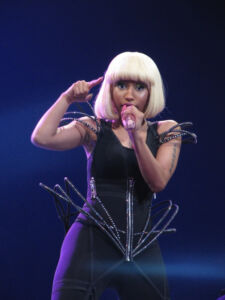 But sometimes a black person does something that is so based that it goes beyond where most normie conservatives are willing to follow. These are usually your Nation of Islam blacks. I’m thinking of when Ice Cube started talking about the Black Cube of Saturn, or when Nick Cannon did an interview with Professor Griff of Public Enemy where they started talking about the Khazar theory.

The story began on August 13. Nicki Minaj is apparently a staunch COVID skeptic and diehard anti-vaxxer. She told her 22 million Twitter followers that she would not be attending the Met Gala because of the event’s requirement that all attendees be vaccinated.

After getting some pushback from pro-vaxxers, Minaj tweeted out this gem: “My cousin in Trinidad won’t get the vaccine cuz his friend got it & became impotent. His testicles became swollen. His friend was weeks away from getting married, now the girl called off the wedding. So just pray on it & make sure you’re comfortable with ur decision, not bullied.”

Is this story true? I dunno. I have my own concerns about the vaccine, but I am suspicious of the “cousin’s friend” stuff. It sounds like an urban legend.

When I was growing up, there was a furniture outlet in my hometown run by two brothers. The brothers appeared in commercials that ran 24/7 on local TV — at least once an hour on all the local networks. There was an area legend that one of the two brothers was gay and on one occasion had to be rushed to the hospital in order to have a gerbil removed from his rectum. Everyone in my hometown had heard this story. Certainly, every kid at my school knew the story. A slew of jokes went around about the guy

It turns out that this was an urban legend that can be found throughout the country, but in each town or city, a different random local celebrity is the target. In some cities, it might be a news anchorman. In another, it might be the president of the nearby college. In mine, it just happened to be a local furniture salesman.

Nevertheless, I’ve met a lot of people who swore on their mother’s life that they knew someone who knew someone who was at the hospital when the furniture guy came in with the gerbil problem. Their brother’s roommate’s sister was a nurse at the hospital, or their cousin’s ex-girlfriend used to date the doctor who personally performed the emergency gerbil removal operation, or their friend use to work with a guy who had broken their arm and was in the hospital waiting room when the furniture guy came waddling in.

So yeah, I’m a little skeptical of Nicki’s “cousin’s friend” story. My guess is she either made it up, or more likely, she is repeating a story she heard and attributing to someone to whom she has a tangential connection to give the story more relevance. I have some sympathy for the anti-vaxxers, but my Spidey senses tell me that this one is a tall tale.

Undaunted, Nicki doubled down on the story, even claiming that her cousin’s friend wanted to speak to her:

Amazingly, Minaj is now claiming that the Biden administration has invited her to the White House: 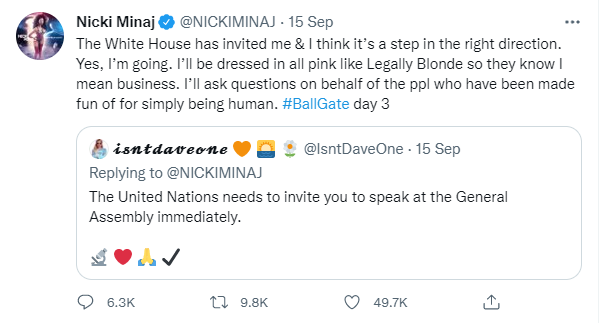 Or perhaps it is not that amazing.

As much as the liberal establishment wants to pretend that anti-vaxxers are all a bunch of MAGA-hat wearing rednecks, blacks are in fact the most vaccine hesitant of all the demographic groups. So, first of all, Nicki Minaj is messing up their narrative. Secondly, this is bad for the Biden administration, as they want to implement vaccine mandates and make it so that you have to get the vaccine to live a normal(ish) life.

But if these new rules come to be seen as disproportionately harming blacks, that’s not good for them. When a black as famous Nicki Minaj starts posting anti-vaxx propaganda, it’s a problem. She is too popular with blacks, and she makes too many Jews too much money to censor, so it would not surprise me if the President really did invite her to the White House to try to turn her to the Dark Side. 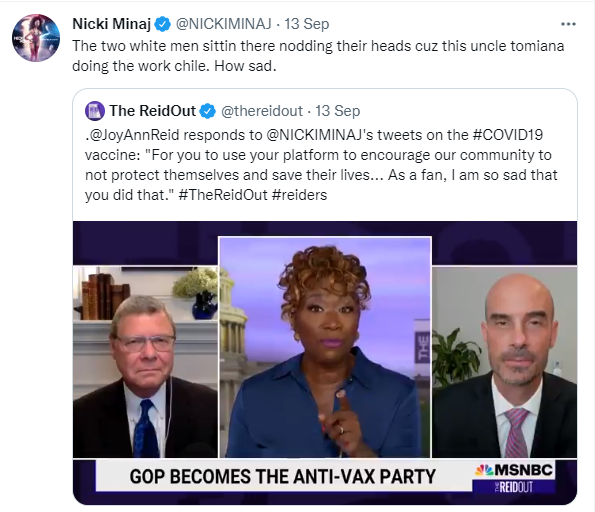 The liberal media made much mirth of Minaj’s “cousin’s friend” story, with many questioning its veracity. A feud broke out between Nicki Minaj and Joy Reid, who chastised Minaj for “spreading misinformation.” Minaj hit back by calling Joy Reid an “Uncle Tomasia” and accusing Reid of being a homophobe. 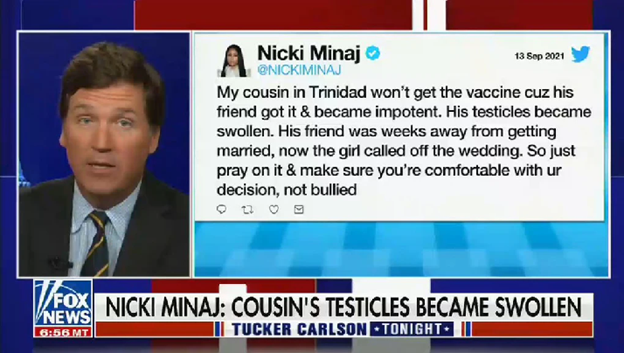 Tucker Carlson ran a segment on the story where he discussed the backlash against Minaj. Then, Minaj tweeted a clip of Tucker defending her along with a bullseye emoji, suggesting that Tucker had hit the mark. This is when things got really interesting.

Right. I can’t speak to, agree with, even look at someone from a particular political party. Ppl aren’t human any more. If you’re black & a Democrat tells u to shove marbles up ur ass, you simply have to. If another party tells u to look out for that bus, stand there & get hit

Generally speaking, blacks don’t seem particularly concerned about people who are overt racists. Rather, blacks are obsessed with the idea that the system is racist. Blacks care about liberal Karens more than they do Stahlhelm-wearing White Nationalists, because Karen will use the power of the establishment against blacks (call the police, complain to the manager, etc.), whereas an open White Nationalist does not have that kind of access to establishment power. Most blacks have probably never met a White Nationalist, but have met a Karen.

As the heat kept getting turned up higher, Minaj continued to double down. In one tweet, she stated,

You know how many US Presidents were white supremacists? Oh please. Just stay on topic. Y’all can’t do that. The topic is: asking questions is OK. but let’s make the topic: Nicki talks to white racists so that you can all sleep better tonight. Dummies

People are always invoking the racism of past presidents to denigrate whites as a whole, as well as America’s past, but it’s been a while since I’ve seen someone invoke the racism of past presidents to defend racists. That’s usually something people on the Dissident Right do to win over normie conservatives. Not sure I’ve ever seen a black person do it.

My reading of the controversy is that it is a case of black stubbornness and ghetto blacks’ willingness to die on the most ridiculous of hills. Minaj told a tall tale and she is sticking to it. She is so committed to her story that she is willing to defend white supremacy rather than back down. Plus, it’s part of her public image to be a bad bitch from the hood who doesn’t take no shit and doesn’t let people tell her what to do. Part of it may also be old-school ghetto ethics of being loyal to people who are loyal to you. Tucker defended Minaj when everyone else was ridiculing her, so she defends Tucker.

I’m not saying that Nicki Minaj is on our side or that we need to appoint her leader of the white race, but it is refreshing to see a high-profile black seemingly immune to the moral panic about white supremacy. This is just a fun story. Whether it moves the needle on the Overton Window remains to be seen.