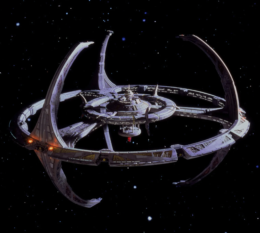 Star Trek: Deep Space Nine is a television series that ran from 1993 to 1999. In contrast with its predecessor The Next Generation, which was inspired by an optimistic vision of a largely peaceful future, Deep Space Nine depicts a less cooperative and more familiar universe. This is apparent not only in the relationships between humans but between alien races. Unlike the way different human races are portrayed in the modern civic religion, these are profoundly different groups of people and the conflict between them is not merely a matter of prejudice.

Robert Louis Stevenson’s story of Dr. Jekyll and Mr. Hyde discussed an attempt by a mad scientist to split the different aspects of his personality into two separate identities. Star Trek’s creators have done the same with several races, each characterized by a particular human trait. The Klingons are violent, the Bajorans are religious, and the Ferengi represent greed.

The Ferengi are a race of cutthroat merchants and their most common exemplar on screen is Quark, owner and operator of the bar on the space station from which the series takes its name. Although Ferengi have little sympathy for other races and would never help them out of charity, Commander Sisko has blackmailed Quark into remaining on the station to entertain the crew and support the local economy. 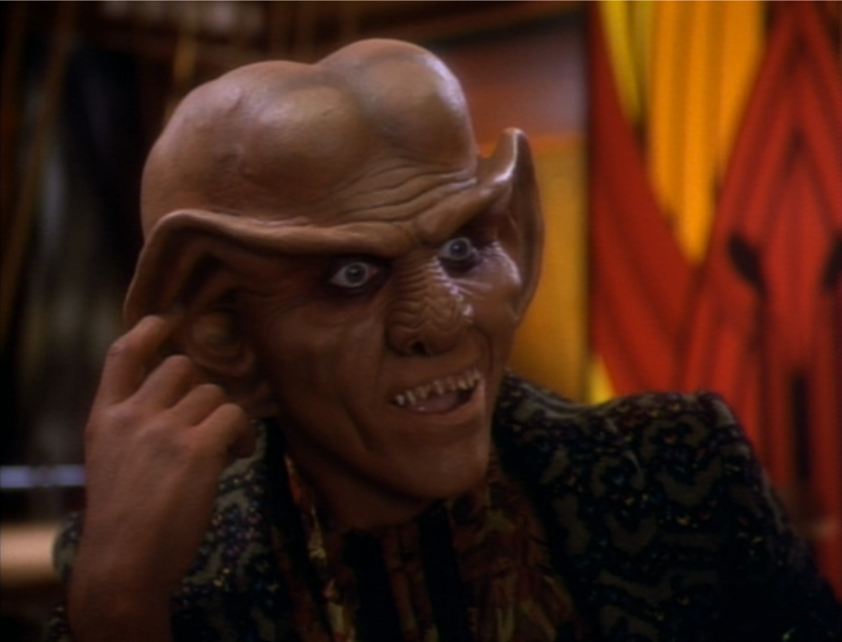 Quark contemplates his new position after Grand Nagus Zek hands power to him.

Everything about Quark is intended to reflect desire. His facial expressions and tone of voice would make his focus clear even if he was speaking Greek. He is always attempting to accumulate more wealth, legally or otherwise, and is distinguished from other races by his luxurious clothing, the better to put a potential customer at ease. His people’s contempt for outsiders never prevents him from expressing sexual interest in foreign women.

Ferengi culture is more thoroughly explained in an episode entitled “The Nagus,” after the great Ferengi leader who comes to visit the station. Near the beginning of the story, Quark berates his incompetent brother Rom, who has just found a beautiful woman’s purse and returned it to her without taking anything. As Quark angrily points out, this violates the Ferengi’s First Rule of Acquisition: “once you have their money, you never give it back.” 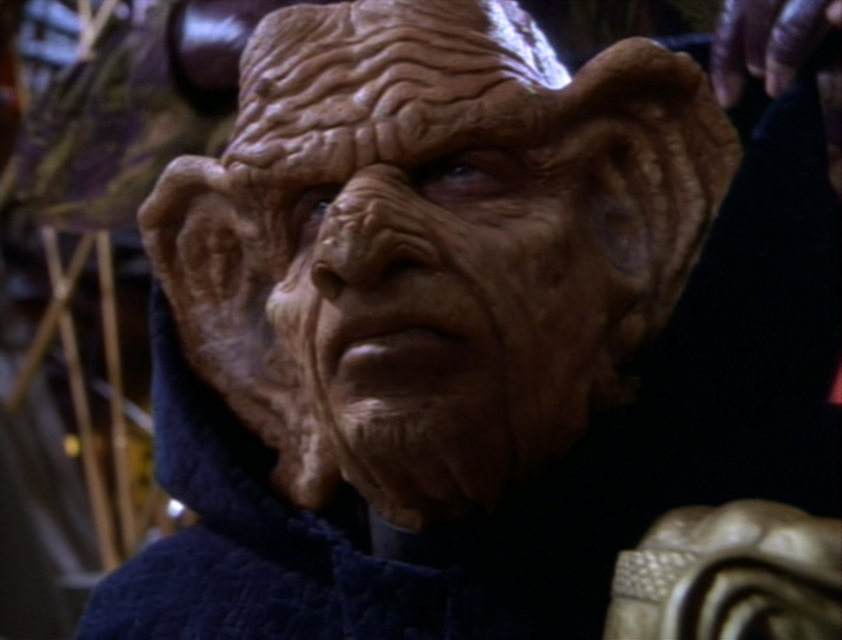 Grand Nagus Zek upon arriving at the space station.

Upon arriving, Grand Nagus Zek first demands access to the holosuite, a virtual reality device in which it is implied he is having vigorous intercourse with simulated women despite his advanced age. After finally having enough of the program, the Nagus demands to be invited to dinner. While eating, he notes that he has just spoken to Quark’s cousin Barbo, who told him of a successful plot between the two of them to sell defective warp drives to a foreign government. Barbo also spoke of how Quark betrayed him to the authorities and left him in prison while absconding with the profits. Zek clearly approves of both actions, pointing out that the Sixth Rule of Acquisition states, “never allow family to stand in the way of opportunity.”

The Nagus soon calls a meeting of Ferengi where they discuss their future business endeavors. They gloat that in the newly accessible Gamma Quadrant, no one is familiar with the Ferengi, so they will be more easily swindled. Zek then announces that he is naming a successor. “I’m just not as greedy as I used to be,” he explains, so he is handing power to Quark. On hearing this, every other Ferengi present storms out. 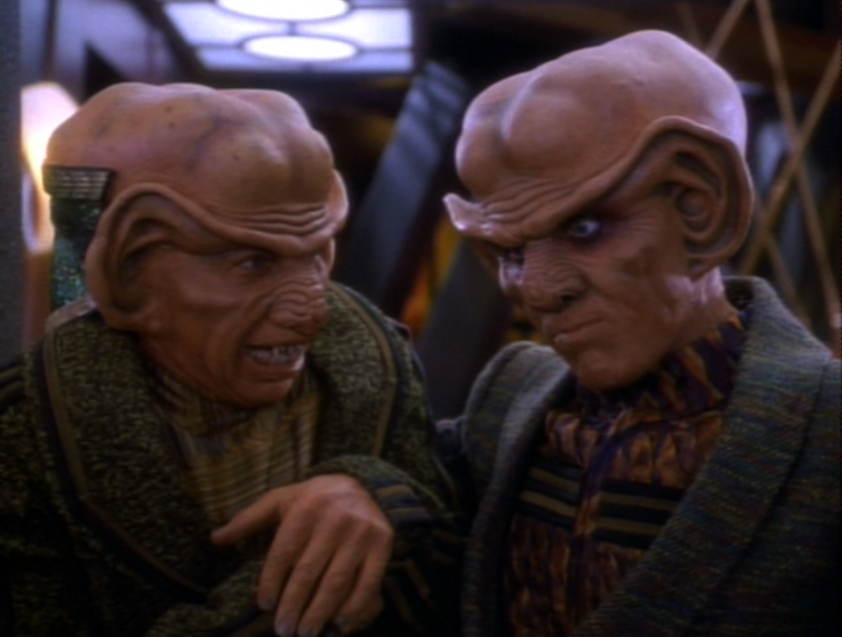 Quark berates his incompetent brother Rom for not taking an opportunity to steal.

Quark soon learns that he has enemies. One Ferengi named Grall soon approaches him and warns that he might be in danger unless he guarantees his new “friend” preferential access to resources in the Gamma Quadrant. Panicked, Quark asks the Nagus for advice, and he responds with an interesting summary of Ferengi thinking: “To survive, you must surround yourself with loyal men. But not too loyal! Never trust anyone who places your prosperity above their own.” He concludes with “Remember, when in doubt, be ruthless,” before suddenly falling unconscious.

Convinced that the Nagus is dead, his coethnics hold a funeral, where according to their custom, they buy and sell dessicated pieces of what they believe is his body. Rom asks Quark if he can take over his bar now that he is busy being Nagus, at which Quark mocks him and laughs hysterically. This shows the typical level of social harmony among the Ferengi. 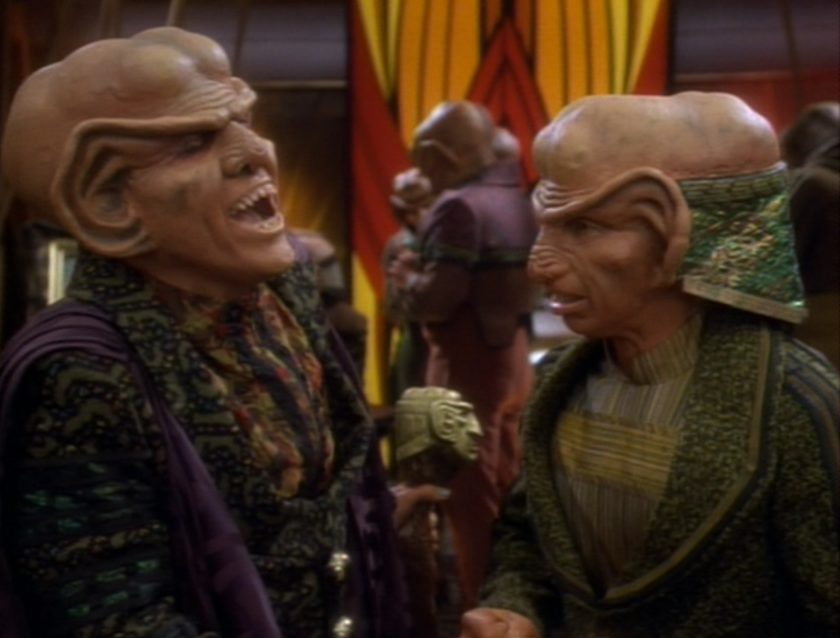 At Zek’s funeral, Quark laughs at Rom’s request to take over the bar.

Although Quark believes he can trust his brother, Rom conspires with Zek’s son Krax to assassinate him, which would allow Krax to become Nagus and Rom to take over the bar. During the second such attempt, when the two are about to throw Quark out of an airlock, the Nagus returns to berate them for their incompetence. As he explains, he had only faked his death by putting himself into a trance, this being a test which his son “failed miserably.”

Krax had hoped to “grab power,” but as Zek explains, “you don’t grab power. You accumulate it quietly, without anyone noticing.” He suggests Krax could have spent time eavesdropping on customers at the bar, learning all he could about new opportunities in the Gamma Quadrant and engaging in business endeavors of which Quark was nominally in charge. At some point after this arrangement was well-established, he might actually take power. 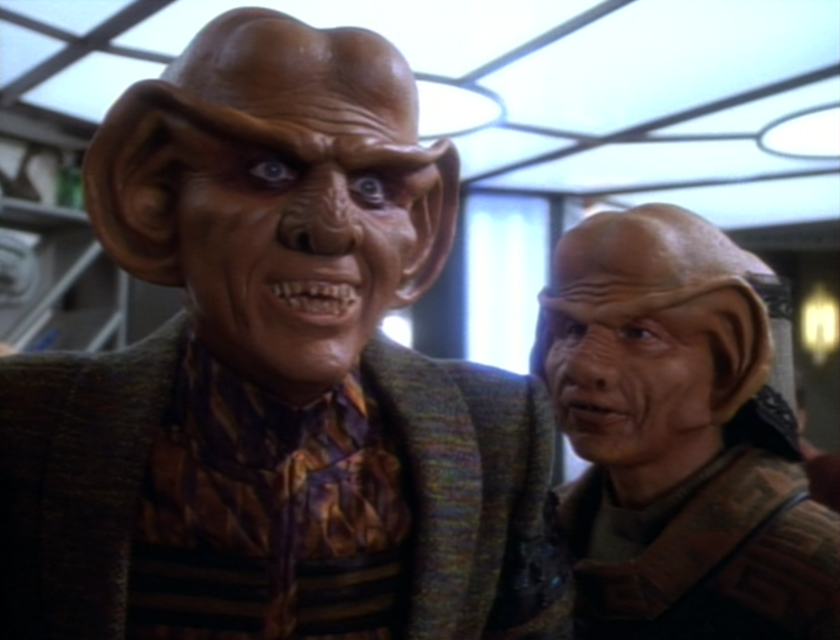 Quark anxiously responds to the arrival of the Nagus and his son Krax (right).

Another quality that distinguishes the Ferengi is that they are often keen to flatter others. This is not only because of their constant interest in finding new business partners, but because they lack the bonds of respect that more cohesive societies share. Quark is comically anxious to avoid offending the Nagus, as Rom is towards Quark, because they know their superiors would not hesitate to mistreat them if provoked.

The one thing that Ferengi respect is skill in seeking power or wealth. Just as Zek praises Quark for gaining profit dishonestly, Quark has a similar response to his brother’s schemes against him. Once Quark is out of harm’s way, Rom attempts to apologize, but the bartender responds with “Why, brother, I didn’t think you had the lobes [balls]! Such wonderful treachery deserves a reward!”

The Ferengi’s focus on desire is further reflected in their attitude towards women. The women of their own race have low social status, being forbidden from owning property, earning money, or even wearing clothes. Ferengi women reportedly never argue with their husbands, and Lieutenant Dax, a female officer of another race on the space station, describes them as spending their lives “naked and submissive.”

In one episode, a Ferengi woman disguises herself as a man and earns the respect of Quark and the Nagus with her business acumen. However, when she reveals her gender to Quark, he faints, and when she does the same to the Nagus, he is disgusted. The three of them had been working together, meaning both men were guilty of a crime; according to Ferengi law, anyone who allows a woman to represent him in business can be put in prison.

This view of women implies that they see them in purely materialistic terms, as a physical asset to be acquired. This desire even overrides their usual cultural chauvinism; despite their contempt for other races, they often express lust for foreign women.

Ferengi culture is also expressed through the character of Nog, the teenage son of Rom and friend of Commander Sisko’s son Jake. He has been attending school on the station with a human female teacher, but the Nagus is displeased when he hears of this. Keen to impress the Nagus, Rom takes him out of school.

Nog at first defends this situation, arguing that Ferengi do not belong in school because there is no profit in it, and implies that they do not even belong around humans like Jake. As Commander Sisko points out, the two races have very different values and have “never been able to form a common bond.” Although he generally advocates friendship between different races, he does not approve of his son spending time with Nog, whose pastimes include playing pranks and ogling foreign women. Ultimately Jake begins giving Nog private lessons, which his father does approve of. 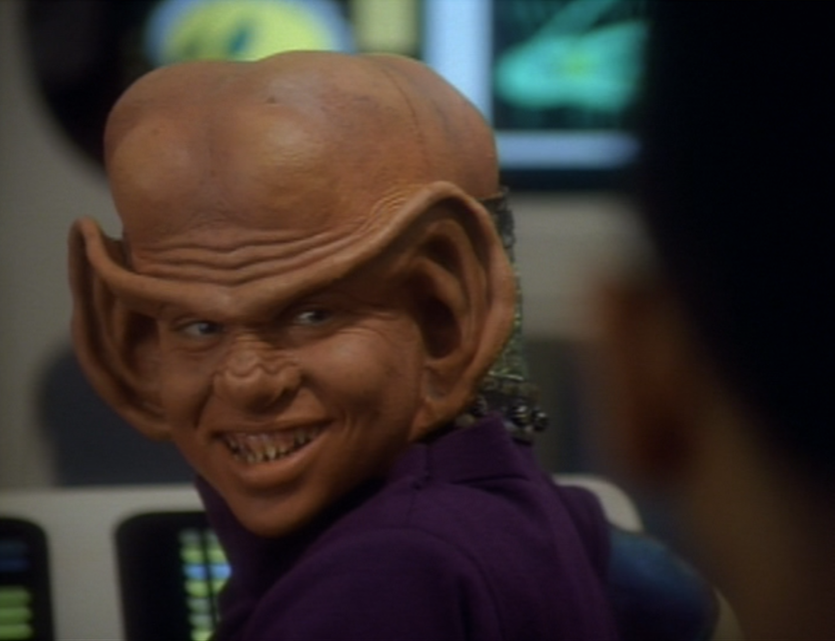 Nog is pleased to see his friend Jake back up his story that Romulans stole his homework.

The Ferengi have been criticized as being based on “anti-Semitic stereotypes.” They are materialistic, deceptive, anxious, and when not attempting to flatter others, they are rude. The actors playing Quark (Armin Shimerman), Rom (Max Grodénchik), and Zek (Wallace Shawn) are of Jewish ancestry, while the actor playing Nog (Aron Eisenberg) was adopted and raised by Jews. However, considering the taboo against anti-Semitism and the fact that series creators Rick Berman and Michael Piller were Jews themselves, it is unlikely that this was their intention. Shimerman noted at a Star Trek convention in 2016 that fans in different countries ask if the Ferengi are intended to represent different ethnic minority groups. He argues that the race simply represents “the person who lives among us that we don’t fully understand.”

Despite sharing some of the same producers, Deep Space Nine contrasted with its predecessor The Next Generation in having a greater focus on personal relationships and politics — the type of petty conflict which fans presumably turn to science fiction to escape from. However, cultural conflicts make the series more interesting than what might otherwise be a soap opera in space. They may even unwittingly make the viewer consider ethnic and national differences in the real world.

« The Only Battle We Remember

» The Evolution of the Anti-War Film, Part Two: The Four Horsemen of the Apocalypse