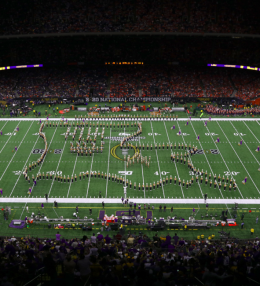 I have a friend who’s a big sports fan, especially college football. He’s crazy for the local State university (which we will call “State”) and hates the slightly more prestigious state University (which we will call “the U”). It’s really not hate, of course. It’s more of an identity/anti-identity thing. Despite not having attended either university, he has always identified with State, which, in his local setting, also means identifying as not-U. Apparently, one cannot identify with both universities simultaneously and be taken seriously by any sports fan in the area. This friend goes to all the games and wears all the apparel. He knows the coaches. He’s up on all State-related football minutiae and possesses a Jeopardy-level knowledge of State football history.

One year, after State had failed to bowl and the-U hadn’t, I provoked him with this novel question regarding this intense sports rivalry: Why don’t we set aside local prejudices and root for the U in its bowl game since a U victory would be a boon for the state economy?

He scoffed at me and told me I was crazy. He would pull for anyone against the U.

Now, this friend of mine is pretty based. Despite being easygoing and socially liberal, he’s aware of racial differences. He’s not going to frequent American Renaissance over it, but he identifies as white — albeit in a thoroughly non-confrontational way. He digs black culture and music (Motown and funk, not hip hop and gangster rap), and all his life seemed perfectly happy with a multiracial America.

After a recent conversation, however, I learned that he’s becoming more and more frustrated with black crime, black preferential treatment, and the overt black supremacy in the form of Black Lives Matter. He was especially appalled at how black athletes (and quite a few white ones) were now kneeling during the National Anthem. I spilled the beans regarding my evil thoughts on race realism, and we ended up agreeing about pretty much everything. I detected he didn’t like black people all that much anymore. I also learned that this lifelong Democrat voted for Donald Trump in 2016. This was a big change for him.

Then, I asked him another novel question about his beloved (or be-hated) sports rivalry: If State fielded an all-black team, and the U an all-white one, would he still pull for State?

He said that he would.

I then reminded him of his frustrations with black people, and he didn’t care. I argued that both universities not only discriminate against whites through affirmative action, but promote anti-white hatred in their curricula and beyond. He said that none of that mattered. He was a true-blue State fan. And that was that.

This got me to thinking about the Dissident Right and how it relates to mainstream white Americans. People in the Dissident Right identify, I can safely assume, as whites first, Americans (or British or Swedish or what have you) second. On the other hand, mainstreamers like my friend are Americans first, State fans second, and white people third, if at all.

Now, why is this? And why today when our mainstream culture is just seething with anti-white hostility? There are perhaps several reasons, not least of which are lack of institutionalized support, fear of the enemy, and an honest belief in the mushy-gushy anti-racism we’ve all been brought up with. But that can’t be everything. Over seventy-four million Americans voted for Trump, and hundreds of thousands showed their support for Trump at the US Capitol on January 6. Clearly, not all of these people are afraid of the Left, nor are they anxious to spill platitudes about racial equality.

Then why do they insist on keeping the red and the blue with the white?

One answer could be that the only thing keeping the historic American nation glued together with bubblegum and Play-Doh these days is white people. More specifically, patriotic, Christian white people. The moment, say, twenty percent of these people start putting race over flag and cross, then it’s game over. The United States would fall apart, quickly and most likely violently. Therefore, if you’re white and you love America, then you’re probably thinking that the big red button on your dashboard which says “RACE” will cause your vehicle to self-destruct rather than eject you to safety.

These people who go to the wall for Trump and attend MAGA rallies and sport the red, white, and blue really do love America. It’s as if the America of 1965 has crystalized in their minds and they want to keep living in that world. And who could blame them? It was a great world. Do they know any other? Within their patriotic mindset, how do they know that a race revolution among whites would improve upon their idealized America — or even the degraded one we have today? And from their Christian perspective, whites who harp nonstop about their race are so exotic they might as well be pagans — or Nazis.

As with my friend, “American” is their chosen identity. It’s what they know, and they’re sticking with it — even as everything burns all around them.

When I see whites like my friend sporting their university colors, waving their university flags, and attending their university’s sportsball events, I see people expressing their Americanness. This is just a more immediate — and perhaps more playful — version of the stars and stripes or the Gadsden Flag. Sure, George Washington did something heroic at Valley Forge, but did you see the eighty-six-yard run my boy pulled off last night at the university stadium just forty-five minutes from my house? And unlike Valley Forge, nobody got killed. Win-win!

They love this vison of America, suppressed as it is. They love it so much they would rather try to revive it than contribute to its breaking apart. It’s pathetic and honorable at the same time. And I can relate. As many readers of this site know, I follow mixed martial arts. One thing that draws me to the sport is how un-playful it is. Unlike with football, in which teams symbolize armies and the game symbolizes warfare, there’s nothing symbolic about getting your nose smashed or your elbow bent in an unnatural direction. It’s about as real as you can get.

Of course, I almost always pull for the white guy. I say “almost” because there has been one instance in which I did pull hard for a black over a white. In 2013, black UFC light-heavyweight champion Jon Jones defended his title against a mouthy middleweight named Chael Sonnen, who is white. I did not want this fight to take place. Sonnen was not a legitimate contender in the light-heavyweight division, and wasn’t even the best middleweight in the UFC, having been recently stopped in the second round by longtime middleweight kingpin Anderson Silva. Further, Jon Jones was proving to be the UFC’s most dominant light-heavyweight champion. The fight was clearly a mismatch. The only thing Sonnen did to earn this title shot was to run his mouth — which he does very well, by the way. Naturally, I did not want him to win, not because I like Jones more than Sonnen or because I enjoy watching blacks beat up on whites. I pulled for Jones, whom I don’t like, over Sonnen, whom I do like, because I care about MMA, and I don’t want illegitimate champions. I want the clarity brought about by legitimate champions. It wasn’t even about race. I would have pulled for any legitimate light-heavyweight champion over Sonnen that night.

So my interest in MMA transcended my racial allegiance that evening — an extremely rare occurrence for me. Clearly, an exception. For my friend, however, it’s the rule. If he were in my place, he would have pulled for Jones in his two fights against the ethnically Swedish Alexander Gustafsson because both my friend and Jones are, strictly speaking, American.

For my friend, the red, white, and blue (or the blue and orange, or the crimson and silver, or whatever color combination belongs to a person’s university) trumps the most important color, that of skin. It is an artificial identity, and it cannot continue as the Left keeps growing more militant and anti-white. The problem, however, is that these universities deliver sports entertainment so well that it would be exceedingly difficult to un-mesmerize people like my friend. I actually attended a football game at a major university recently, and so have seen this phenomenon up close. The raw, pounding enthusiasm that 50,000 people can generate over a sporting event is both awe-inspiring and intimidating. How can anyone argue against that? Such people seem to be immune to argument because we’re not arguing against other arguments but against an identity — superficial as it is — which gets bolstered with every T-shirt, bumper sticker, and foam finger purchase.

Only the cruel and tortuous revelations of history could possibly crush false identities such as these. Only when the non-white Left ascends to the point of overt anti-white oppression will most people like my friend realize that they had been had. Only then will they realize how much time they had wasted identifying with institutions that truly despise them. Will it be too late when that happens? Perhaps, but since we don’t know for sure, we can’t stop trying. We owe it to the future of Western Civilization be as eloquent and relentless as possible while convincing whites like my friend to abandon their university colors and their national colors, and keep the only one that matters.