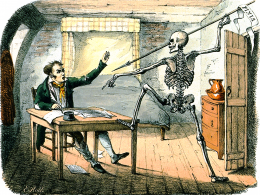 It always sounds silly to me when people tell the dead to “rest in peace.”

Practically speaking, don’t you have to disturb their rest to tell them that? It makes about as much sense as nudging someone who’s snoring to say, “Hey — HEY! Wake up and go to sleep.”

The superstition about “speaking ill of the dead” likewise strikes me as entirely nonsensical. They can’t hear you — they’re dead. Speak as maliciously as you want about them, and it will still have zero effect on them. I think you should be much warier of speaking ill of the living, because you might hurt their feelings and they could wind up killing you. But being dead and all, the dead pose no such threat.

Likewise, the term “life after death” makes as much sense to me as the concept of “youth after old age.” It’s chronologically ass-backward.

I will turn 60 in about two weeks, and I sense that I’ve already had the Grim Reaper ring my doorbell more times than most people who reach this age. There was a massive brain tumor back in 2008 that caused a seizure which temporarily caused me to stop breathing, my heart to stop beating, and my face to turn blue. And during that temporary bout of clinical death, I saw absolutely nothing, which leads me to believe that once you die, you cease to exist.

Or at least the self ceases to exist — or the soul, the spirit, the animating force, whatever you choose to call it. This is why I suspect that both the Abrahamic religions and the Hindu-derived religions have it entirely backward. The only element that continues to exist after death is the body, and it is only “reincarnated” in the literal sense if worms or buzzards get to feast upon it.

The Abrahamic religions teach that the body is what dies and the soul persists. So do Buddhism and Hinduism. And my suspicion — I never profess to have any beliefs, because new evidence could always come trickling in that might undermine my suspicions — is that these belief systems have such perennial appeal to humans precisely because they offer comfort to biological organisms who are hardwired by evolution to perceive one’s eventual nonexistence as a fate worse than hell.

Speaking of hell, as someone who was raised Catholic, I had once had a third-grade teacher tell me I was going to roast in hell forever merely for singing “Happy Birthday” aloud in class when she told us that Christmas was Jesus’s birthday. In my early teens, when I started reading the Bible in earnest, I was mentally tormented after reading all the verses about the fiery furnace and the weeping and gnashing of teeth and the punishment of eternal fire, where their worm dieth not and they shall cry out for water and get none and their fire shall not be quenched and they shall be an abhorrence to all flesh.

But then I became a man and put away such childish things and realized that exposing children and young people to the looming prospect of such unending terror was a form of child abuse. I also suspected that whatever the governing force of the universe is, it is not some allegedly loving, forgiving, but tantrum-throwing psychopath who tortures the majority of his creations for eternity simply due to their petty misbehavior over the course of 70 or so years.

Regarding heaven, promising people happiness AFTER you die was one of the sickest con games in history. Yes, I’m aware of Pascal’s wager, but I’ll flip the script and present Goad’s wager — if nothing actually comes after this life and you fritter away the hours and days and years and decades denying yourself happiness and carnal pleasure in the service of some cockamamie metaphysical fable for which there is entirely no proof, you’ve wasted all of your poker chips.

Late last September, five of the 12 biopsies the urologist took of my prostate gland came back positive for cancer. The biopsy had been ordered because my PSA levels were a highly suspicious 4.5. Back then, I only told close friends and employers about the biopsy results.

Precisely because I very strongly suspect this is the only life I will ever get and I want to strangle every last drop of enjoyment out of this life and ensure that the few that I love manage to stay happy after I inevitably go, I summoned every last electron in my thunderbolt-level willpower researching my treatment options. After about six weeks of dogged research, I selected a procedure that wouldn’t leave me impotent, in diapers, or risking a new bout of cancer from radiation. It cost me $20,000 out of my pocket, but I doubt that money would have done me any good if I was dead. Post-operatively, I soldiered through catheter bags, a 106-degree fever from sepsis due to the catheterization, and a wickedly painful round of epididymitis that had one testicle swollen to the size of an orange. My operation was in early November; in late December, my PSA levels had sunk to 1.3. A couple of months ago, the levels tested at 0.8, which my urologist claimed were “shockingly” low — so low, he declared me cancer-free.

As a sixty-year-old looking at the actuarial tables, it’s a safe bet that I’ve already seen more days than I will see in the future. It would be easy to brood and wax nihilistic, but nihilism is depressing, and I can’t afford to spend whatever time I have left on this planet being depressed. If you insist on pinning me down to one philosophical orientation, it would probably be that of the existentialist. I’ve spent enough time as an animate being in this universe to suspect that if the universe cares about us at all, it has a funny way of showing it. My feeling is that the universe is entirely indifferent to our existence. But a quirk of being human is that I sense a need is wired into us biologically — no matter how individually weak we may be, remember that at least we were the fastest and most determined spermatozoa out of the whole sticky load — a need to find meaning in life lest we go insane.

After all these years, suspecting that there is no life after death has taught me to savor how precious every moment is. The best way to live life fully is to operate under the idea that death is the end of the line for you. After death, you won’t even rest in peace, because “you” will be gone even before rigor mortis sets in. Or, as it was put in Ecclesiastes 9:5, contradicting much of the rest of the Bible:

“For the living know that they will die, but the dead know nothing; they have no further reward, and even their name is forgotten.”