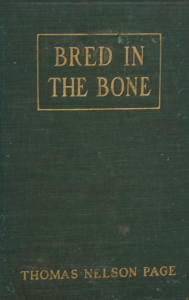 Bred in the Bone, a 1904 novella by Thomas Nelson Page, epitomizes race realism through the proxy of horses and horse racing. It also embodies the author’s characteristic nostalgia for the aristocratic white supremacy of the antebellum South. In a sense, it is the perfect Thomas Nelson Page story. We have an idealized hero and heroine, a profound sense of honor and identity, healthy doses of black dialect, and a heartfelt expression of the respect and cooperation which can exist in a racial hierarchy. Although the story takes place in the recent past, it harkens back through the mists of time where history and memory become legend. Instead of Lancelot and Guinevere, we have the valiant young Theodoric Johnston and the beautiful and dignified Catherine Ashland.

The story takes place perhaps in the 1880s and opens with a former slave known as Colonel Theodoric Johnston’s Robin, who is the much-revered stable boss at the Jockey Club. Right away, Page links this central and sympathetic character to the white, patriarchal past by naming him through his former owner. There is very little about horses or horse racing that escapes this black man’s attention, and no one, white or black, doubts his expertise. Robin also reveres for his former owner, the late Theodoric Johnston, who ran a great horse stable “befo’ ‘de wah,” but whose fortunes sadly declined after the fall of the Confederacy.

On this one particular evening, however, Robin is out of sorts. He has learned that the Colonel’s grandson, also named Theodoric, will arrive soon on a horse he wishes to run in tomorrow’s race. Robin hadn’t seen young Theodoric since the war, when was a small boy, and is fretting over his chances. For this is no ordinary race — many of the nation’s top horses will be there. No one is giving young Johnston a chance, if they even know he is competing at all.

The deep chest, the straight, clean legs with muscles standing out on the forearms in big knots, the fine head with its broad, full brow, its wide eyes full of life and intelligence, the delicate muzzle, suddenly caught his eye.

Robin inspects the animal from head to hoof in wonder and then asks its young owner:

“What you says he pedigree?”

This is real horse talk, and Fanny Washington and Revenue were real horses, champions both. Horse breeders care very much about pedigree, because pedigree can make itself manifest on the racetrack.

So we have an upset in the making, but you wouldn’t know it from the fashionable people in the stands. This includes Colonel Ashland and his beautiful daughter Catherine. Surrounded by her father’s knowledgeable friends, Catherine is gently teased over her keen interest in this unknown horse and its gentlemanly rider. Earlier that day, young Theodoric had doffed his hat to the fine lady and expressed hope that his performance would be worthy of her. The gentlemen acknowledge the prestige of the boy’s grandfather and the fine appearance of his horse, but still give him little chance in such a high-stakes race. Catherine, on the other hand, decides on the spot to back him and makes several friendly wagers with her father’s friends. After this comes perhaps the story’s most telling passage:

“Well, what are you going to do? How do you stand?” his friends asked.

“A good chance to win. I don’t know what that new horse can do, of course; but I should not think he could beat Hurricane.”

“Of course, he cannot,” said Mr. Newby. “Ridden by a green country boy!”

“He has some good points and a fine pedigree.”

Mr. Newby raised his eyebrows. “So has his rider; but pedigrees don’t count in riders.”

“I never could understand why blood should count in horses and not in men,” said Miss Ashland, placidly. “Oh, I hope he’ll win!”

This reminds me of a joke:

Father and son go to the park where they see a number of dogs playing in the grass. After observing the dogs for a while, the son asks, “Why do all the dogs look so different?”

Father: “That’s very astute, son. The dogs look different because they have different lines of ancestors. They are different breeds.”

Son: “And some breeds are faster than others.”

Father: “Yes! They have been bred by people for different purposes. And so the selective pressure of many generations have caused some breeds to be quicker than others.”

Son: “And some breeds seem to be smarter than others. Why is that?”

Of course, the race is as thrilling as the reader would hope. So not to spoil the ending of this fine story, I won’t divulge the clever twist in the end. Suffice to say, the identity and honor of Johnston are severely tested but win out. After the race, this Mr. Newby offers Johnston a lavish sum for his horse. Johnston is tempted, but ultimately refuses when he learns that Newby would change the animal’s name as soon as he buys him. J. D. stands for Jefferson Davis, you see. And this green country boy comes from Virginia.

As the boy leads the horse away, Colonel Ashland recognizes his similarity to his esteemed grandfather and admires how such men are bred in the bone.

The charm of the best fiction of Thomas Nelson Page rests not in its realism but in its romance. The key to the great success he enjoyed as a bestselling author in his day was his ability to get his reader — both Yankee and Southern — misty-eyed about positive, pre-war Southern archetypes, which, in turn, recall Sir Walter Scott and Thomas Malory before him. To best enjoy his work, we must turn off our modern cynicism, abolish all sardonic irony, and see Progress as a Bad Thing. We must live in the past to some extent and let ourselves be carried away with what should be (or should have been) rather than what is. Yet, the lasting worth of Thomas Nelson Page’s fiction — at least from a Dissident Right perspective — is his unrelenting race realism. Of course, few in Page’s day would have found his fiction terribly realistic. In terms of plot and character, Page’s stories draw from legend and myth as much as from everyday life. However, his race realism is based firmly in truth, as are the political ideas which stem from this realism.

Bred in the Bone is no exception in either case. It’s high in romance and high in race realism. And aside from the story’s deft construction, suspenseful plot, and loving focus on horses and horse racing, it’s this thematic counterpoint that keeps the story fresh after so many years. Bred in the Bone is also a cautionary tale. Yes, Page was a benevolent white supremacist. He understood and appreciated black people without ever taking his eye off the truth about them. But in the Robin character, he symbolizes the decaying resistance to the threat Progress posed against both white supremacy and this benevolence. Early in the story, Robin has to fend off waves of childish derision from a “mongrel population” of stable boys who know nothing of slavery and how servitude, when done correctly, can indeed provide direction and order to lives that would be wayward and shiftless without it. The skills Robin learned as a slave had served him well throughout his life.

“Well, I guess freedom’s better ‘n befo’ d’ wah?” hazarded one of his tormentors, a hatchet-faced, yellow stable-boy with a loud, sharp voice. He burst into a strident guffaw.

“Maybe, you does,” growled Robin. He edged off, rubbing his ear. “Befo’ de wah you’d be mindin’ hawgs — what you ought to be doin’ now, stidder losin’ races and’ spillin’ somebody’s hosses, mekin’ out you kin ride.” A shout of approving derision greeted this retort.

Later, when another upstart, “a dusky young mulatto, clad in a ragged striped sweater,” challenges Robin on his illiteracy, Robin strikes back cuttingly:

“I can’t read not much better than you ken ride,” retorted Robin. This was a crusher in that company, where riding stood high above any literary attainment; for the other had been a failure as a jockey.

He tried to rally.

“I’ll bet you a hundred dollars I can–”

Robin gazed at him witheringly.

“I know you ain’ wuth it now.” (I just have to repeat that brilliant line.) You cannot find a more savage and hilarious rejoinder to Progress than that.

Yet, Robin is old. His mongrel antagonists are not. What happens when Robin dies, and the ideal of white aristocratic civilization as embodied by the antebellum South fades from memory — especially the black memory? As history has shown, it creates a vacuum that gets filled by Progress and the lie of racial egalitarianism. Page has no answer for this, and it demonstrates the limits of his benevolent white supremacy — he ends the story strongly hinting at a future collaboration between Johnston and Robin, as if this could resolve the problems caused by Progress.

For all the value found in Thomas Nelson Page’s best fiction, his belief that whites and blacks can coexist in a system that reflects their obvious racial differences has proven to be as costly as it is false. His clear-eyed, well-meaning race realism should be commemorated and certainly led to some wonderful stories — especially Bred in the Bone. But the most valuable lesson we can derive from the fiction of Thomas Nelson Page is that race realism is not enough. In truth, racial diversity is a hopeless project, and sadly all the Colonel Theodoric Johnston’s Robins of the world cannot change this. If whites cared about their own pedigree as much as they care about the pedigree of horses, they would seek separation from other races, not collaboration.