Proud of Being Guilty: Fighting the Stigma of Lawfare in Sweden & Winning 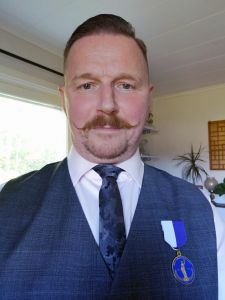 Björn Sjöman, a proud recipient of the HMF Medal who doesn’t believe in silence.

Since July 2 of last year, people who have been prosecuted under Sweden’s so-called hate crime legislation during the last few years have begun receiving medals in their mailboxes. This important project was started by a group of patriots who are trying to remove the stigma associated with these “crimes,” instead turning it into an honor — tangible proof of resistance against what is happening to our country.

Sweden’s hate crime legislation goes back to 1948, when it was introduced at the behest of Jewish lobby groups in the United States to stop the antisemitic publications of Einar Åberg. For several decades, it only existed as the rarely-used criminal charge hets mot folkgrupp — incitement against an ethnic group — henceforth HMF.

At the beginning of the 21st century, the usage of HMF to silence critics of Sweden’s radical racial and ethnic transformation has exploded. Between 1990 and 2016, the number of cases of HMF reported to police authorities went up from 44 to 994.

In 2017, a state-sponsored NGO was launched by a failed former police officer, Tomas Åberg, with the stated purpose to bring more people to “justice” for spreading “hate” on social media. It was called Näthatsgranskaren — literally the “[worldwide] web hate monitor.” The number of HMF cases reported to police more than doubled in the first year of its existence and was up to 2,508 cases in 2018.

Approximately 20 percent of the cases reported to the police get prosecuted, according to Tomas Åberg himself. Once in court, nine out of ten people are convicted. HMF is punishable by up to four years in prison, but convictions almost invariably result in a fine and sometimes a suspended prison sentence.

Even those not brought to court are usually subjected to interrogation by police, and sometimes also to house searches, computer seizure, and other degradations.

Where the line is drawn for what is considered “criminal speech” no one actually knows. Some of the convicted have written that certain ethnic groups are ”worthless parasites” or similar. But people have also been convicted for writing ”filthy Muslim” as a comment to (yet another) Swedish woman being raped by Muslim immigrants; for pointing out that Africans have a lower IQ average than Europeans; and for simply suggesting that all African migrants should be sent home.

This all creates a chilling effect where people are afraid to speak out against the rapid replacement of ethnic Swedes. Sweden’s immigration policies are extreme by any objective measure; according to Pew Research, more than 30 percent of Sweden’s population will be Muslim by 2050, from being an almost negligible part of the population as late as in the 1980s.

The stated purpose of the “HMF Medal” is to counteract this chilling effect and make people less afraid and ashamed — even to make them proud — of being prosecuted under the unjust laws being brought against them.

“Above all, we want people to stop being afraid of speaking out. Nothing is more dangerous than silence in our current situation”, says one of the patriots involved in the project.

The medals have been sent out to a majority of those Swedes who have been prosecuted for HMF during the last five years.

The project’s raison d’etre is explained:

The purpose of the HMF Medal is to rebel against the state-induced anarcho-tyranny by giving support, community, and courage to people prosecuted for HMF, thereby taking the edge off the most effective and nefarious weapon our abused judiciary uses to discourage criticism against the state-enforced power structure and its values or public outcry against its consequences. This is done by a medal and a cover letter.

Anarcho-tyranny denotes a situation where the bureaucratized state is more liable to cow and subdue its citizens so they don’t rebel against the ruling class (tyranny) instead of subduing actual criminals (who create anarchy). Laws are upheld selectively depending on the perceived interests of the ruling elite. One example of this is the de facto condonation of illegal immigrants.

The recipients of the HMF Medal should feel honored, proud, and distinguished in wearing it. They should be aware that their prosecution and/or conviction is a feather in their cap, a warrior’s mark that they will carry for the rest of their lives, and that the Medal is a material recognition and expression of this fact.

Many obviously unjust prosecutions and convictions are mentioned on the site.

After reading about a gang rape where several Somalis violated a 13-year-old girl to the point of damaging her genitals, a man wrote that he wants all Somalis repatriated. He was prosecuted for HMF.

Two immigrants published an online video with the message: “Us Arabs are here to take over your f-ing country, so get down on your f-ing knees and suck my d-k, little Swedish whore.” A man reacted to this by writing “Arab scum.” He was prosecuted for HMF and sentenced to a stiff fine.

A video was spread online where an immigrant punches a woman in the face several times. A man comments that we should not bend our backs before “these disgusting parasites.” He was prosecuted for HMF and fined.

Those behind the project are anonymous. When interviewed by the newspaper Nya Tider (New Times), a spokesman for the project says they are ordinary people who are reacting to an obvious injustice.

“The judiciary, specifically the HMF law, is used ever more openly to suppress public reaction against the politics being waged,” says the spokesman. “Common citizens who get upset over immigrant crime and write angry comments in social media are hunted down by police, and this is done both to silence them and to make an example of them so others are afraid to speak up. We want to turn the stigma of being singled out as a criminal into a distinction — by being prosecuted for HMF, you have shown that you do not pliantly accept what is happening. Being a thought criminal is nothing to be ashamed of, quite the contrary!”

Asked about a statement that the recipient’s conduct doesn’t have to be beyond reproach in every respect, the spokesman explains:

Well, have you ever read about someone who got prosecuted for defending himself against criminals and thought, “that guy should have a medal for what he did”? Perhaps even though he used more violence than absolutely needed? Same principle.

Swedes are oppressed in a very tangible way. They are on the road to becoming a minority in their own country, they are forced to pay for the welfare of immigrants, and they are subjected to anti-Swedish hate crimes like gang rapes and abusive robberies. Reacting to this by becoming angry and possibly using language that you would otherwise refrain from is not just reasonable, but in fact laudable. It’s right and proper to be angry. But when Swedes get upset about gang rapes, crimes, and such, the regime strikes down with all its might and they get prosecuted. That is sick. That is unfair. . . .

In many cases, people have been sentenced for HMF without even using crude language. Almost any statement criticizing “protected minorities” can be interpreted as running afoul of the HMF law, which in itself means it’s an unjust law. But even those who have used such language. . . obviously, the pensioner who reads about a gang rape of a young girl and reacts by writing that all Arabs should be shot doesn’t mean this literally, he or she is simply irate. And has every right to be! The notion that such a statement is akin to some plan for genociding Arabs is absurd. That’s why we will be giving this medal to the vast majority of those who are prosecuted for HMF, regardless of how they expressed themselves. Those few we do reject are primarily people who are convicted of actual crimes at the same time.

The medal is adorned with the Latin saying Dixi et salvavi animam meam, which the spokesman says is composed of two Bible quotes and means ”I have spoken and saved my soul”. It also has the legend ”1984”, a reference to George Orwell’s famous novel where dissidents are persecuted as the state turns truth on its head.

Finally, after a few months’ preparations, a small team gathered at the assembly line for putting the actual deliveries together and having them posted to the first major batch of 370 unsuspecting medalists, just before the official launch. Here are stickers, posters, personally addressed letters, a stack of stamps, envelopes, and a pile of medals.

This was the first recipient from the first batch, who immediately called the web magazine Nordfront, which resulted in the first report on the web about the project.

As the project launched there was already a very fine article prepared for publication in the excellent printed news magazine Nya Tider. 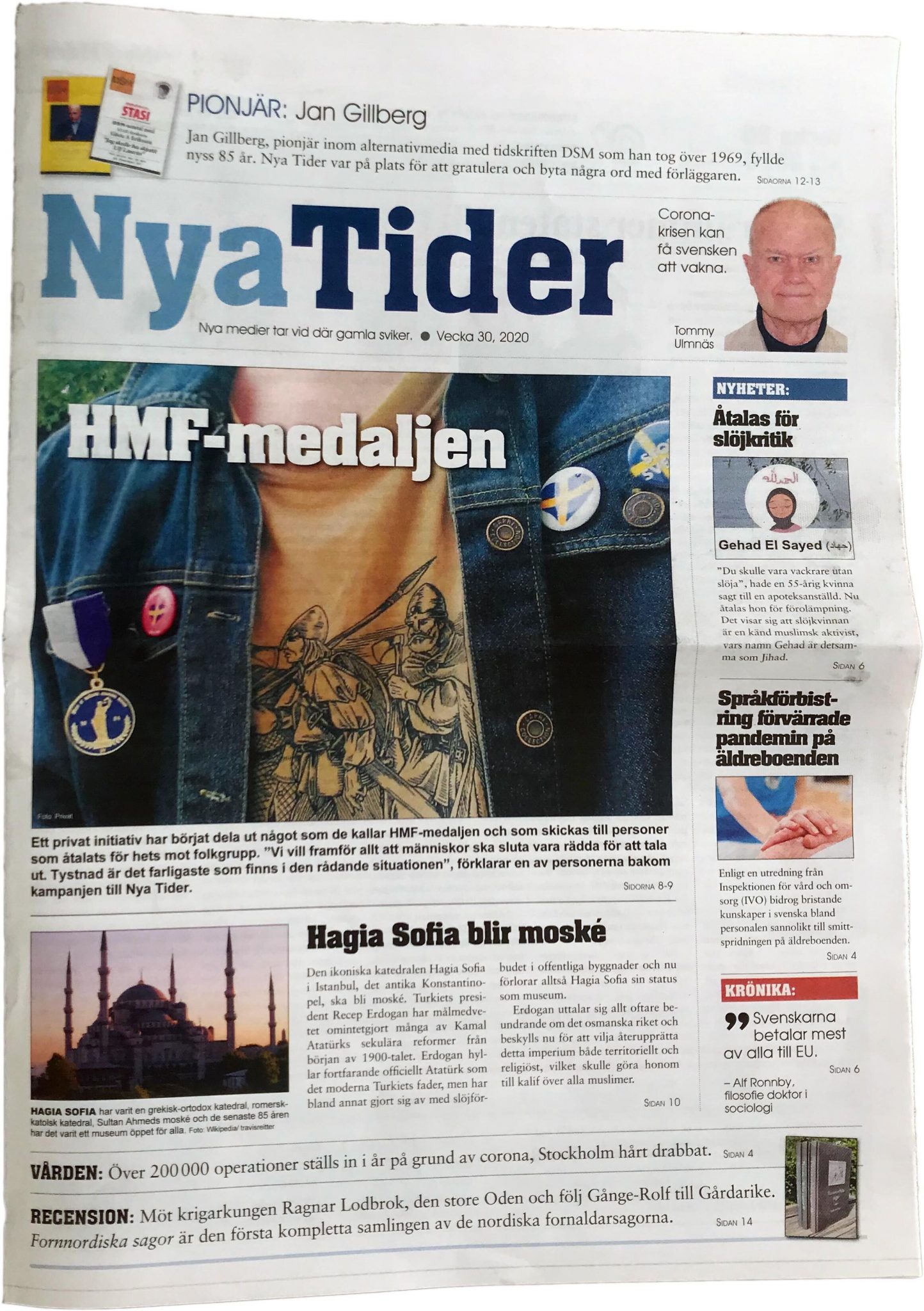 The project has also been featured in Expo, the sister magazine to Britain’s Searchlight. They were not as positive about it as Nya Tider. 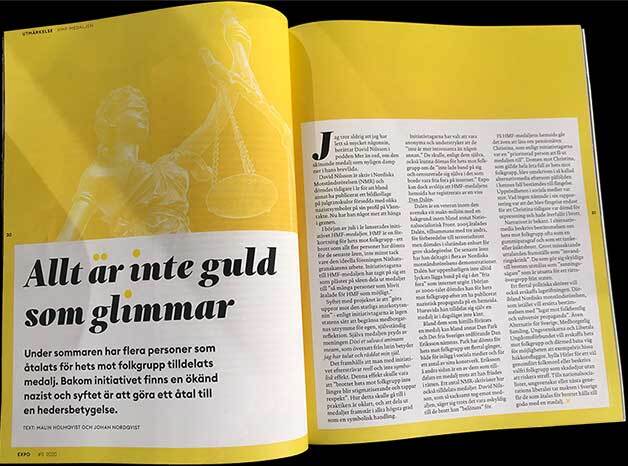 Dan Park has been convicted of speech crime more times than probably anybody can keep track of, and he has served several prison sentences. Being an artist, he puts his creations in the streets and public spaces. His works are edgy and satirical, and he never quits. 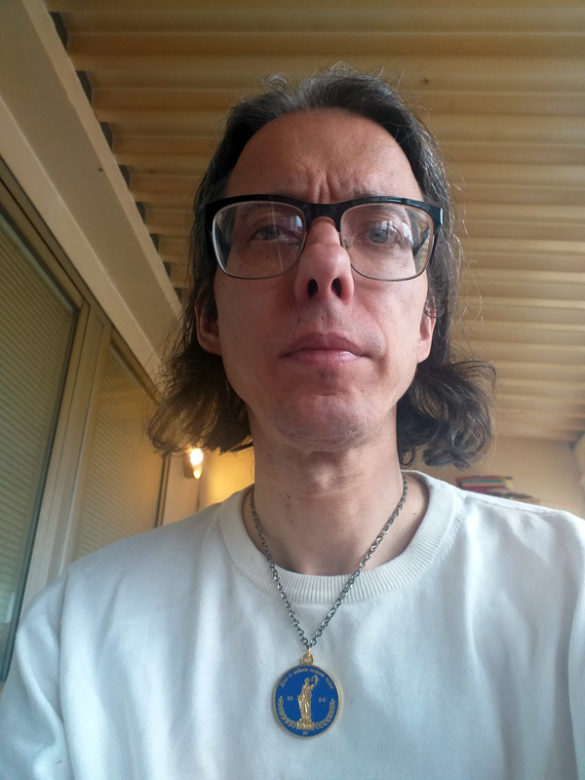 Arne Weinz, a successful and wealthy serial entrepreneur and author of several books, displaying his medal at an alternative book and media fair. 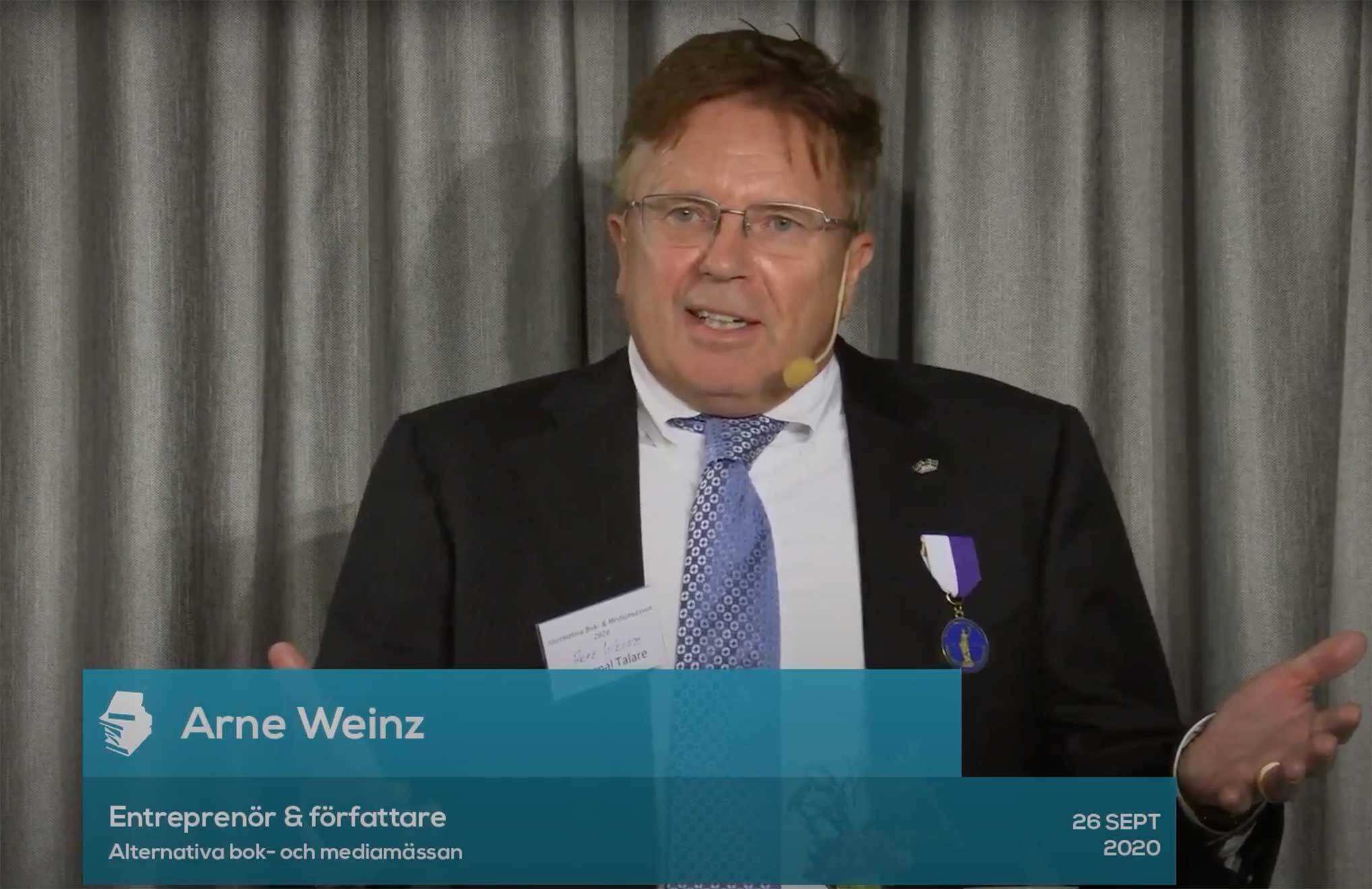 Björn Björkqvist, a veteran Swedish publicist with a track record of free speech harassment that probably can only be matched by Dan Park’s ditto.

Swedish journalist and free speech activist Ingrid Carlqvist as a guest at Rair Foundation USA. Watch her talk about the HMF medal — which she is a well-deserved and proud owner of — in English at 7:55 into the show.

Christina Öberg (depicted here with her lawyer) is a retired lady who has been terrorized by both Afghani immigrants and the state. She had to serve a prison sentence for violating Sweden’s hate speech laws. Watch her tell her own important and heart-breaking story subtitled in English a couple of years before she was awarded the HMF medal. 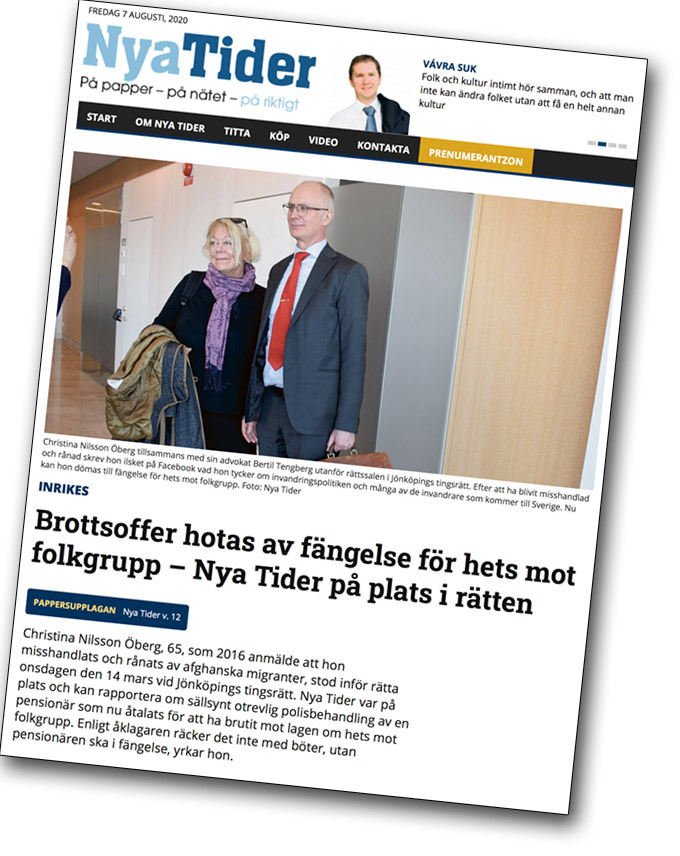 Veteran Dan Eriksson from Det Fria Sverige and the show Radio Svegot is very happy as his co-host Magnus adjusts his glasses.

Below is the two-page letter which accompanies the medal, which you can click to enlarge. 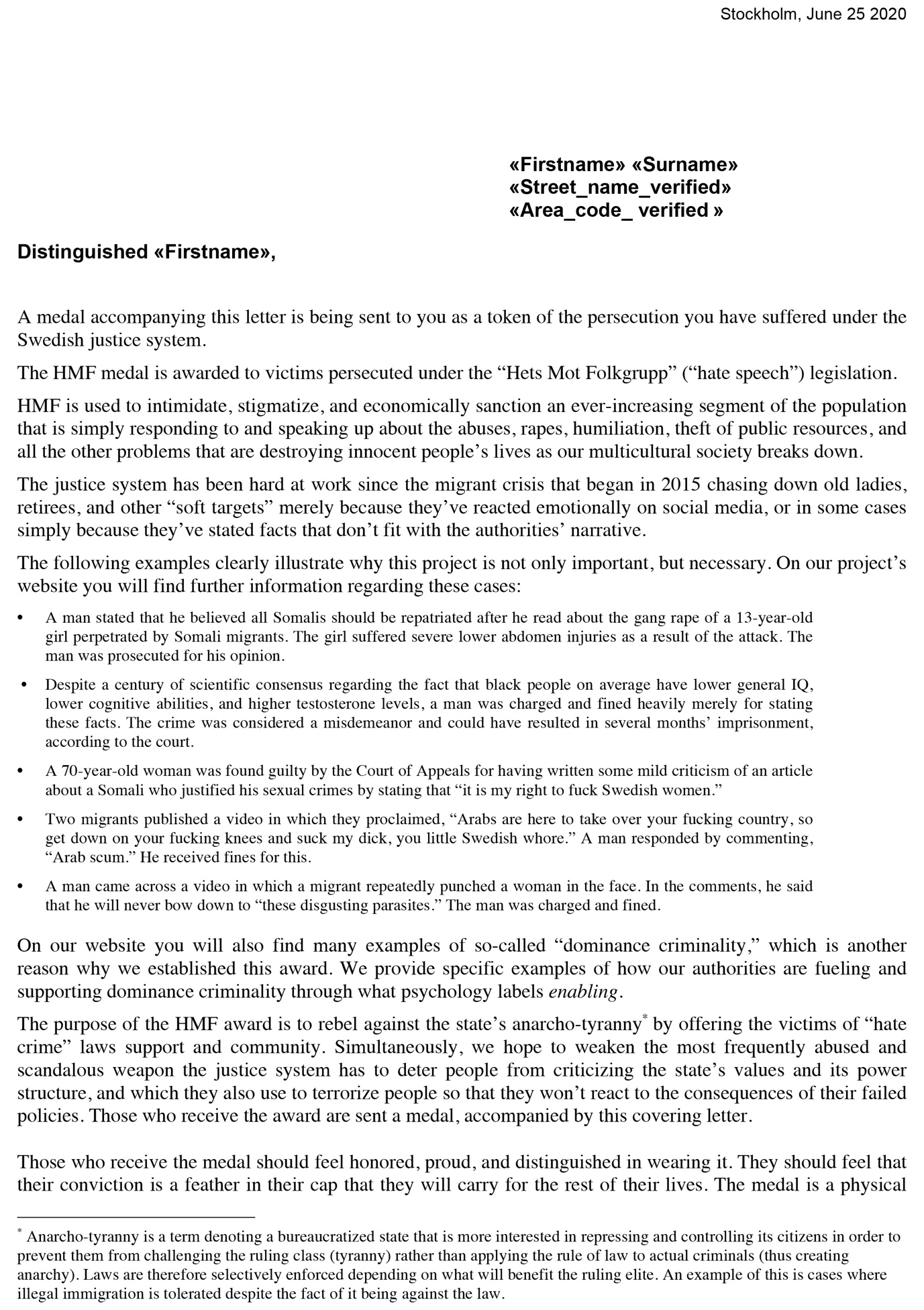 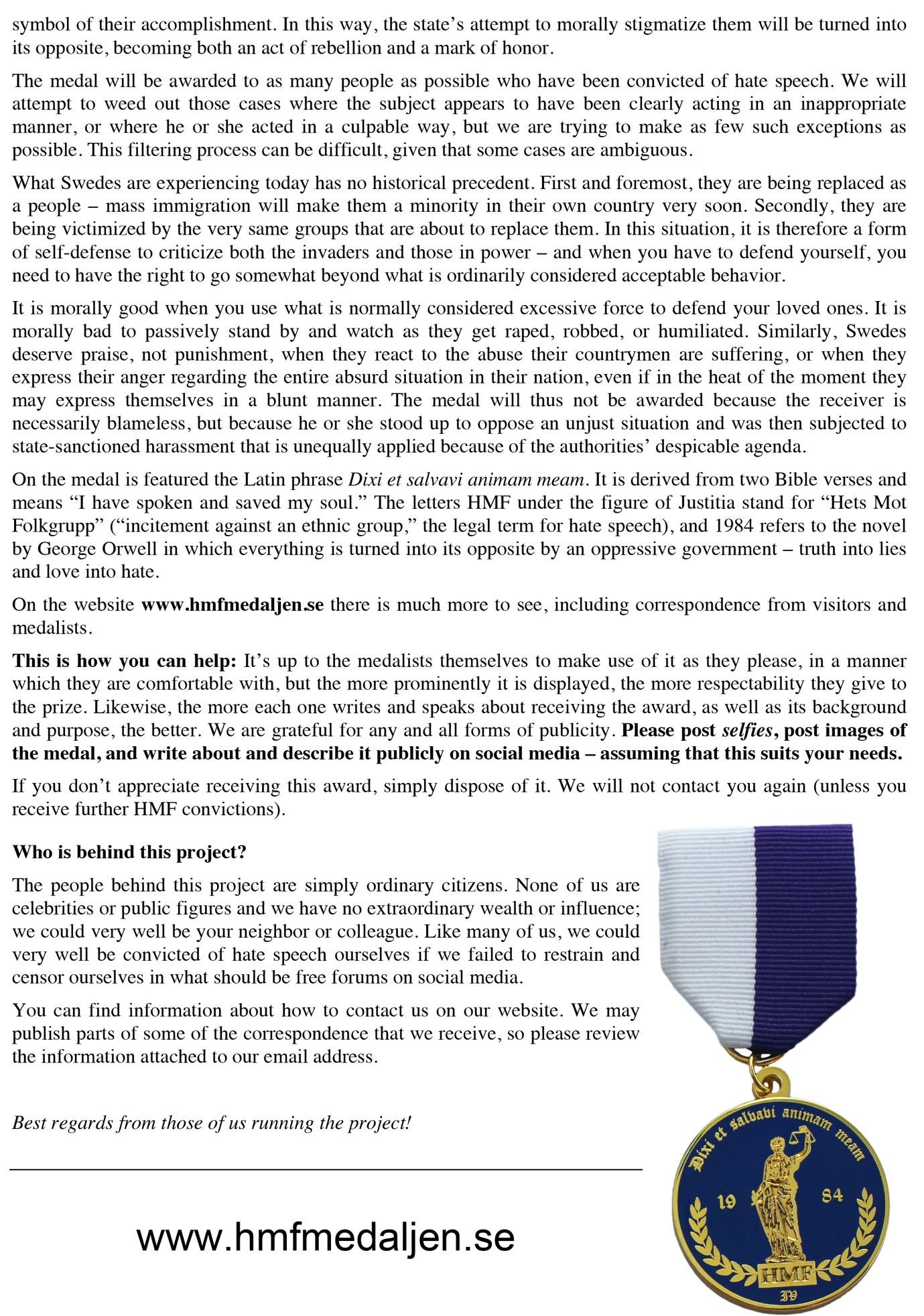 We who run the project HMF-medaljen would like to emphasize that it is very well suited for export to other countries like Britain, France, or Germany (or any country, for that matter). It can be tailored according to local circumstances and opportunities. If you are involved with nationalists who just might be able to pull something like this off, then please talk with them and feel most welcome to contact us for help, tips, or direction at [email protected].

« For the Paywall Page