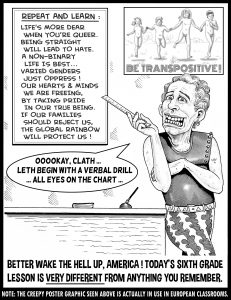 If you are familiar with the Looney Tunes cartoon character Pepé Le Pew, you’d know that he’s a lascivious skunk with a French accent who repeatedly mistakes a female cat for a female skunk and tries to date-rape her in various ways, always to no avail.

The comedy from his failed attempts at snagging himself some female skunk tail is not wrought from the fact that he’s a sexual predator — rather, since Pepé has no idea how to score with women, he serves as the object of both our pity and scorn and is thus a tragicomic prototype for latter-day “pickup artists” such as Roosh V.

You may have been blissfully unaware that Pepé was an arch-enabler of rape — that he “normalized rape culture and patriarchy,” at least according to this black dude who lives in Florida and thus makes life a little less comfortable for all the elderly Jews who fled to the Sunshine State hoping for a little peace and quiet in their twilight years. In an essay with the obstreperous title of “Pepe Le Pew Is the Mascot of Sexual Harassment: A Retrospective on Growing up With Rape and Consent Culture in 80s Pop Culture,” a “bystander intervention specialist” and “relationship coach” named Richard Wright says:

Each episode is the same: Pepe nonchalantly stalks her for the whole show, flirting with a French accent, tries to hold her against her will and kiss her, while the cat scrambles out of his arms time and time again, scrambling for sanctuary from her insistent, clueless pursuer. It doesn’t help that Pepe is a stinky skunk whose scent wilts flowers as he walks by. . . . Pepe Le Pew provided just one of many cues I received as a teen in the 80s that normalized rape culture and patriarchy.

As a child, I was led to believe that Blackness was inferior. And I was not alone. The Black society into which I was born was riddled with these beliefs. . . . At every turn, at every moment, I was being baptized in the narrative that everything white was right, good, noble and beautiful, and everything Black was the opposite. . . . Some of the first cartoons I can remember included Pepé Le Pew, who normalized rape culture; Speedy Gonzales, whose friends helped popularize the corrosive stereotype of the drunk and lethargic Mexicans; and Mammy Two Shoes, a heavyset Black maid who spoke in a heavy accent.

Does Mr. Blow deny the existence of fat black maids who speak with heavy accents? Does Mr. Blow not realize that neither Pepé Le Pew nor Speedy Gonzales were Negroes? And does Mr. Blow really want to talk about black people and rape? He should be thankful that the worst depiction of black people he could dig up was some ancient cartoon about a fat mammy with a thick accent.

Sometimes a guy gets the feeling that black people aren’t nearly as grateful as they need to be if we want to keep pretending we have a society here, people.

Since they’ve snatched away Mr. Potato Head, Dr. Seuss, and Pepé Le Pew from American children’s clutches in the past few weeks, where, oh, where will our young’uns turn now for edification and amusement?

A recent viral video suggests the answer may lie in a cute little kids’ book called The GayBCs. In the video, a four-year-old boy is shown reading aloud that “A” stands for “ally” and “B” stands for “bi.” Other letters in the GayBCs teach impressionable and highly plastic young minds that “I” is for “intersex” and “Q” stands for “queer.”

According to the publisher’s description:

A playdate extravaganza transforms into a celebration of friendship, love, and identity as four friends sashay out of all the closets, dress up in a wardrobe fit for kings and queens, and discover the wonder of imagination. From A is for Ally to F is for Family to Q is for Queer, debut author/illustrator M. L. Webb’s bright illustrations and lively, inclusive poems delight in the beauty of embracing one’s truest self. A glossary in the back offers opportunity for further discussion of terms and identities. . . . The GayBCs is perfect for fans of “A Is for Activist” and “Feminist Baby” — showing kids and adults alike that every identity is worthy of being celebrated.

One winds up pining for the wholesome old days when Mr. Potato Head had a penis, Pepé Le Pew was date-raping cats, and Dr. Seuss was warning American children to be suspicious of Orientals due to their congenital sneakiness.

Study: NBA Is Racist Against Blacks

If you’ve lived in America for most of your life, you’d realize that one thing black people may like doing more than raping and murdering is complaining about how bad black people have it in America compared to, say, Swaziland.

You’d think that in a nation that is still clinging to 60% non-Hispanic whiteness, someone would make a big stink about the fact that of the top ten highest-paid NBA players, eight are coal-black and the other two are mulattoes.

Or maybe someone would see tremendous social injustice in the fact that some of these brain-dead ball-dribblers rake in more every year than the GDP of several African countries.

But nooooo, the black-guy and white-guy “researchers” found to their extreme dismay that if you focus on bench-warmers — the players who average less than 20 minutes per game — 33% of black players were already retired from the league after five years, while “only” 26% of white players were.

The researchers did not take issue with the fact that 65% of bench-warmers are white, whereas only half are black. Nor did they consider that maybe some of the black NBA players were leaving the league earlier because, oh, they’d shot someone or someone shot them.

Instead, the black researcher — he has a dumb black name, in this case “Davon” — hints at deeper systemic anti-black bias in pro hoops:

If there is going to be anywhere in America where you would expect there wouldn’t be racial disparities, it would be the NBA. But even here we find there is an advantage to being white for most. . . . For those on the bench, being white really gives you an advantage. . . . We have these cultural stereotypes that white men distinctly lack ability at basketball, but our analysis shows that this has little bearing on how long they last in the league.

You can tell that never once in this man’s life has he ever had to run from a cheetah.

Roger Caldwell is a columnist for the Florida Courier, a newspaper whose motto is “Sharing Black Life, Statewide.” In a recent essay titled “WHY WHITE PEOPLE ARE LOSING IN THE POPULATION RACE,” Caldwell quotes another black blogger who calls himself “Joe Dubs”: “Europeans aren’t having children anymore, at least not at replacement levels. White people, it seems, might soon be a thing of the past.”

Although this is a topic I’ve covered quite recently, the esteemed Mr. Caldwell puts his uniquely black spin on it:

White people in America know they cannot wipe out all the people of color because they reproduce too fast. In five to 10 years, the African continent will be the most populated continent on the planet. . . . As more White people become homosexual, there are less White children who are being born. . . . White men have become angry with everything, while White woman [sic] are marrying people of color. As more White men continue to buy guns, the question must be raised, “What is the purpose of all the guns?” . . . White anger and racism are not going away because everything that White people control is received through violence and war. . . . Everything is taken by force and buying guns will not change the fact that White people are disappearing.

Imagine being black in 2021 and saying whatever you want to say with absolutely no fear of repercussions. White privilege? I wish!

I think if we’ve established anything with this week’s column, it’s that black Americans are egregiously ungrateful — so much so, they aren’t even thankful when you call them “coons,” knowing full well that there are several more hurtful words that you could have chosen.

But “the NAACP and several parents are calling for change” in O’Fallon, Missouri, after a photo emerged on social media showing five white teachers spelling out the word “COONS” while playing a game of “Human Scrabble.”

Officials at the Christian School District pecked out a desperate apology attempting to link the crucifixion of Jesus Christ with the notion that teachers should never assemble in order to spell out the word “COONS”:

Christian School District desires to be a place where all people encounter . . . an end to division between races through the unity offered by Christ. Over the weekend pictures were posted to a personal page on social media featuring Christian School District employees. One of these pictures included an abbreviated word that has racial connotations. . . . We recognize that this ill-informed action caused hurt and offense to many students and families in our school and in the wider community.

But Pastor Raymond Horry, a black parent of two black children in the school district and an NAACP member who, at least from that linked video, appears to run around onstage screaming at the audience while he wears a football jersey, implied that racist liars in the school district tried to excuse the shameless act of coonery by claiming the teachers were trying to spell “RACCOONS” but couldn’t find all of the letters:

They were running around trying to spell raccoon, but they didn’t have the R and the A. I don’t believe it that five Caucasian teachers, not one of them knew that. Maybe one didn’t know it, maybe two didn’t know it, but all five didn’t know it? . . . Like everything else that we’re seeing in America, there are no consequences for people’s actions. This has come to be demoralizing and then we get these students in the school and there is no representation of them, no one in the yearbook of authority that look like my children.

But raccoons — at least around the eyes — look far more like your children than any of those white teachers do. This is an established scientific fact that you’d look foolish attempting to deny, Mr. Big Black Preacher Man.

Although Sigmund Freud may have been correct when he said that sometimes a cigar is just a cigar, he clearly avoided the topic of kombucha and the fact that white people can never manufacture nor enjoy fermented foods and beverages without being guilty of cultural appropriation and the large-scale genocide that invariably follows in its wake.

Dr. Miin Chan is perhaps the least attractive Asian woman I’ve ever seen. She looks like Ian Miles Cheong after a sex change, or maybe a probiotic bacterium under a high-intensity microscope. Giving further heft to my long-held contention that when Asians take the social-justice route they are the most bitterly humorless and vengeful of all nonwhite groups, Ms. Chan recently penned an overlong jeremiad for Eater.com about how the stench of whiteness permeates the pickled-food industry:

This tempeh-gnawing ingrate vows to bring equity to the fermentation industry “even when it is uncomfortable for white fermenters.”