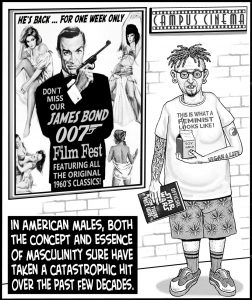 As someone who was born at the tail end of the Baby Boom, I was raised in a world where white people popped out kids in numbers that would put modern Hispanics to shame.

My mother was one of eleven kids. My father was one of four. I was also one of four. The family in the brick row home to our left had a half-dozen. The family to our right had only two children, and back then I honestly wondered if the dad suffered from diminished procreative powers. It was something that people in the neighborhood whispered about — for a white man back then to only have two children meant there had to be something wrong with his plumbing.

Nowadays, I struggle to think of any other adult white Americans I know that have children. If forced to guess, I’d say one in ten of them has even bothered to breed.

I recall the intense hype back in the 60s and 70s that we were facing, to use Paul Ehrlich’s phrase, a “Population Bomb” that would have the world so overcrowded by the year 2022 that we’d be eating little green crackers made of dried human flesh and that conditions would be so miserable, the elderly would be flocking to government-sponsored suicide clinics. One of the mantras of the 1970s Left was “Zero Population Growth” (ZPG), but over time, they realized it would be racist to mention where all of the growth was occurring, so they have largely kept silent about overpopulation.

But while the Population Bomb continues exploding in Africa and your occasional towelhead fiefdom, it has fizzled out in every area on the planet that matters if you care about white people existing 100 years from now.

In the salty old year of 1800 — when the USA was 81.1% white, unlike today, where non-Hispanic whites teeter at around only three-fifths of the population and are set to become a minority within a generation — the average woman cranked out seven children from ’tween her loins. By the 1950s, American females were still churning out nearly four bambinos per vagina.

Hispanics are out-breeding blacks, who are out-breeding whites, who are just slightly out-breeding Asians, which comes as a bit of a surprise to me. If things proceed as the demographic prognosticators expect, whites will dip below half of the total American population over the next 20 years or so.

But overall, American women — including the notoriously fecund Latinas — are not breeding at a sufficient clip to replace the population.

Enter the immigrants to save us all from our self-imposed sterility.

In 2018, there were slightly over one million legal immigrants to the USA. Of these, only about 85,000 of these immigrants came from Europe. According to recent stats, only about half of European immigrants to the USA come from Western or Northern Europe — the traditional stock of colonial America. So, taking those 2018 stats and assuming that half of the Euro-migrants are Slavs, Dagos, and other such non-traditional white Americans, less than four percent of modern legal immigrants are coming from the areas whence the original white Americans came.

To hear some of the arch-prudes of the Neo-Metaphysical Right tell it, America is awash in rampant sexual degeneracy: Children are hypersexualized right out of the womb, teenagers are experimenting with 31 flavors of sexual deviancy, and even senior citizens are wantonly spreading herpes and chlamydia via bawdy nursing-home Viagra parties. The Anti-Degeneracy Squad appears to be under the misconception that sexual activity is at an all-time high — it’s just that contraception and elevated levels of homosexuality are driving down the birthrates.

The truth is that fewer younger people are having sex these days compared to previous generations.

Why does reality contradict expectations? Why, with the entire world immersed in an electric brothel, is each new generation more prudish than the last? According to Kate Julian, author of the Atlantic piece:

I’d say “all of the above” is a safe answer. And add to all that the fact that #MeToo has rendered many modern men terrified of ever touching a woman for fear of inevitable rape charges looming somewhere down the line.

The sad scientific fact is also that men aren’t nearly as manly as they used to be. Among Western men, sperm counts plummeted nearly 60% from 1973 to 2011. In a Massachusetts study, median bioavailable testosterone nearly halved among men over a 15-year span ending in 2005.

Dowell Myers is a professor who studies demographic trends at USC. He says that America’s imploding birthrates are not only a “crisis,” they are a “barometer of despair”:

The cost of housing, the cost of education, all these things have become more and more difficult. I think the boomers themselves don’t realize how much harder it is for millennials today. And they think, “Oh yeah, when we were young we had to live, you know, on very little money, and we made do, and you can do the same.” That’s the story, right? Well no, it really is a lot harder for young people today. It’s amazing how much harder it is. . . . We need to have enough working-age people to carry the load of these seniors, who deserve their retirement, they deserve all their entitlements, and they’re gonna live out another 30 years. Nobody in the history of the globe has had so many older people to deal with.

This bespectacled schmuck — who doesn’t appear to be far from boomerdom himself — expects boomers to be compassionate toward the new waves of young, low-T, infertile, sexless androids when he describes boomers as an inconvenient economic problem “to deal with”?

A giant difference between the boomers and the younger generations is that the boomers liked to FUCK. And to BREED. Not as much as their ancestors, mind you — but much more than their descendants. Better a baby boomer than an anime masturbator.

Young white people, I implore you to free yourself from the prudish shackles and diminished libidos under which modernity has suffocated you. Rather than being fruity, I insist you be fruitful and multiply instead. If you don’t want to go the way of the dodo bird, you’d better start breeding.

And you can’t start breeding if you don’t start fucking.

« Adam Curtis’ Can’t Get You Out of My Head