The Dark Side of QAnon Part One: Kids in the Lion’s Cage 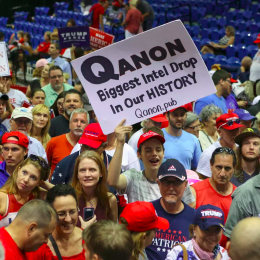 I’ve been thinking about QAnon a lot lately.

When I think of QAnon, I’m mostly just annoyed. From the right angle, the QAnon movement looks like a Ferrari on cinder blocks. A movement as large, as passionate, and with the kind of missionary zeal of QAnon could do some serious damage to the system if they knew what the hell they were doing and if they understood what the hell they were up against.

Another example is the whole GameStop thing. A bunch of chan kids on Reddit bought a ton of GameStop stock with the spare change that they managed to scrape out from underneath their sofa cushions and succeeded in giving some oligarchs a bloody nose. Not bad. But just imagine if those QAnon boomers had taken all that money that they made selling out our country to Jews and dumped it into GameStop. The oligarchs wouldn’t just have a bloody nose. They would be completely fucking decapitated.

Now, I am a pragmatist. I accept that not everyone is cut out to be a radical or a dissident. There is a lot of risk involved, and not everyone can afford those risks. And, to be quite frank, some people are so dumb that I wouldn’t want them on my side. They would only slow us down. We’ve all heard what our ideas sound like when argued poorly, and if someone cannot advocate for these ideas effectively, then it would be best for all parties for them to just stay out of the way.

Sure, in a perfect world, I would like for every white person to be a committed ethnonationalist. But where we are at this particular moment in time and space, we have a lot of work to do before that can become a reality. In the meantime, seeing that some people either can’t be or are not cut out to be white nationalists, I think there is some value in having one or more “Junior Varsity” teams where well-meaning whites can go and make themselves useful while also staying out of our way. Somewhere that is not the Left and not Conservative Inc. We have other issues beyond race. If someone doesn’t want or can’t be a white nationalist, he can argue against internet censorship, government corruption, or one of our other less controversial issues.

QAnon would be ideal to serve that role — their beliefs are a bunch of nonsensical gobbledygook, but their guns are pointed in the right direction. Most of QAnon’s favorite villains are pieces of shit. Even Tom Hanks. He seems like a nice enough guy, and yet, he made Forrest Gump, a crime against art just as egregious as his alleged pedophilia.

But there’s a problem. QAnon may have their guns out, but the fact their beliefs are based on lies means they are only capable of shooting blanks.

If the worst thing wrong with our elites was that they were Satanic pedophiles, we would actually be in a much better position than we are now. Ancient Rome was ruled by a bunch of pedophiles who worshipped Saturn. Hell, they even executed Jesus Christ, which is kind of Satanic. And yet ancient Rome still managed to last a hell of a lot longer than America is going to last on its present trajectory because they were ruled by people who, despite all their flaws, actually loved their country. Despite being Satanic pedophiles.

There were already reasons to feel that our elites (and Tom Hanks) deserve punishment. Our elites deserve it for selling out our country to globalists and foreign invaders, and Tom Hanks made Forrest Gump. Worshipping Satan and having sex with children is a footnote on the list of what is already publicly known about these people.

Still, I was content to take a “live and let live” attitude towards QAnon. Yeah, it’s retarded, but I didn’t see them doing much harm.

That changed after my first encounter with a QAnon devotee. I must confess that I found the experience unsettling.

Far be it from me to chastise anyone for entertaining unorthodox views. I’ve been involved in fringe politics for a while. I’ve been around and I’ve seen and heard a lot of crazy shit. As someone who writes about internet culture, I keep half an eye on several different online political scenes. I’m a big believer that if you are going to argue against something effectively, you first have to understand its appeal.

It’s tempting at times to say “people who believe X are either crazy or evil” or “they only profess their beliefs for the social rewards and/or to avoid social penalties.” That’s true a lot of the time. But I want to understand how a sincere and well-meaning person could be persuaded into things. Sometimes I learn things. Sometimes I find that they may have a good point or a legitimate grievance.

I’m on friendly terms with a few old school Marxists. I know liberals who believe things that are in direct opposition to everything I stand for and everything I hold dear who I would still describe as honorable people. I can think of a couple of people whose intelligence I respect who believe in Flat Earth theory but are otherwise perfectly sensible on every other issue. This isn’t even including all the crazy shit I hear from the mainstream media, which often puts the internet fringe types to shame in terms of sheer lunacy.

It takes a lot to rattle me. And yet I must confess that my encounter with this QAnon fellow left me rattled. The things this QAnon guy was saying were simply jaw-dropping, in the “how the fuck can you possibly believe that?” way. I dare say, Counter-Currents, I was thunderstruck.

This guy did say that he did not rule out the possibility that Q was a hoax, but he didn’t seem to struggle with any doubt. I suspect that is some kind of rhetorical tactic Q people use to lend themselves an air of objectivity.

I’ve heard several people in the Dissident Right, some of whom I freely admit are smarter (but less funny) than I am, talk about how difficult it is to argue with QAnon people. Top-notch debaters struggle to even put a dent in these people’s convictions. I now understand what they were talking about.

The QAnon crowd is motivated purely by faith. Flat Earthers? They don’t have faith that the world is flat. They sincerely believe that the evidence for the earth being flat is compelling, if not conclusive. But QAnon people’s base assumption is that this anonymous shitposter known as Q is not simply blowing smoke up their asses. They have faith that this fellow is being on the level with them. Everything else is built on that one underlying assumption.

There’s the old saying that “you can’t reason someone out of a position that they were not reasoned into.” QAnon types did not arrive at their beliefs by way of reason, and that’s why it is so hard talking to them.

OK, so they have stupid beliefs. I can tolerate that to a point. But then I read this article by David Cole about some MAGA types who came into town and made an annoyance of themselves.

On Jan. 3 they descended upon the Century City mall and a nearby grocery store in an “anti-mask” protest. They harassed shoppers, yelled at employees, got into fights, called everyone a “Nazi,” and basically made themselves a pain in the ass to ordinary folks who were just trying to buy food. No need to take my word for it; the Beverly Hills Courier’s Sam Braslow collected a dozen videos of the day’s events.

And then on the 10th, the protesters were back again at Century City, MAGA hats and all, demanding maskless entry into private businesses. The cops tried to explain the concept of private property, but the MAGAs countered that Lin Wood had assured them that the notion of private property rights is just satanic pedo disinformation. When the protesters were told that the mall could set its own codes of conduct, one MAGA, with that look of cocky pseudo-certainty that’s become the default “resting MAGA face,” replied, “Lin Wood says that’s not true,” while the lead MAGA added, “This is what happened in Nazi Germany.”

The other day, I saw someone tweet “It’s better for people to believe QAnon than CNN.” I guess. That’s technically true, and until recently, that was more or less my position on QAnon: “OK, it’s stupid, but as long as they have their guns pointed in the right direction, I’m not going to stress out about it. It’s an election year. We need solidarity. And the establishment hates them, so they must be doing at least something right.”

Take the storming of the Capitol. A large proportion of the stormers were QAnon people. Whether the occupation was strategically wise is debatable, but the fact that it was beautiful, glorious, and entirely morally justifiable is not. But when I looked at the QAnon people barging in, they seemed to me like a kid who climbed into a lion’s cage at the zoo. It’s a bold thing to do, but they didn’t do it because they are bold.

They just didn’t realize that it was dangerous.

» The Next Four Years