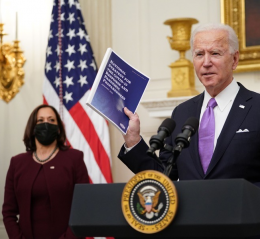 Election 2024? Why bother? Here is why. 2020 was the wildest election ever, a brazen turbulence of election rigging you would expect to see coming somewhere out of the third world. The aftermath was followed by a Big Brother propaganda campaign whipping up fury toward the imaginary legions of white supremacists. Now unfolding is a purge of the deposed Orange Man’s supporters. The impeachment proceedings for Chief Nazi Donald Trump are underway. Unlike Hitler the First, Hitler the Second didn’t commit suicide in his bunker/hot tub at Mar-a-Lago. AOC will likely lead the crew that will draw and quarter him live on CNN immediately upon his conviction in the Senate with Anderson Cooper providing the, uh, blow-by-blow commentary. Instead of a mock-severed head of President Trump like the one held up by comedian Kathy Griffin in 2017, the barmaid-Congresswoman from the Bronx will be hoisting high above her head the bloody real one. Sic semper tyrannis!

The impeachment is sheer revenge intended to humiliate and destroy the crude interloper of World Wide Wrestling fame who popped up and took the insiders off guard back in 2016 — on top of being very rude to them. “What an idiot!” they were howling throughout the election campaign as they outbid each other in estimates of Clinton’s coming landslide victory numbers. They mocked and ridiculed him mercilessly, until reality came crashing down on November 9th. There he was, bad mullet and all, suddenly perched at the head of the table in their Board Room tweeting away.

“Never is this going to happen again,” was the firm resolution of the ruling class mandarins. Now that, finally, he has been dispatched — impeachment redux. It didn’t work the first time when it was supposed to, but the second one still has a purpose. It sends a clear message to any irredeemable insane enough to think about it in the future. “Don’t! We will make you and your friends very sorry if you do.”

But now there is 2024 to gear up for, and to do what? First, how about those poor Republicans? I don’t mean the voters. I mean the Republican establishment big shots. These puffed-up, virtue-signaling kingpins, I think, should be practicing the soliloquy of Prince Hamlet: “To be or not to be, that is the question.” Yes, Mitch, Mitt, and Mike, that is the question, the only one you and your ilk should be pondering right this moment. Unfortunately, “not to be” is looking more and more like your only option. If there are any swords nearby, you might consider falling on them before Alejandro Mayorkas from Homeland Security stops by to confiscate them.

Well, how about those Democrats? The only question they should be pondering is: “Should we be popping the cork on a bottle of Dom Pérignon Rose Gold or Champagne Krug Clos d’Ambonnay? Tough decision for those folks gloating from the catbird seat. They’ve got the House, the Senate, and old, white, Joey Rob Biden in his regency post. With the assistance of a Ritalin pump, he’s been assigned to getting the Oval Office ship-shape for occupancy by the (sort of) black lady, who will go down as the Madam Defarge of our time. She’s impatiently waiting not just to be the glorious “first” of many things to be President. She’s positively giddy at the moment as she thinks about putting the screws to the remains of white privilege left over from the Trump era and getting Fort Leavenworth ready to welcome a fulsome harvest of white nationalists. And that will be in just her first one hundred days. There’s more for her to scratch off of her to-do list: four more Democrat Senators (from the 51st and 52nd states of DC and Puerto Rico); some more lefty judges on the Supreme Court; and tens of millions of new Democrats from the ranks of the “undocumented” impatiently awaiting amnesty and voter registration cards. The future of the Electoral College? North Dakota and Nebraska are soon to be the only “red states” left. In the words of Hillary Clinton, “What difference at this point does it make?” Indeed. Unemployed mechanics and pipeline workers? Who needs them?

Election 2024 for the Democrats? They are the party of Alfred E. Newman: “What, me worry?”

Well, not quite. The world is not yet their Nirvana, and the Democrats should be worried just a wee bit about the Republicans. Not because they pose any kind of threat to grab the reins of power from them. Just the opposite. Post-2020, they are not enough of a threat — which is a problem.

Why is that? Until Donald Trump came along four years ago, ignoring the dictum that Presidential politics is an invitation-only party, the Republicans were the loyal opposition for the Democrats. Check that. The Republicans were the controlled opposition. They were “Democrat Light”, so to speak, which is why from 1992 to 2012, they lost four of six Presidential elections. Still, no one in their company could believe how easily in 2016 The Donald rolled over Jeb, John, Marco, and the rest of the establishment stooges, one of whom was going to be taking one for the team as the sacrificial ox against Hillary. They came up with all kinds of reasons to explain it except the right one, which was: the Republican establishment cared more about being liked by Democrats and their MSM cheerleaders than their own party base. Trump came along in the 2016 primaries and hung “Democrat Light” lanyards around the necks of his Republican opponents as the Beltway pundits recoiled in horror and disbelief at this act of lese-majesty. “A choice, not an echo,” as Phyllis — may she rest in peace — put it so long ago. And now at least some of us happily remember “the rest of the story.”

Trump is gone now and the seventy-million or so Americans who voted for him are looking at the Republican establishment with eyes wide open. What they are seeing is something barren and flat out ugly: the Republican leaders aren’t loyal opposition; they’re not controlled opposition; they’re not any opposition. This is why the Democrats should worry. Because as much as they thrill to wielding power with no constraints, they know that their public relations image-making is best done by portraying themselves as virtuous defenders of the poor and oppressed against overwhelmingly powerful forces of bigotry and reaction. That was the dear departed Donald Trump, a reactionary bigot so powerful he was able to brutalize the country via Twitter until they axed his account. If Hitler the First had had Twitter, just imagine what he could have done. Voltaire is famous for saying: “If God did not exist, it would be necessary to invent him.” Allow me to propose a modernizing paraphrase: If real bigots did not exist, it would be necessary for the Democrats to invent them.

So, while Mitch and Mitt and Mike might still be deluded enough to imagine that they can rebuild and lead a serious opposition party, the Republican voters know what they are — career political hacks and life-long trimmers who’d sell out their mothers if the payoff were generous enough. Politicians with no constituents aren’t a believable controlled opposition to make look like they are not what they are — a single-party dictatorship. For a group of folks who endlessly bray about how wonderful “democracy” is, this cannot be a happy prospect for them. The Biden-Harris Presidency already bears the stench of illegitimacy.

The 2020 Presidential election has an upside for the seventy or so million Americans who cast their vote for Trump. It’s called “the truth.” And as the Good Book says: “Ye shall know the truth, and the truth. . .” Well, you know how the rest of it goes, the last word being “free.” Trump voters also understand now the truth of that maxim: “If voting was important, they wouldn’t let us do it.” Or, as Joe Stalin put it: “it’s not who gets the most votes that counts, it’s who gets to count them.” So, the Democrats will go on pretending that “democracy has prevailed,” but millions of people now can see that these emperors have no clothes. Pause and think for a moment of what a glimpse of wrinkly Joe, Nancy Hillary, and Maxine Waters, “uncarpeted,” would do to your appetite. At some point, if enough people start saying it out loud, things are going to get very interesting and unpredictable.