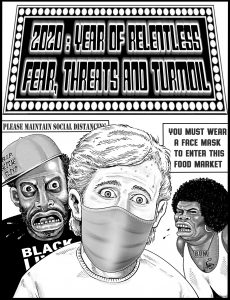 In the early 1970s, English comedian Peter Cook referred to vapid Hungarian actress Zsa Zsa Gabor as “the biggest non-event of the century.”

But that was the last century. This century’s biggest non-event, despite what they’ve been ceaselessly drilling into your brain with a trillion tiny digital jackhammers, is the myth of rampaging white racism.

Judging from their behavior, media mouthpieces so desperately wish to believe that whites are disproportionately self-interested and violently hostile toward others that writers and pundits will eagerly seize on any accusation of white racism toward nonwhites regardless of evidence, then use it as a giant Guilt Club with which to batter white Americans as if they were 200 million hapless albino baby seals.

As we close in on the final week of the Worst Year Yet, one must never forget that we were commanded to stay inside lest we murder people with COVID-19 aerosol droplets unless we were black looters and arsonists allegedly protesting “racial injustice.” Then, after the unmasked primates and their giant aerosol-droplet-snorting nostrils were allowed to burn down cities with impunity for the entire summer, whites were once again guilt-tripped about the fact that blacks wound up disproportionately affected by the virus as if, like everything, it was white people’s fault.

To clear-thinking people, the most stunning thing about the cataclysmic and irrevocably destructive hysteria that followed George Floyd’s death is the fact that there is ZERO evidence it had anything to do with “racism” beyond the fact that Floyd was black and Derek Chauvin is white.

But that’s all the “evidence” you need of “racism” these days. True or false, if a black person blames a white person for any suffering real or imagined, the entire editorial-industrial complex springs into action. The notion of “correlation does not imply causation” has been tossed into the dumpster in the service of a manic, fact-free, and mentally retarded quest for an unquantifiable concept known as “racial justice.”

Susan Moore was a fat, grey-haired, balding, sour-pussed, 52-year-old black female rhino with a medical degree who died last week due to complications from COVID-19. Not only was she obese — which makes the likelihood of dying from COVID-19 much higher — she also was a chronic sufferer of sarcoidosis, an inflammatory lung infection for which she’d been repeatedly hospitalized. Both her obesity and her lung condition were likely contributors to her death — but as the story is being spun, we are expected to believe this was a medical lynching.

It is in the freshly deceased person of Susan Moore where 2020’s two main atrocities — COVID-19 and Black Lives Matter — intersect.

Moore was diagnosed with COVID-19 in late November. While undergoing treatment at an Indiana hospital on December 4, she recorded and posted a video blaming a racist white male doctor for refusing to give her painkillers:

You have to show proof that you have something wrong with you in order for you to get the medicine. . . . I was crushed. He made me feel like I was a drug addict. And he knew I was a physician. I don’t take narcotics. I was hurt. . . . I put forth and I maintain if I was white, I wouldn’t have to go through that. . . . This is how black people get killed — when you send them home and they don’t know how to fight for themselves. . . . [He] didn’t want the black doctor to have no [sic] medicine. Nothing.

Moore was eventually discharged from George Lincoln Rockwell Hospital and admitted into another facility within 12 hours. She insisted that the people at the previous hospital “were trying to kill me” and praised the “compassionate” care at her new digs, where they apparently showered her in all the narcotics she requested.

Incidentally, the new hospital is where she died, but at least she did so in a racially compassionate environment where there were no Klansmen wearing medical trying to kill her. She’s dead, sure, but at least racism didn’t kill her.

Mind you, lack of painkillers didn’t kill her, but I guess that’s a minor footnote to the whole story.

If it goes against standard medical practice to require proof that a patient is legitimately experiencing pain before dispensing painkillers, I am unaware of any such rules. But what’s startling is that, EXACTLY like the George Floyd case, NONE of the media outlets even ASKED for proof that she was denied painkillers due to her race. In fact, none of them even bothered to ask the white male doctor in question if he denied her any painkillers at all. The media were also careful not to flat-out blame racism — except for CNN, whose article featured a subhead that said “Racism in health care is nothing new” — but each one of the following headlines allows you to fill in the blanks:

Clearly, this was a Racist Hate Murder. It’s not as if all service workers — even and perhaps especially blacks — will tell you that blacks are always the rudest, whiniest, most entitled, most insulting, and most unbearable customers.

Obviously, the only solution is to pass a law that forbids white people from interacting with blacks in any capacity, anywhere, and at any time. This is the only way to protect black people from the murderous sting of white racism.

If you dare to peek at any of the pundits’ year-end roundups, you’ll likely hear some iteration of the idea that 2020 was the year that America “finally” confronted racism. But when one examines the fact that major media outlets now routinely capitalize “black” while leaving “white” lower-case, as well as recent troubling news that older white people are being given lower priority than nonwhites for the COVID-19 vaccine in an effort to “level the playing field,” what rings truer is that this was the year that anti-whiteness became institutionalized. For decades, they’ve been hinting at it; now it’s official.

If you spend more than five minutes cruising news and academic websites, you’ll either encounter nonwhites gleefully spewing venom at the very idea of white people — or, even worse, self-loathing white people doing the same.

An Asian female writes about her “first date with a white man” and acts annoyed that her pale-skinned beau spoke fondly of Hong Kong. She claims to have felt “fetishized.” If he’d referred to Hong Kong as an overpopulated shithole filled with slant-eyed gooks, she would have felt racially attacked as well. Whether you compliment ’em or insult ’em, you’re a racist either way.

A Virginia judge rules that a black defendant who’s facing trial for allegedly assaulting a white police officer shouldn’t have to do so in a courtroom festooned with paintings of white judges.

The nearly all-white nerd squad at Boing Boing condemns the town of Murdock, MN, for allowing the Asatru Folk Assembly to set up a “whites only” church, even going so far as to cite some obscure tome by a certain Nashid Al-Amin as “proof” that even the Vikings were black. I didn’t even bother to check whether Boing Boing ever complained about all-Jewish synagogues or Nation of Islam meetings where white people are forbidden to attend.

Modern writers of all hues see nothing wrong with tossing scorn at “pale old white dudes” but wouldn’t in a million years make a peep about “disgustingly fat young black chicks.”

Gabe Schneider, a mulatto male with a surname which may signify either German or Jewish ancestry, whinges that “U.S. newsrooms are very white.” He fires off a litany of news-media luminaries whom he claims are “white.” Interestingly, the word “Jewish” is never mentioned. It’s the newsroom equivalent of complaining that Hollywood is “too white.”

Naturally, Hollywood is immersed in the task of rectifying its whiteness problem. Lucasfilm has vowed that all Star Wars-related projects will have either a woman or a Peep of Color as a main character. Marvel has likewise promised that the majority of their superheroes will have vaginas or excess melanin. Not to be outdone by Marvel, Lucasfilm is reportedly planning to introduce a “Trans Jedi” in an upcoming Star Wars production.

They will call you crazy not only for noticing the double standards, but for suspecting that they will not end in social harmony.

The only crazy people in this equation, though, are those who think that white people are the country’s main problem.