The Only Honest Person in the Room 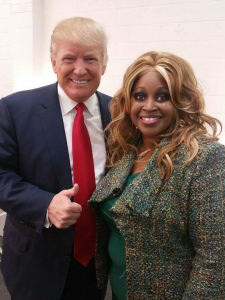 During the ongoing proceedings stemming from the fraudulent 2020 US presidential election, most of the actors involved have eschewed the topic of race. This is both good and bad. It’s good because if one side avers that race has been a decisive factor in this controversy, the other side would go ballistic and distract from the cases President Trump and his allies are bringing before the courts, the legislatures, and the American public. On the other hand, it’s bad, because ignoring the 500-pound gorilla in the room as it counts phony ballots during the most consequential election in American history is, well, bad.

One person, however, has bucked this trend: Linda Lee Tarver, former Election Integrity Liaison at the Michigan Secretary of State Office. She’s also on the advisory board of the Black Voices for Trump Coalition. Of all the witnesses I have seen so far during these hearings, this black woman with blonde hair is the only person who has repeatedly exposed the racial aspect of election fraud in plain language. On December 1st, she spoke before the Michigan Oversight Committee, and didn’t merely state euphemistically that fraud was happening in “urban areas.” She explicitly stated that it was black people committing the fraud, and only in black-run areas. She also made it clear that this is how it has always been in the three-and-a-half decades she has been involved in Michigan elections.

Much of her testimony digs into the nuts and bolts of running elections in Michigan. Certainly interesting for activists and politicians. The juicy bits, however, are as follows [emphasis mine].

Ballot stuffing, ballot curing, and complete fraud in the issuance, handling, and processing of ballots has not been addressed, and no election after 2020 should be considered fair unless we get this right this year. The complete hate, disdain, and apathy for Republican poll challengers is but one way of how elections are stolen in Michigan. Before COVID-19, and I’m talking to the Democrat in the house, and in every election in the last twenty-five years, Republican poll challengers were removed by the police, especially in Pontiac. MCL-168.733 says, “The election inspectors and the other election officials on duty shall protect a challenger in the discharge of his or her duties.” “Shall protect” is not an option. “Shall Protect.” It is never done in the urban areas. Never never never in urban areas in the thirty-four years I’ve been working for the state of Michigan, and certainly not the twenty-nine years I’ve been working at the Secretary of State. . .

But in these urban areas, they’re lazy, and they’re not taking this civic right very seriously, or their duties very seriously. . .

We know that there are over 500 precincts in Detroit, and many of the people who will come and get trained, some of them will not show up, but the ones that do that do show, they are not given sufficient training on how to legally perform the duties that they have. However, if they are told that the challenger is the enemy, this person standing behind you is the enemy, and they have not been told that the person behind you must be protected, you will not be able to address some of the oversight laziness, ignorance of the law, ignorance of the process, and lack of training. . .

When you have gone so many years, people do not want to be called racist, and if you’re going into urban areas, in particular Detroit, you’re hearing, “Why are you trying to disenfranchise the black vote? You are racist, racist, racist.

Several things stick out for me in Tarver’s testimony. First, there’s the basic bitch of Republicans complaining about how Democrats will call them racists whenever they challenge black corruption. Certainly, that’s true. But it is something we have heard many times before, and in any event, comes from a position of weakness. That is, it will never be persuasive to those who understand the power in calling their opponents the R-word.

Tarver also unnecessarily inserts herself into this narrative, almost as a mea culpa. She repeats the phrase “People who look like me” several times to underscore that it is black people and only black people that we’re talking about. Because her assessment of blacks is so bluntly negative, she seems to be beating herself up over the fraud that her own kind continually perpetrates. It’s as if she’s simultaneously proud and ashamed to be black. Add to this her prominent patriotic scarf and blonde hair, and we have an idea of who this Linda Lee Tarver is: a representative of legacy white America and an ally — if not an outright admirer — of white people.

If only all of ‘em were like this, am I right?

But what takes Tarver beyond the typical Michelle Malkin-Sean Hannity level of civnat discourse is the way she strongly hints not only at racial differences but the inevitability of these differences. All pie-in-the-sky hopes for black redemption remain absent in her testimony. Paternalistic concern is also nowhere to be found. Instead, she says that black voter fraud has always been a problem and needs to stop, and then goes no further. True enough, and I imagine it’s possible that she is not a race realist. But in her discourse, she drops the kind of truth bombs that no white person could get away with and not be called racist.

When you describe blacks en masse as being lazy, ignorant, apathetic, and habitual violators, you’re employing language that was used by segregationists to defend segregation. Today such language serves as a dog whistle for race realists who still wish to keep a shred of respectability. Not to denigrate everyone else who testified at that hearing, because there was a lot of great stuff — Melissa Carone, call me — but Linda Lee Tarver has done the world a tremendous service by expressing a fundamental yet forbidden truth in a highly public setting: black people as a group are simply not suited for democracy. They didn’t invent the concept, and whenever they try to implement it in large numbers, they cannot resist the temptation to pervert it.

An Indian witness, Hima Kolanigareddy, who was a poll challenger in Detroit on election night, corroborated much of what Tarver was saying.

I was standing behind the tabulator machines and I could tell right away that most of those people did not know what to do when a ballot gets jammed. . .

I could clearly tell most of these people didn’t have enough training and they were just monotonously doing their job.

She seconded not only the sheer incompetence of the blacks in Detroit, but also their criminal contempt for democracy.

Another thing that I noticed is that there were Democratic challengers there. I don’t even call them challengers. They were agitators. They were only there with one purpose. When GOP people or non-partisan people signed up, we were only trying to ensure that there was integrity, whereas when Democratic challengers signed up, their only purpose there was to intimidate the GOP people and get them out.

I didn’t have my GOP tag on, so automatically I was assumed to be a Democrat. And I had seen some women who had come to me and said, “Let’s get those M-Fs out.” And she was singing that song. . . she was targeting white male Republicans, accusing them of something like your mask slipped, you were not six feet away, so you need to go out, and you know, your phone was out. And they were really intimidating all these white people.

This revolting spectacle played out not just in Michigan, but in other states as well, most noticeably in Georgia. Earlier this month, video footage surfaced of what seemed like black poll workers in Atlanta pulling ballots out from underneath tables and counting them for hours after GOP poll watchers and the media had left the building. Already we nearly have an all-star starting five of black fraud: Ruby Freeman, her daughter Wandrea Moss, Ralph Jones, Sr., and Lawrence Sloan. Yes, whites also participate in fraud, and yes, Atlanta has quite a few blacks in it. But still, this is an extremely high correlation between blacks and election fraud, and it only supports the race realism of Linda Lee Tarver’s testimony.

There are two lessons here aside from the inability of blacks to run honest elections. One is that, despite the reality of COVID-19, it has clearly been used by the Democrats as an excuse to rig the election. Many witnesses have come forward explaining how GOP poll watchers were kicked out or not allowed to view the ballots because of this disease.

Secondly, no white politician should ever cater to blacks for any reason. President Trump, as he always liked to remind us, oversaw record lows of black unemployment. He also reached out to blacks with prison reform and his Platinum Plan. None of it worked. Despite nabbing a slightly greater share of their vote than in 2016, blacks still came out in force to vote against him in 2020, and they still ran the obscene rackets they call elections in the inner cities.

Linda Lee Tarver has stated that black voter fraud is a problem that must be solved. Fair enough. But wouldn’t establishing a system that completely disenfranchises blacks solve that problem? In such a world, we wouldn’t have the travesties that we’ve seen in places like Detroit, Atlanta, Philadelphia, and other black-run cities. It’s not like Tarver offers any alternative solutions. It’s not like any solution implemented in the past has done the trick either. She herself admits that blacks in her home state have shamelessly made a mockery out of democracy. They have “never never never” behaved differently (her words). She also claims that the right to vote is sacred. Okay, then the fundamental question becomes: how sacred? How sincere is her love for democracy? It’s sincere enough that she and two other black women have filed charges of corruption against the Michigan Secretary of State. Good on her for that. But would she sacrifice the right of blacks to vote in order to save the democracy that she loves?

Because with Donald Trump’s presidency now hanging by a thread thanks in large part to people who look like Linda Lee Tarver, it’s going to need saving.

« Five Minutes with the Average Voter