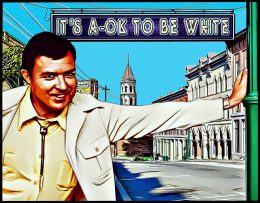 Terrible Tommy Metzger died the day after the election.

One night in the fall of 1989 I was a snot-nosed and cocksure wigger journalist who’d tooled the hundred miles or so south from my ratty apartment a half-block from Frederick’s of Hollywood to interview Metzger at his home in Fallbrook, CA.

At the time, Metzger, who made a living as a TV repairman, was the highest-profile face of white supremacy. . . or white nationalism. . . or white separatism. . . or at least unapologetic whiteness. . . in the country, soon to be eclipsed by David Duke, under whom Metzger had formerly served in the KKK. Duke didn’t start to snag national headlines on a large scale until his 1990 run for the US Senate in Louisiana.

It was also in 1990 that Morris Dees and his SPLC won a successful $12.5-million civil suit against Metzger, his son John, and Metzger’s organization White Aryan Resistance (WAR), blaming them for the beating death of an Ethiopian man named Mulugeta Seraw on the Portland streets by white-power skinheads in an incident that Metzger, to his death, insisted was a mere street fight gone bad rather than a deliberate racial attack on a colored fella who’d innocently been minding his own business walking around late at night as innocent colored fellas are wont to do.

The fact that Metzger did not know any of the killers did not impress the jury. Nor did the fact that he’d never told anyone to kill anyone. Nor was the fact that John and Tom Metzger were over 1,000 miles away from the incident when it happened. The sole piece of “evidence” that the SPLC used to bankrupt his organization was some vague message Metzger had left on his voicemail line about how he’d heard Portland skinheads were raising some hell up there and that he didn’t quite disapprove. Otherwise, there was absolutely no connection, direct or remote, between WAR and Seraw’s death.

That was 1990, and even back then the mere insinuation that someone was a violent racist Nazi was enough to prejudice a jury beyond all reason. Just like Vincent Bugliosi had convinced jurors in Charles Manson’s murder trial that Manson was guilty of murder simply because he had scary ideas, Mo Dees persuaded a group of sheltered Portlanders that Tom Metzger was responsible for murder even though he never even told anyone to kill anyone.

Although they never broke his spirit, Tom Metzger was one of the first to be targeted and bankrupted by the SPLC, which is why I see it as a minor tragedy that he was so forgotten and abandoned by so many of his ideological heirs, especially those who seek to aggressively distance themselves from whatever it was that they thought he did wrong and that they arrogantly assume they’re doing right these days.

Born in Indiana, which constantly vies with Nebraska as America’s bleakest state, Tom Metzger served in the US Army in the 1950s. He drifted toward anti-communism but by his own account felt alienated by the John Birch Society because they forbade the mere hint of Jew-naming. He achieved the rank of California’s Grand Dragon of the KKK until pivoting toward irreligious Third Positionism with a focus on reclaiming the streets that gradually earned him the unofficial role as paterfamilias of the American white-power skinhead movement.

In 1980, Metzger gained media prominence first by launching a successful campaign for the Democratic nomination for Congress in a district of Southern California despite being a proud former Klansman, a political coup that raised the ire of a young Maxine Waters.

The next time someone tries to tell you that we live in a “white supremacist” country, tell them that Tom Metzger languished in poverty and obscurity for the last 30 years of his life, while Maxine Waters lives in a million-dollar mansion and is still in Congress.

But even back in the early 1980s, Tom Metzger was desperately trying to spread the message that Republicans and Democrats were merely two arms on the same monster — and the message STILL hasn’t gotten across.

The Metzgers’ most famous moment in the spotlight was in 1988, a year before I interviewed Tom, on Geraldo when a group of skinheads cleared the stage with an explosion of violence the moment black activist Roy Innis tried choking Tom’s son John. Geraldo wound up with a broken nose.

Good optics or bad optics, those were certainly some powerful optics. I can’t recall any time since where a group of white people defended a white person against violence with such a breathtaking display of retaliatory violence. Instead, I’ve heard “Dissident Rightists” squabble among one another for 30 years about how people such as Metzger fucked up “the movement,” because under the new guidance, America is, um, in much better shape than it was in the 1980s, even though many of the prophesies Metzger made back then that seemed dystopian and schizophrenic have been fulfilled.

But despite his organizational skills and the fact that he seemed to have a thousand eager wolves on a leash at a moment’s notice, Metzger’s chief talent was as an unapologetic spokesman who could disarm people with a mien as gentle as a kitten’s. He was the absolute first guest on a short-lived late-night Whoopi Goldberg talk show in 1992, and look at how he has her eating out of his hand by the end of the show.

JDL thug Irv Rubin, incensed that Goldberg had given Metzger a platform, demanded equal time, which she granted him. This was shortly after 1992’s LA riots, and whereas Metzger had utterly charmed her, Whoopi was shooting daggers at the graceless and charmless Rubin after he spat out things such as “Jews don’t riot. What are we going to loot — libraries?”

After my interview with Metzger appeared in the Los Angeles Reader in late 1989 with the title “He Always Does the White Thing,” Rubin called me at the Reader demanding equal time. Unlike Whoopi, I was not so accommodating.

At one point during the interview I asked to use the Metzgers’ bathroom, and I remember being startled to see a copy of People magazine sitting there near the commode. A child of relentless media brainwashing just like any other American child, it didn’t occur to me that “Nazis” did anything but lynch blacks and throw darts at pictures of Jews. It seemed so disconcerting that one or more members of Tom’s family might want to read about the latest Kevin Costner movie or how the various members of Bon Jovi were handling rehab.

Like it or not, seeing People magazine there forced me to concede that, yes, the Metzger family was comprised of actual human beings who laughed, cried, and probably liked ice cream.

This is why they don’t allow you near people like the Metzgers anymore.

But it was Metzger’s response to a pointed question which I had considered a real “gotcha” that entirely flipped my egali-tarded worldview on its head. It was both the content of his response and the unconcerned manner in which he delivered it that changed the whole way I looked at the world. This was 31 years ago — more than half my life ago — and it was the last major ideological shift I’ve had; the first two involved tossing the script on Santa Claus and Jesus.

“You’re not big on equality, are you?” I arrogantly asked Metzger as if I’d cornered a rat.

“No,” he shrugged, “and neither is anyone in power. So when they say, ‘All men are created equal,’ I laugh, because no one in power believes that.”

I don’t think I uttered a response. Instead, I likely uttered a soft internal “Oh” and realized that he was right. No one in power feels equal to us — they obviously feel superior.

Metzger’s comment was not the only thing that shifted my perspective. I had started to gradually become disenchanted with Leftism because I am saddled with this unfortunate ability to notice patterns. Innate inequality has a way of inconveniently poking out its head no matter how violently they try to suppress it.

So do the egregious double standards. It was around this time, while flipping through the WAR newspaper, that I noticed Metzger was peddling VHS tapes of British white-power punk band Skrewdriver. This was back when I happened to realize that while major music corporations were pushing violent black racial radicalism in the form of bands such as Public Enemy, there was nothing remotely equivalent for white kids. NWA would start selling millions — mostly to disaffected white suburban teens — while Skrewdriver wallowed in complete obscurity. The powers that be were propping up entities such as Maxine Waters and Niggas Wit’ Attitudez while they squashed Skrewdriver and Tom Metzger like so many White Aryan cockroaches.

With rare relish, Tom Metzger played the role of the evil grinning white-power gnome throughout the 1980s. The powers that be stepped in and destroyed him in the early 1990s while allowing the relatively inarticulate shitheads from NWA to become near-billionaires. It’s clear who the true American radical was back then. Hint: It wasn’t Dr. Dre or Ice Cube.

One needn’t become a violent skinhead to see the truth in some of what Metzger was saying. With an impenitent smirk, he said many things that are simply common sense once you extricate them from the theatrics and how outrageous they seem in the broader cultural context — things such as “Fifty-five million people died in World War II, and all people wanna do is cry about the Jews; what about all the rest of the people that died in World War II?”

Tom Metzger was one of the few to realize how fruitless it is to worry about optics when the world is burning around you. He also had the rare ability to demolish entire worldviews with a simple shrug and a short, perfectly sensible answer to an emotionally loaded question.

It’s clear why they had to silence him.