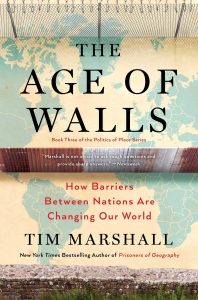 Tim Marshall is a British journalist who had a long career with Sky News. In response to Trump’s win in 2016, he wrote a book about walls around the world and how these walls are affecting geopolitics.

The border wall between the United States and Mexico started to get built by the Clinton administration. The border wall turned out to be considerably effective in some cases, but it moved smuggling and illegal crossings to different areas.

To put the situation in my own words, Trump’s wall is the physical manifestation of whites rejecting the racial settlement of the 1960s. In some ways, the wall is a misallocation of priorities. The real problems are the 1964 Civil Rights Act and legal immigration, especially from Asia.

Part of the problem, too, is Bangladesh’s geography. It is a low-lying floodplain, so the place is a mess of high water. Rising sea levels threaten to consume parts of the country. This is where IQ and culture matters. Bangladeshi’s national IQ is 82 and the nation is saddled with a mind-closing religion. Meanwhile, the Netherlands, which has the same geographic and hydrographic issues, has reclaimed land from the sea since time immemorial and is highly prosperous.

India is also building a fence on its border with Myanmar. Pakistan started to erect a fence between itself and Afghanistan in 2017. Since the Northwest Frontier has always been problematic, long walls are likely to be the future, not the past. Even Iran is building walls along its border with Pakistan.

« Trump, for Lack of Something Better