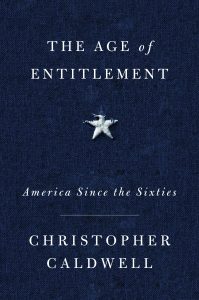 In 2015, Kim Davis, a frumpy county clerk from a Nowheresville in Appalachia, refused to issue gay marriage licenses and was briefly jailed as a result. Additionally, Davis and her fellow office workers were subjected to the cruelest of internet jokes. Ironically, in the months before Davis was bullied on a nationwide scale, her very detractors had launched an anti-bullying campaign that had support from the highest levels. 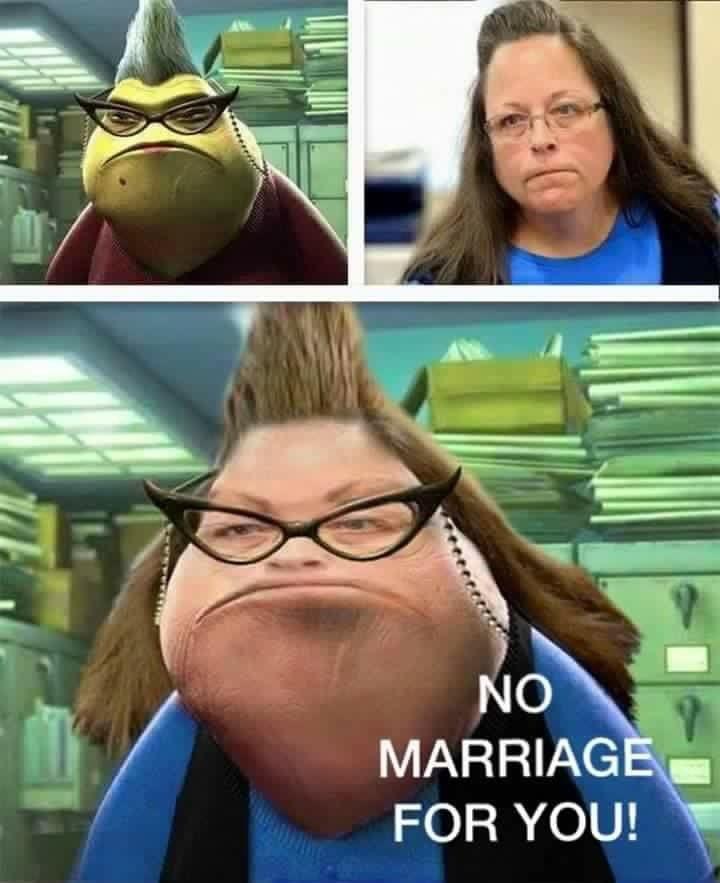 Kim Davis was cruelly treated for her lonely stand.

After reading Christopher Caldwell’s Age of Entitlement: America Since the Sixties, I thought back to the Kim Davis Affair and reinterpreted it. At the time of the controversy, I felt it was a permanent end to conservatism. After reading the book under review, I realized that the gay identity movement had won a victory that they couldn’t keep. After all, Kim Davis was not a criminal, and she hails from a culture that mounted their guard on the walls of Londonderry while on half-rations and then went to civilize the North American wilderness. Davis also bore and raised four children. Her adversaries cannot have children, and they made sterile sexual behavior their primary identity. Furthermore, to accept transgenderism, one must also accept an obvious lie.

For now, however, gay identity won, and won big — and they’ve been winning for decades:

Republicans. . . saw political correctness as little more than a series of jokes. . . [but] on their own chances of prevailing on matters of law had fallen to nil. Once social issues could be cast as battles over civil rights, Republicans would lose 100 percent of the time. The agenda of “diversity” advanced when its proponents won elections and when they lost them. [1]

Caldwell’s book has three different thrusts. The first thrust can be summed up as “white people problems.” It details recent issues with capitalism, especially the shenanigans of Amazon and other internet-based companies. Since this review is for a racially-aware website, I won’t expand upon these ideas. Suffice to say, the new captains of industry have the same goods and bads as the captains of industry of old, and they’ll need to be managed somehow for the good of society. The second is the impact of the Baby Boom Generation on politics. The final idea — highly radical — is that the 1964 Civil Rights Act is, in effect, a second constitution governing American society.

The Greatest Generation Wasn’t That Great, & the Baby Boomers Weren’t That Bad 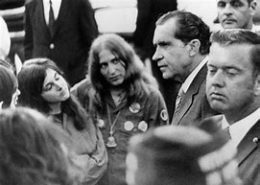 Caldwell argues that the generation gaps weren’t conservative elders vs. liberal youngsters. Instead, much of the counter culture was the rejection of the liberal technocratic order built by FDR and others, to include a rejection of “civil rights.”

The “Greatest Generation” is usually defined as the cohort of people born between 1901 and 1924. However, a better case can be made that America’s true greatest generation are those born between 1860 and 1882. In their youth, the latter generation won their war (with Spain) in a matter of months, sent an expeditionary force to Peking, China and won, and then won an insurgency in the Philippines within two years. As adults, they enacted immigration restrictions and carried out pro-white policies in all parts of the USA. As elders, they directed strategy for World War II. Even most state flags were designed by the women of this generation. 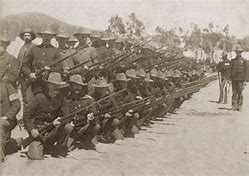 Victorious in war, racially aware, industrious, spiritual; the generation born in the two decades after the US Civil War were the greatest American generation.

The World War II generation returned home, created suburbs with family-sized barracks, and built stifling schools that looked exactly alike. It was this generation’s complacency that allowed America to deindustrialize. On their watch, American-made cars became the shoddy, undrivable monstrosities of the 1970s. As older adults, they were baffled by the challenges of the Vietnam War. Even worse, it was they, not the Boomers, who enacted the 1964 Civil Rights Act. Caldwell writes:

By the time the oldest Boomers got to college in 1963, there were 16,000 troops in Vietnam and the March on Washington had already happened. When Martin Luther King and Robert Kennedy were assassinated in the spring of 1968, no Baby Boomer had ever voted in a presidential election. At the time of the countercultural music festival at Woodstock [in] 1969, the youngest Baby Boomers were still too young for kindergarten. [2]

The definitive history of the “civil rights” movement has yet to be written, but I agree that the Boomers didn’t enact “civil rights” or the 1965 Immigration Act. Indeed, the impulses that created these twin disasters were decades-long in the making. Jewish activists in the NAACP were shaping the Judicial Branch as early as the Taft administration when they helped block the appointment of Judge William C. Hook for the Supreme Court. Segregation laws were successfully challenged throughout the 1930s and beyond. The NAACP’s strategy of advances by means of the Judicial Branch was effective. They used a trick called barratry, where litigants created stylized cases in districts with sympathetic judges. Rosa Parks was a carefully selected activist creating a scene, not a tired seamstress. Other non-white and leftist activists have used the same trick. Gay “rights” advanced through barratry.

Bearing that in mind, Caldwell argues that the counter-culture movement of the late 1960s was a conservative reaction to the massive failures of early 1960s technocratic leftism. It was also a reaction against “civil rights.” Caldwell shows that the majority of white Americans were hostile to the 1964 Civil Rights Act even after it was freshly signed, with many wanting the law not enforced. The act was passed with the idea that it was limited to African-Americans and would be temporary. Boomers that supported “civil rights” were bureaucratic normalizers of it, not revolutionaries themselves.

Caldwell argues that Ronald Reagan was elected by Boomers to dismantle “civil rights.” Instead, Reagan created a system that paid for the massive economic costs of “civil rights” through debt. Later presidents doubled down on this policy until the 2008 Recession — an economic disaster that was caused by lending money to non-whites. Reagan and his successors also expanded “civil rights” so that recently-arrived, wealthy third-world immigrants had more advantages than native-born whites.

“Diversity” is the logical conclusion of the 1964 Civil Rights Act, which is a second constitution operating parallel to the US Constitution. What is implied by the 1964 Civil Rights Act (such as bussing) is treated by the courts the same way as what is implied by the US Constitution. Supporters of the law are also willing to use raw power to enforce the act, rather than persuasion — and they don’t care about the costs. Caldwell writes:

Barack Obama was the first president to understand civil rights law this way, as a de facto constitution by which the de jure constitution could be bypassed, and to lead the country on that new constitutional basis. His second inaugural address in 2012, an explicitly Constitution-focused address in which he repeated “We the People . . . ,” honored “Seneca Falls and Selma and Stonewall” (i.e., women’s rights, civil rights, and gay rights) as the great constitutional achievements of modern times, and extra-parliamentary protest and Supreme Court jurisprudence as the high roads that led there. [3]

Free speech, freedom of religion, the right to keep and bear arms — all of the rights white Americans have held sacred since the Magna Carta — are under threat from the 1964 Civil Rights Act. Additionally, the ideas of the 1964 Civil Rights Act are exportable. As a result, political parties in Ireland that trace their roots to the ethnonationalist struggle of 1916 are importing third-world migrants to replace their population.

Caldwell makes a case that American whites stay silent, duck and weave, and/or dissemble when dealing with the 1964 Civil Rights Act’s implications. Most ominously:

This polarization around civil rights resembled the polarization around slavery that emerged into public view only with the vote on the Wilmot Proviso in 1846. Similar questions of affiliation and identity were emerging. Republicans held the allegiance of the vast majority of white people. Their party united almost the entirety of both the pro-New Deal and the anti-New Deal coalitions of fifty years before. The Democrats were the party of those whose concerns had never been in the forefront of American political life until the 1960s — blacks, gays, and women (as women) — and of tens of millions of immigrants and their offspring, who back then had not been in the country at all. The culture of civil rights was what American politics had come to be about, even if Americans had trouble talking about it. [4]

Age of Entitlement, written by the editor of the now-defunct Weekly Standard Christopher Caldwell, is a watershed publication. It is the first mainstream non-fiction book I’ve ever read that validates the ideas of the white nationalist right. Caldwell quotes Sam Francis and Peter Brimelow. He doesn’t insist that the Reverend Doctor Martin Luther King Jr.’s vision was subverted by “progressives.” Instead, he argues that “civil rights” was rotten from the get-go.

Caldwell shows that ending “civil rights” has been on the collective white mind for decades — and it can now be on their lips, too.