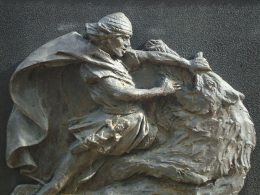 On my way to a heavy metal concert last year, I had a layover at the Riga Airport. While having a beer and a shot of Black Balsam at the airport bar, I was talking online to a Latvian woman that also liked heavy metal. I told her that I had always wanted to visit Riga and was fascinated by Latvia’s national epic poem, Lāčplēsis. After the concert, I ended up relocating to Riga for a few months. During my evening walks through Riga’s Old Town to the Daugava River, I began to realize the important role that Lāčplēsis had in shaping Latvian identity, culture, and independence. In many ways, the trials and tribulations endured by the hero of this poem resemble the struggles that white people around the world now face in standing up for our own sovereignty and survival.

The Daugava River flows through Russia, Belarus, and Latvia. The area known today as Riga began to develop along the Daugava as a center of Viking trade during the Middle Ages. By this time, the area was already settled by the Livonians, a Finnic tribe. In 1199, Prince-Archbishop Hartwig II of Bremen offered a bishop title to his nephew Albert if he could conquer and convert the remaining pagan tribes in the area to Christianity. Starting in 1200, Albert led a crusade into the Baltics. With the help of various merchants, Albert founded the city of Riga in 1201. By 1202, Albert established the Livonian Brothers of the Sword, a collection of German mercenaries who considered themselves “warrior monks.” In 1204, Pope Innocent III encouraged Albert and his mercenaries to continue fighting the remaining pagan tribes along the Daugava while securing German control over trade commerce. The Livonians were defeated at Turaida in 1206 and by the time Albert died in 1229, German control around the Daugava was firmly established.

Andrejs Pumpurs was born in 1841 and grew up on both banks of the Daugava. Although selected for an upper-class German education by the church, Pumpurs was unable to complete his education due to his family’s poverty. By working as a craftsman in the rural areas along the river, Pumpurs was exposed to Latvian mythology and folklore. He started compiling these myths and legends into one complete narrative in poetic verse around 1872. He traveled to Moscow in 1876 and eventually volunteered to fight with the Russians and Serbians against the Turks in the Serbian-Turkish Wars. His experience in the war strongly influenced his passion for nationalism. In 1882, he returned to Riga to continue working on his epic poem. That poem eventually became Lāčplēsis and was published in 1888.

The poem follows the adventures of Lāčplēsis (bear slayer in Latvian), who gains notoriety after killing a bear with his own hands as a boy. After discovering a plot by the villainous Kangars to have foreign crusaders replace the old gods with Christianity, Lāčplēsis is thrown into a whirlpool in the Daugava. He is then rescued by the goddess Staburadze and taken to her castle where he meets the young maiden Laimdota and Koknesis (wood-bearer). Lāčplēsis falls in love with Laimdota and befriends Koknesis. After the three of them travel to Estonia to meet Kalapuisis (also the main character from the Estonian epic poem Kalevipoeg), they decide to unite to fight Kangars and the crusaders.

Laimdota and Koknesis are eventually kidnapped and imprisoned in Germany. On the way to rescue them, Lāčplēsis gets lost in the North Sea and fights various monsters. Lāčplēsis eventually finds his friends and proposes to Laimdota. They return home to get married but postpone the wedding to fight off Bishop Albert and the crusaders. While the heroes are fighting the crusaders, Kangars learns that Lāčplēsis’ mother was a she-bear and that the source of Lāčplēsis’ strength resides in his bear ears. After defeating the crusaders, Lāčplēsis is tricked into competing in a tournament against the Black Knight, who knows about Lāčplēsis’ weakness. During the battle, the knight cuts off Lāčplēsis’ ears. Being weakened but wanting to protect his people, Lāčplēsis throws himself at the Black Knight as they both fall off a cliff into the Daugava river, never to be seen or heard from again.

I decided to read Lāčplēsis again during my time in Riga. The Latvian woman worked late shifts during the week, so I often read a few pages each afternoon and then had dinner at the local Lido restaurant before meeting her in the Old Town area. Lido is a traditional Latvian restaurant chain that serves traditional Latvian food cafeteria-style. One thing that makes Latvian cuisine unique is the large variety of cold soups, which despite a few attempts, I could never acquire a taste for. Nevertheless, I took advantage of the wide selection of Latvian dishes at Lido and my evening meals consisted of gray peas with bacon, karbonade, speķrauši, and biezpienmaize (Latvian cheesecake).

After dinner, I would walk through Esplanade Park and pass a statue of Jānis Pliekšāns, better known under his pseudonym as Rainis. Rainis was a Latvian poet, playwright, and activist whose poems and plays had a profound influence on the Latvian language and Latvian nationalism. Rainis wrote most of his popular works in exile, including the play Daugava and the poem Sveika, brīvā Latvija (Hello, Free Latvia). Many of his poems became popular again during Latvia’s Third Awakening, a movement between 1987 and 1991 that led to the eventual formation of modern-day Latvia.

After Esplanade Park, I would walk past Latvia’s Freedom Monument. Built in 1935, the Freedom Monument is a memorial honoring the soldiers killed during the Latvian War of Independence between 1918 and 1920. The front of the monument reads Tēvzemei un Brīvībai (for fatherland and freedom) and at the top of the pillar is a woman holding three stars, each representing the constitutional districts of Latvia: Vidzeme, Latgale, and Courland. Around the base of the monument are various sculptures that depict Latvian history and culture. One of the sculptures is of Lāčplēsis.

There are various ceremonies and national holidays that take place at the Freedom Monument. Lāčplēsis Day is celebrated on November 11th and commemorates all the soldiers that fought for Latvian independence. November 18th is the annual Proclamation Day of the Republic of Latvia and marks the Proclamation of Independence of Latvia in 1918. The National Alliance party has been organizing a torchlight rally for this holiday that attracts thousands of attendants who march through the city center and end up at the Freedom Monument.

Past the Freedom Market is Riga’s Old Town area, which has become a UNESCO World Heritage Site. Amidst old churches and cathedrals are tourist restaurants and bars. Near the end of the main boulevard is a market square that has the famous House of the Blackheads. The House of the Blackheads was built in the 14th century by the Brotherhood of Blackheads, a guild for merchants, shipowners, and foreigners in Riga. This organization traces its roots back to a group of foreign merchants that tried to protect Reval (modern-day Tallinn, Estonia) from crusaders. The brotherhood expanded into Riga in the early 15th century and did their part to defend Riga during such conflicts as the Livonian War (1558-1583) and the Great Northern War (1700-1721).

Next to the House of the Blackheads is a statue of Saint Roland, the unofficial patron saint of Riga. Behind the Roland statue is another statue of a Christmas tree, which commemorates one of the earliest recorded Christmas trees being placed in this square in 1510. During my walks to this market square, there was often a young woman who played Metallica songs on her cello. While waiting in the market square each evening for the Latvian woman, I greatly appreciated all the extra time I got to enjoy the statues and medieval buildings in the market square while listening to Metallica tunes.

After meeting in the market, we would walk along the Daugava to her apartment. We spent most of our evenings listening to heavy metal while drinking Black Balsam, a traditional Latvian liqueur that has various ingredients known to treat colds and digestive problems. We also drank various beers from the Lāčplēsis Brewing Company, who name each of their beer styles after characters from the poem. We also talked about possible events for the future. We were planning on attending the Kilkim Žaibu festival in Lithuania. We were both excited to participate in the torchlight rally in November. We were even planning on eating all the unique seasonal food at the Riga Christmas markets in late December. Most importantly, we were planning to spend time together. Yet just like the current of the Daugava River, life sometimes takes you in a direction that you do not always plan or prepare for.

Lāčplēsis is symbolic of Latvia’s struggle for independence. Lāčplēsis was a brave hero who went on adventures, rescued his friends, and protected his homeland from invaders. Despite his weakness, he had the courage to risk everything to defeat his enemy and protect his people. The Latvian people have survived through various wars, invasions, and foreign rulers. Through it all, they maintained their language, culture, and identity. Artists like Pumpurs and Rainis even put their own safety on the line to write about Latvian folklore and identity. These writings inspired future nationalist movements that finally obtained Latvian sovereignty and independence.

Unfortunately, the Livonian language, culture, and people have not fared so well over time. The way things are currently going, our future does not look any better. Non-whites are attacking, raping, and murdering white people on an hourly basis. Our governments are allowing non-whites to invade our countries for the purpose of outvoting us, outbreeding us, and ultimately replacing us. We in the Dissident Right must not let our people become extinct.

We must continue mocking every anti-white government that promotes our replacement and extinction. Let us subvert every anti-white institution with our own pro-white propaganda. We can create our own art and culture that portrays our ancestors as heroes, our histories as adventures, and our current struggles as revolutions against oppression. The work we do now will inspire the movements of tomorrow. While Lāčplēsis may have thrown himself in the Daugava to defeat the Black Knight, his bravery and courage run like a river in our veins. And we have the heroic task of securing the existence of our people and a future for white children.

I had another layover at Riga airport this year. Over a shot of Black Balsam, I thought about the Latvian woman and all the great times we had. I wished that things had worked out between us, but perhaps it was not meant to be. Regardless, I hope that one day I can return to Latvia and participate in all the events I had planned to attend. Whether with friends, a girlfriend, or alone, I look forward to walking through the Old Town to the Daugava again. I look forward to celebrating every Latvian Proclamation Day with torchlight rallies. I look forward to walking the path of a wanderer, dissident, and white nationalist.