Along the Castle Walls 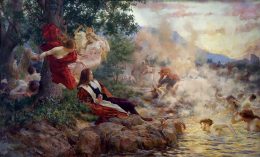 While I was living in Eastern Europe, I traveled to Dubrovnik, Croatia to go on some Game of Thrones walking tours. During the tours, I kept seeing monuments of Marin Držić and Ivan Gundulić, two of Croatia’s most influential writers. After the tours, I ended up chatting with an Australian tourist who slowly revealed his concerns about non-white immigration. In many ways, the conversations I had with him along the castle walls of Dubrovnik mirrored the themes discussed in the works of Držić and Gundulić. These themes of hope, endurance, and laughter can be beneficial to many of us in the Dissident Right when we find ourselves struggling through difficult times.

For most of its early history, Dubrovnik was also known as Ragusa. The city was founded around the 7th century and was under the protection of the Byzantine Empire up until the 12th century. During this period, Dubrovnik became an oligarchic republic and a successful trading port. After the decline of the Byzantine Empire, the city was controlled by the Republic of Venice throughout the 13th century. By the end of the 14th century, Dubrovnik was ruling itself as an autonomous state (although it did pay annual tributes to the Ottoman Empire up until the 18th century).

While Dubrovnik was used as the setting of King’s Landing, Dubrovnik’s medieval history rivals the political intrigue of Game of Thrones. The city used diplomacy and espionage to maintain its sovereignty between Venice and the Ottoman Empire. Dubrovnik was also ruled by an elite aristocracy that controlled both city councils and maintained a strict social class system. The upper class was of Italian background and spoke Venetian and other Italian dialects. The lower classes were Slavic and spoke Croatian. Over time, the lower classes grew, and the Croatian language became more widely spoken and used in literature. During the walking tour, we passed by a statue and monument dedicated to Marin Držić, one of the most influential writers in Croatian literature.

Držić was born in Dubrovnik in 1508 to a wealthy family, and despite his rebellious nature, he was trained and ordained as a priest. After spending time in Siena and Vienna, he eventually lost interest in religious pursuits and returned to Dubrovnik in 1543. It was around this time that Držić’s life took a different path. He started hanging out with outlaws and took odd jobs as an interpreter, scribe, and musician. After some adventures in Constantinople and Venice, Držić got involved in politics.

Držić thought that Dubrovnik was ruled by an elite aristocracy and that the city was headed towards tyranny. Držić wrote several letters to the Medici family in Florence to convince them to help overthrow the ruling elite in Dubrovnik. Unfortunately, none of them responded to his letters. Since his requests remained unanswered, Držić turned to writing poems, short stories, and plays to mock and criticize the ruling elite. His plays became popular, but he noticed that different age groups responded differently to his works. These differences led him to write Dundo Maroje.

Dundo Maroje (Uncle Maroje) is a comedy that deals with the differences between the older and younger generations in Medieval Rome with characters from Dubrovnik. While the plot follows various characters and their interconnected side stories, the main characters are Uncle Maroje, his son Maro, Laura the courtesan, and the servants Pomet and Popiva. From star-crossed lovers to senile tyrants, Dundo Maroje reveals many truths about life and human nature through laughter and humor. It is considered a milestone in Croatian literature and it has become more popular over the last few years thanks to some recent translations.

The second walking tour started in Dubrovnik’s Old Town and continued towards the Lovrijenac Fortress where various courtyard scenes in King’s Landing were filmed. On the way to the fortress, the tour guide pointed out a monument and a statue of Ivan Gundulić. Gundulić was born in 1589 to a wealthy noble family. After receiving an extensive education, Gundulić held various positions in local government. In between these positions, Gundulić started writing poems and plays that became popular in Dubrovnik. After publishing several religious poems, Gundulić wrote and published Tears of the Prodigal Son in 1622. In this epic poem, Gundulić retells the biblical Parable of the Prodigal Son through three parts: sin, repentance, and redemption. While this poem has become one of the great epics of Croatian literature, one of Gundulić’s most important works was incomplete and released only after his death.

In Osman, Gundulić identifies the differences and inevitable conflicts between Christian Europeans and Muslim Turks. The story follows the Ottoman sultan Osman II and the envoys he sends to Poland after the Ottoman defeat at the Battle of Khotyn in 1621. Gundulić describes the travels of these envoys and how the Slavs of Eastern Europe suffered under Ottoman Rule. At the same time, the author shows the enduring spirit of Europeans and their ability to unite and defeat foreign invaders.

Gundulić never completed the ending of Osman and some of the chapters were lost over time. Nevertheless, Osman was first published in 1826 with the missing chapters being replaced by poems written by Peter Crijević, a direct descendant of Gundulić. Later editions after 1844 added a conclusion to the story by Ivan Mažuranić, a Croatian linguist, poet, and nationalist. A large monument and statue dedicated to Gundulić was unveiled in Dubrovnik’s main square in 1893. It was at this monument that the second tour ended.

After the tour, I went to the Dundo Maroje Restaurant. I saw one of the guys from the tour group sitting by himself. Since the restaurant was somewhat crowded, I invited him to sit at my table. After introducing ourselves, we each had a shot of Maraschino (a Croatian liqueur), followed by a large glass of Karlovačko beer. I then ordered a local sampler dish with fried calamari, ćevapčići, and polenta. During the meal, we talked about our favorite characters and story arcs from Game of Thrones. Since the area was getting congested with tourists, we decided to pay the extra fee to walk on top of the castle walls and enjoy the scenery away from the crowds.

As we walked along the city walls, we got an excellent view of the harbor that was the setting for Blackwater Bay in Game of Thrones. During our walk, we ended up talking about women, video games, and our past adventures. Although he was living and working in Australia, his family was from Malta and he had just visited his parents there. I asked him if he enjoyed his recent visit to Malta. He hesitated, and after looking around, he explained that there had been growing problems with migrants over the last few years and that the situation was getting worse. As expected, he immediately tried to assure me that he was not “racist.”

I smiled and held back my laughter. I told him that only white people were called “racist.” Only white people are shamed for taking pride in their history, heritage, and ancestry. Only white countries are expected to be diverse, tolerant, and multi-cultural. He was very relieved when I said these things. We continued our walk and he told me about his dreams of moving to Malta to open a medieval-themed bar and to be closer to his parents. Yet he worried about his parents because the African migrants had been committing violent crimes throughout the island. He did not understand how or why so many of them had arrived in just a few years. With the increase of migrants and crime, he was losing hope in the prospects of opening a bar in Malta.

I thought about the Australian tourist this week when I heard about the tragic fate of Jake Gardner. Gardner was a decorated US veteran who owned a bar in Omaha, Nebraska. During the George Floyd riots, Gardner was protecting his property from BLM and Antifa mobs. After being attacked by a violent felon, Gardner defended himself by shooting his attacker. The attacker died and after being questioned by police, Gardner was released without charges. Unfortunately, the district attorney hired a black prosecutor to charge Gardner with various felonies. Gardner quickly lost his bar and was receiving numerous death threats. After public slander and false accusations, Gardner decided to end his own life.

Gardner was a military hero who served a country that betrayed him. The US government failed to stop the riots, so Gardner had to defend his own property. The police failed to protect Gardner, so he had to protect himself. The judicial system accused him of crimes he did not commit, and he would never have received a fair trial. Stuck between a rock and a hard place, Gardner made a decision that none of us should ever have to make. Regardless of his decision, he will always be a hero to me.

When I think of all the current challenges that we face such as violent crime, demographic displacement, and anti-white propaganda, I sometimes wonder if there is any hope for the white race. During these times, I look back at my life and find inspiration in the places I have traveled, the people I have met, and the books I have read.  Gundulić wrote about redemption and how the European spirit can overcome the greatest of challenges. Držić reminds us that sometimes laughter is the best medicine and weapon. The Australian tourist made me realize that ordinary people are becoming aware of these issues and are looking to us for support and answers. Most importantly, heroes like Gardner remind me why we should always reach out and offer help to people within the Dissident Right who fall on hard times. Whether you are a bar owner in Omaha, a tourist from Australia, or a wanderer and dissident in Dubrovnik, we all have a part to play in securing the existence for our people and a future for white children. Yet even the best of us need a little help and support.

After dinner, I said goodbye to the Australian tourist and wished him the best of luck in all his endeavors. Instead of heading back to the hotel, I decided to take one more walk along the castle walls. For almost a decade, I looked forward to every season of Game of Thrones. It was hard to believe that I was looking out at Blackwater Bay and looking down at King’s Landing. I then realized that as much as I enjoy reading fantasy literature, reading the classics of European literature is often more rewarding. With a little hope, endurance, and laughter, I will eventually read all the works of Držić and Gundulić in Croatian and return to Dubrovnik once again to red-pill normies while walking along the castle walls.

After all, I need something to do before The Winds of Winter is released.