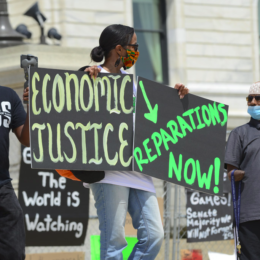 What are we to make of reparations for slavery to American blacks? It’s become a frequently repeated demand lately, and might be even more so later on. The strange thing is that that the further away in time we get from slavery, which ended well before living memory, the pricklier the topic becomes. Likewise, demands for reparations have increased, often by people who would be an embarrassment to their polite and industrious freedmen ancestors were they still around. Let’s take a look at both sides of the topic.

About three hundred thousand West Africans were taken against their will from their native shores, despite their natural rights to liberty, and brought to America. There, they and their descendants toiled in the cotton fields, as well as performing other tasks, without recompense. To right this wrong, they should be paid back for their labors.

That was the argument in a nutshell. Note that I pulled a fast one by neglecting to mention that it wasn’t whites who enslaved them. They were enslaved by their own African kinfolk and later bartered to merchant ships, typically for rum, beads, or trinkets. That’s what really happened, contrary to those who mistook the premiere episode of Roots as factual, or imagined Portuguese sailors with butterfly nets running after the natives through the jungle. The slave trade in Africa had been going on centuries before the first ship showed up to buy from the commerce that already existed. I left out some other inconvenient facts, too.

To this, I’ll add a couple of misfortunes that aren’t usually part of The Narrative about this, and have nothing to do with claims to back wages for distant ancestors. For one thing, the slaves lost their native tribal cultures. They did join together and create an African-American culture, but modern attempts at going further back into their roots haven’t worked so well. The highly inventive names which became fashionable since the 1970s aren’t genuinely African. Islam became popular with some, but most of their ancestors actually believed in Voodoo or something similar. For extra irony, Arab slavery was worse than that of the antebellum South. Finally, Kwanzaa is a profoundly artificial creation, and Paul Craig Roberts observed that its Swahili terminology is East African and therefore as out of place as singing “God Save the Queen” in Farsi.

The other misfortune is that blacks have had to live as minorities in a society not of their own making, and not run according to their own sensibilities. Therefore, when they won’t (or maybe can’t) conform to common norms, they’re sometimes judged negatively by others. Since they’re only an eighth of the population, these things are inevitable whether anyone likes it or not. They did have a parallel society of their own for a while, but they didn’t care for segregation.

Residing in America hasn’t really been entirely a bust for them, but that’s not how they see it. In the present day arrangement, they always will be minorities. They’re never going to call the shots. Even when Obama was in office, the globalists were the power behind the throne. (Perhaps that came as an unpleasant surprise to The Lightworker.) Now that Hispanics and Asians are present in unprecedented numbers, increasing with no end in sight, blacks are no longer the most influential racial minority.

Claims based on collective interests over historical events are fraught with difficulties. The principle itself can be argued for plausibly, up to a point, but there’s usually a lot of moral huckstering involved, and that’s especially so in this matter. The best way to think about such a claim is how it would be regarded if it were a class-action civil lawsuit.

One important fact is that although slavery was nasty and exploitative, it had been legal prior to the Civil War. The peculiar institution didn’t exist just in the antebellum South, as Hollywood historiography might have you believe. It had existed worldwide since the dawn of history, and only came into serious opposition during the Age of Enlightenment, after which white people were the first to abolish it. Thus, the first problem is that it’s impossible to make a tort claim regarding labor practices on ex post facto terms.

This is the same reason someone can’t sue on behalf of a long-departed ancestor because the factory he worked in during the 1880s didn’t pay minimum wage, had lousy safety practices flagrantly noncompliant with OSHA, scheduled twelve-hour shifts without overtime, had pollution staggeringly above present EPA limits, and used goon squads to resist unionization. Horrific conditions and starvation wages in sweatshops used to be commonplace, and still are in countries where the globalists like to relocate their factories. (Compared to that, pulling cotton balls off of shrubs all day might not have been too bad.) The problem is that you can’t file a class-action suit over things which hadn’t yet been forbidden by law. Moreover, since it happened well over a century ago, that weakens the claim further.

Other than that, there are no longer any slaves to compensate, nor masters to bill. Moreover, for whites related to fallen Union soldiers, the idea that we owe blacks a living is especially preposterous. Free blacks sometimes ran plantations with black slaves, beginning with Anthony Johnson who got hereditary slavery started — way to go, Champ! Some Indians owned slaves, including their fellow Indians, blacks, and a few white captives. Many whites arrived as indentured servants, and this counts too if one accepts the premise that forced labor well over a century ago merits present-day compensation. Therefore, the question of who pays and who gets paid is impossible to settle.

Still, the demand is that the government should cut a check to every black in the USA. Many thorny questions remain. Does this include recent arrivals too, like Somali fuzzy wuzzies and Haitian flotsam, or just the regular African-Americans? Moreover, many blacks are partially white or American Indian. Does this diminish the supposed victim status? If so, we know who will be expected to fund the giveaways, but will the government make full payment to pure Africans, half to mulattos, a quarter to quadroons, and it’s a wash for octoroons? If, instead, we go by the “one-drop rule,” then anyone can get an ambiguous DNA test and qualify. Then we’d all get a huge check — and have to hand it right back over to the IRS.

That brings us to the next matter: somebody has to pay for it all. Surely those expecting reparations are imagining a princely sum. Just as surely, some Leftist in academia will cook up a number far in excess of that. What is equally certain is that either figure, multiplied by the number of blacks in America, will vastly exceed the GDP. This certainly also will exceed the actual value of uncompensated labor, less expenses relating to upkeep, that occurred in the antebellum South.

For liberals who imagine that the government is an endless pot of gold, surely this is no problem. For grownups who understand math, it’s an insurmountable problem. One appropriate expedient would be to make payments in Confederate money; there was plenty of that, right? If that runs out, we always can use Zimbabwe dollars from 2008. They want a billion Zim-bucks each? Sure thing! More seriously, I hardly can do better than to quote from the first Fascist Decalogue of 1934:

Do not ever say “The Government will pay. . .” because it is you who pay; and the Government is that which you willed to have, and for which you put on a uniform.

Moreover, isn’t this the same government that long ago ended slavery? Why is it therefore supposed to pay compensation for the thing it eradicated at tremendous sacrifice? Considering the Civil War’s enormous losses in life and treasure, how about we bill the blacks? If claims based on collective interests over historical events are valid, then this is just the beginning of the counterclaim. For that matter, why aren’t they getting a special tax for all the neighborhoods they’ve ruined, and sometimes even entire cities? The property damage from decades of urban blight adds up to that which would be caused by a salvo of ICBMs.

Our overly generous social programs already have been an informal reparations effort. All those trillions failed to produce equality of outcome, because equalizing dissimilar populations doesn’t work. Moreover, the largesse has encouraged intergenerational dependency, worsening the problems it was supposed to solve. In that case, throwing more trillions down the black hole won’t produce better results.

One more matter is that collective guilt is not a valid concept, and neither is inherited guilt. If your father pulled a bank heist, you can’t be sent to prison for it. If your great-great-great-grandfather robbed a stagecoach, you won’t be hanged because of that. If some distant ancestor did something which was bad but legal at the time, you’re not on the hook for an exorbitant penalty. All that said, why should we even have a discussion about this? The idea of reparations for slavery is just moral huckstering, specifically an attempt to monetize guilt. It’s pointless to debate conmen. The answer is no.

Although the reparations claims as such are untenable for several reasons, isn’t there anything that can be done to alleviate the lugubrious plight of the blacks? These are the very people who have generated oceans of liberal pity, so surely they’re weak and helpless and we’d better do something right for these poor wretches. Long experience shows that nothing is going to make them happy here. Try as we might to do so, even after decades of handouts and preferential treatment, they’ll be the first to tell you how tough it is to be black in America. (Is that not enough to make tears well up? Isn’t it? What kind of unfeeling brute wouldn’t weep for them?) Then let’s try another way to fix this horrible mistake, shall we?

The evil of slavery was corrected long ago — over a century and a half, and counting. Yet there is another evil that remains to be corrected. Basic decency demands — I say DEMANDS — the one suitable solution! Those people long ago were torn from the bosom of their African homeland against their will, and the only thing that can be done is to right this ancient wrong by returning their descendants to where they belong. Can I have an “amen,” my brethren?

There is nothing for blacks in America but oppression and misery, something that torrents of liberal tears and mea culpa couldn’t (and won’t) remedy. Therefore, let the four-century failed experiment of multiracialism end at last. May these despairing wayfarers bereft of their native culture rediscover it amongst their Volksgenossen in their once and future Lebensraum. There, they can be the captains of their destiny, with no whites to oppress them and hold them back from being brilliant and creative. Now that we have passenger jets, ocean liners, and troop transports, not only is repatriation of this unhappy minority back to Africa possible; it’s a moral imperative that surely must be supported by everyone with a conscience.