Wallet Lives Matter! Or, Will the Real Racist Please Stand Up 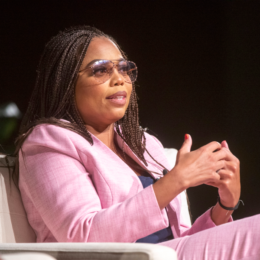 The anti-white, former ESPN personality Jemele Hill tweeted something stupid again recently. But it was inadvertently interesting, and so worthy of comment. She initially tweeted this:

If you vote for Donald Trump, you are a racist. You have no wiggle room.

Okay, nothing too interesting there. Pretty much all Leftists, and certainly all black leftists, find racism as the prime motivator behind everything white people do that they don’t like. This attitude gels nicely with their own natural ethnocentrism and has become their quickest route to power. They perceive with some justice that whites have become pushovers in today’s society when it comes to race. The letter R has indeed become the new scarlet letter in the twentieth-first century — but only for whites — and if you scream at them loudly enough about it, whites will cave and give black people whatever they want.

I apologize for boring you with things we already know. It was Hill’s follow-up tweet that I found so interesting.

Ok, your wallet is racist then. https://t.co/x0q1vGgbC1

Aside from her wallets-are-racist charge being entirely unreasonable (not to mention absurd), this tweet exchange should remind all whites of how powerful this racism charge really is. From a tactical perspective, a white person accused of being a racist has few obvious choices for rebuttal. There are indeed several self-defeating options laid out before him.

Despite probably being the best of the bunch, this last option is pure sophistry, and as a tactic laughable on its face. It assumes that the Left — especially the Black Left — actually cares about things like abortion, unemployment, and history. It assumes that the Black Left actually cares about black lives when its silence regarding the catastrophically high black-on-black murder rate so plainly belies this claim. They don’t care about black lives. They care only about power. To take the leaders of the Black Left at their word whenever they open their mouths is pure foolishness. These leaders, among whom we’d have to include Jemele Hill, know that their ethnocentric followers will support them over any milquetoast white stupid enough to take their silly argumentations seriously — even if it means more black abortions and higher black unemployment.

White people have to realize that these are not white people we are dealing with. For most blacks, their tribalist self-interest overrides their economic, religious, and civic self-interest. Most of them would rather suffer more poverty and more oppression under black rule than suffer less poverty and less oppression under white rule. Maybe this hasn’t always been the case, but it sure is the case today.

This is why the “Demz are the real racists” meme is mocked so mercilessly on the Right. It’s a loser’s gambit. It’s too clever by half. It ignores profound truths in order to harp on trivial ones.

It does at least show some fighting spirit, and with some adjustment could prove to be effective. After all, the Democrats and the Left are the real racists — it’s just that they are anti-white racists. This is the drum that everyone on the Right should be banging. It doesn’t matter if the Left and the Democratic Party are anti-black because even the blacks don’t care about that. And by “racist,” I don’t mean accepting the scientific fact that there are intelligence and temperament differences among the races. “Racist” in this case means seeking power for one’s race over other races for purely tribalist reasons. Whites may have been like this in past (and were relatively benign about it in many places), but not so anymore. Blacks, on the other hand, are becoming more and more like this every day, and they are anything but benign.

This leads to the second prong of our little counterattack. Thus far, the racist vs. not-racist paradigm cedes the high ground to the blacks where they, as the historically oppressed minorities they purport themselves to be, can easily paint themselves to be victims — even as they are victimizing whites. The anti-white racism charge, however, requires very little retooling to become the much more potent black supremacy charge. Such an accusation will force the Black Left on the defensive since fighting a largely non-existent “white supremacy” is their bread and butter. If such a charge were presented in any forceful and systematic way from the Right, sooner or later the Black Left would have to provide reasons why they are indeed not black supremacists.

Yeah, good luck with that. Nothing looks worse than seeing someone dissemble on the hot seat when the truth is not on their side. As we all know, the Black Left lives and breathes black supremacy. Proving this would be child’s play.

The final prong involves something other than race. It involves character. Labeling people on the Black Left as the real racists in the ways described directly above is tantamount to saying they have no honor. They are hypocrites. They are liars. They stand for nothing. The list goes on. These people claim to be anti-racism, yet they promote racism. This is the only page in their playbook. Bull Connor was never so two-faced. At least with Bull Connor, what you saw was what you got. With the Black Left, however, it’s anything but. The Black Left cannot even aspire to the high standards of moral probity expressed by segregationist stalwarts like Bull Connor.

Once a charge like this gains traction on the mainstream Right — and it could, since it nicely sidesteps race — then the issue becomes personal. It’s no longer Right vs. Left or White vs. Black. It’s Truth vs. Jemele Hill.

And from there it would take little effort to demonstrate that Jemele Hill is “racist” against all wallets except her own.