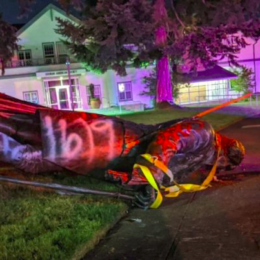 If there is one universal truth about humanity, it’s that we are, by nature, tribalistic. We identify with our tribe, whatever that tribe may be. In a monoracial society, tribalist loyalties can form around clans, nations, religions, classes, or even actual tribes, as is the case in many places in Africa. In multiracial societies, however, everything boils down to race. And in such a milieu, when all things are equal, it’s hard for people to value outgroup lives over ingroup lives.

Of course, unequal circumstances can override tribalism, such as when the Nation of Islam’s Louis Farrakhan disavowed the black Beltway Snipers in 2002 but acknowledged ties to them anyway. Say what you wish about Farrakhan, but in this instance, cold-blooded mass murder overrode his usual intense tribalism for the black race.

In the case of Black Lives Matter, however, tribalism tends to trump unequal circumstances. In fact, this is becoming more and more the rule for these people, given how they are less and less interested in hearing about how unequal the circumstances really are. By “unequal,” I mean the obscene propensity blacks have for murder, rape, and all other forms of violent crime. No group of people in the United States commits violent crime at the rate of blacks — both against their own ingroup and against outgroups. As a result, non-blacks have good reason to be wary of blacks, and police of all races often have good reason to use force, even lethal force, when apprehending them. These points BLM activists simply ignore, and instead focus on examples of perceived white-on-black crime as an excuse to further their tribalist agenda.

If they can make white people as a race feel guilt and shame over these perceived injustices, then whites will become more easily subjugated. And if some whites waffle over this (as conservatives tend to do), a little violence and intimidation will certainly nudge them in the right direction. In fact, the best way to nudge white people in the right direction is through violence and intimidation.

Case in point is Garrett Rolfe, the Atlanta police officer who justifiably shot a black named Rayshard Brooks in a Wendy’s parking lot, a man who had been driving drunk and resisting arrest. Not only did Rolfe lose his job, but he’s now facing a murder charge which could bring the death penalty. Soon after the incident, “protesters” burned the Wendy’s down and faced no charges as a result. Popular opinion, in the press at least, supports the arsonists, their BLM enablers, and whatever deep pockets enable BLM.

The message could not be clearer: Do not fuck with us.

How’s that for violence and intimidation?

American Renaissance recently called attention to another incident in which Lee Fang, a journalist for The Intercept, tweeted a video of a light-skinned black man questioning why black lives seem to matter to blacks only when whites take them.

Asked everyone I spoke with today if there was anything they wanted to get off their chest about the movement. Max from Oakland, a supporter of BLM, had a measured critique he wanted to share. pic.twitter.com/07qMQyCdJ9

It’s a reasonable question, and he asked it politely, but did not skirt around the fact that blacks murder blacks at a much higher rate than whites do. For this, Fang nearly lost his job (a black co-worker complained) and was forced to make a groveling apology. His sin was to cast light on the inequality of the circumstances which could only underscore the absurdity of black people complaining about violence from whites. It does not matter that the man in Fang’s tweet was making valid points. What does matter is BLM’s ultimate goal of subjugating of whites, which Fang’s tweet was undermining.

The American Rennaisance piece also mentions an incident involving David Shor, a data scientist who had worked on Barack Obama’s reelection campaign. Shor simply tweeted data which reveals that peaceful protests are more likely to swing elections in the Democrats’ favor than violent ones.

For this, he was fired. He was fired, in essence, for questioning the violence that BLM uses to achieve their conquest of whites. It doesn’t matter whether Shor even agrees with this goal (and the echo signaling in his Twitter handle indicates that he probably does). What matters is that Shor was looking to impede the use of violence as a means to the BLM end. And since violence is central to the existence of BLM, he cannot be forgiven.

So if Black Lives Matter is not a black supremacist organization, why does it prop itself up with lies and insist on the use of force and destruction? Is it doing all of this merely to achieve political and financial equality with whites — as if once they achieve this noble goal they’ll just pump their brakes and willingly disband? It’s ridiculous to even consider.

No. Black Lives Matter and groups like them will never stop.

When looked at from an evolutionary perspective, we have two distinct and contrasting groups (blacks and whites) competing for control over a political ecosystem (the United States). The whites have the advantages of numbers and wealth, but each of these are dwindling. Blacks, on the other hand, have the advantage of ethnocentrism, and that’s certainly growing. Black Lives Matter is the tip of the spear of black ethnocentrism. Its key animating principle, as with all tribalist initiatives, is to value ingroup lives over outgroup ones. Black Lives Matter. . . More Than White Ones is what the organization should be named. They are far more racist than the people they condemn, and they seek nothing less than conquest.

In so many words, black supremacy.

Of course, there is more to this picture. Many Jews play a role, either in funding BLM, demonstrating along with them, or cheering them on from their perches in the mainstream media. Jews, by and large, have always shared the same anti-white agenda as blacks, and so this alliance is as strong as ever — despite the spate of black-on-Jewish violence from earlier in the year. Hispanics and Middle Eastern Muslims are as ethnocentric as blacks are, and they are wary of BLM causing havoc in their neighborhoods. At the same time, these groups will not lift a finger to save white communities caught in the BLM bind.

As for how whites should respond to this outrage, the first needs to be to unshackle themselves of guilt. Blacks perform badly in life due mostly to low average IQ and poor impulse control. These are genetic factors over which whites have no control. If anything, whites have done more than any other group to protect blacks from themselves (through strong policing) and to bestow influence, wealth, and power upon them which they do not earn (through affirmative action and various wealth-distribution programs). Whites have had a net positive effect on blacks, and should, therefore, view these riots as a betrayal, not a comeuppance. And if anyone wishes to bring up how whites should pay for the legacy of slavery, whites should simply point out that the Black Lives Matter does not care about slavery. If they did, they’d move to Africa and start riots in places like Eritrea, Burundi, and Sudan, where slavery is still rampant.

No, BLM would rather cause trouble in one of the few places on Earth where blacks prosper and where all white slaveowners have been dead for well over a century. This is not about slavery per se. It is about using a long-defunct system of slavery as an evolutionary weapon against white people.

Whites next need to realize that they are in a demographic war against most non-whites, blacks especially. Black leadership nearly always acts on its tribalism and will continue to take take take from whitey as long as whitey is willing to give give give — or even if whitey is not willing to give. Essentially, they want power over whites. And they will get it and exploit it ruthlessly if the whites let them. The overarching goal of whites from now on should be not to let them. Whites must realize that they are creatures of God (or the gods) too, and there is no future for whites when groveling at the feet of violent, barbaric people who despise them.

Another thing whites can do is to start talking about black supremacy and viewing all anti-white actions on the part of blacks as this very thing. Whether it’s crime, affirmative action, welfare, gun control, or any initiative that cuts into the white share of the pie, whites should view this as black supremacy. It’s not enough to call it racist or anti-white. No, it’s black supremacy. This a pertinent distinction, because a year ago Congress unanimously condemned white supremacy. And if they condemn white supremacy, then it is not too much of stretch for them to condemn black supremacy as well. Further, accusing BLM of black supremacy takes whites out of the equation and forces its supporters to prove how BLM is not a supremacist organization.

Good luck with that.

Further, imagine hundreds of irate white voters calling their white representatives each day demanding that they condemn the black supremacy of Black Lives Matter. Maybe eventually there will be someone crazy enough to actually do it. Like this guy.

Finally, in the face of the encroaching black supremacy of Black Lives Matter, whites should prepare for the worst and stock up on ammo. Because when the revolution comes, it’s gonna come fast.

« The Feds Just Don’t Get It