The European Soul in the Age of Tumult 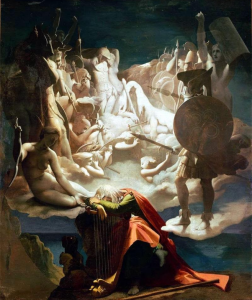 The first rocket in over a decade has blasted off from US soil, bound for stars, aiming to dock with the International Space Station. Yet the country it leaves behind is set aflame, riven by racial strife in some of the most widespread unrest in recent memory. The world emerges from months of stasis and pseudo-imprisonment, facing an uncertain political and economic future in the wake of the coronavirus. In 1992, Francis Fukuyama predicted the end of history as the liberal order triumphed against the Soviet Union in the Cold War. For a time, it may have seemed he was correct, and the fundamental questions of ordering human society were answered. However, contemporary events have proven him ultimately wrong. Globalization is the compression of time and space, and our world is accelerating. Shocking history is being made almost daily. Unprecedented events are shaking our civilization to its core.

We are the pivot generation — those born at the confluence of the greatest crises our society and way of life have ever known. More than ever, we need to know who we are and what we believe in. To overcome and to triumph as a group, we must be unwavering in our identity and our purpose. It is clear to see from our leaders that we are not. In Minneapolis, at the height of the nascent race riots in the wake of George Floyd’s murder, the Democratic mayor Jacob Frey ordered that police were to abandon their posts and allow looters to destroy their precinct. Buildings were merely symbolic, he opined. That is exactly correct; this act is exemplary of a ruling elite that has lost its nerve in the face of great events.

Canute-like, the global order tried to turn the tide of the coronavirus. They placed the entire globe under a state of house arrest, attempting to minimize the number of deaths. Strategies such as “herd immunity,” where some would die for the overall wellbeing of the group, were roundly rejected by both the citizens and leaders. This is not surprising in an age where self-sacrifice is almost completely absent, where a secular neurosis has come to form the basis of decision making. We have suffered a catastrophic loss of confidence; the center of our vapid world could not hold. In an irreligious, post-ideological era, only consumption and survival are valued. It seems almost inconceivable that these are the same societies who twice in the last century sacrificed millions of their own in World Wars for power and grand beliefs. Atomization, self-doubt, and fear have corroded the very fabric of our souls.

Like the late Romans, we live in a state of resigned anxiety. We understand that the world that preceded us is collapsing, and we enjoy no comforting consolations either from belief in a divine presence or from the knowledge we will pass the world on to our descendants. There have been plagues before, but the unprecedented response to the present pandemic could only have happened at this juncture. Illegitimate rulers are managing the decline of decaying systems, overreaching their powers to maintain the illusion of stability and immortality. They live in a state of almost-unmanageable terror, hoping they will never be called to account for their crimes — either by their constituents or by the Gods. Contemporary man, following his leaders, suffers the same anxiety. He is haunted by the total environmental death of the planet, the demographic replacement of his own people, and ultimately by his own mortality in a Godless world. Modernity offers no answers to these questions, but simply shouts from the battlements to retreat, to hide, to abandon your post and capitulate.

The struggle we now face is not that of a singular country or community. The European, wherever he dwells, is engaged in a cataclysmic battle for his own soul. Whether in squatter camps of the dispossessed Boers of South Africa, or in the rubble of his family store in Minneapolis, we are the embattled few — the thin white line. In the middle of the last century, Europeans constituted 25% of the global population. They are now fewer than 11.5% globally and the figure is falling rapidly.

We, we unhappy few now face a stark choice about who we are, about the content of our soul. In human life, the Grim Reaper is ever-present, and the prospects of loss and failure are something we must overcome within our own psyche. The Reaper has mouthed boo to our elite, and faced with this they have abandoned us, content to fill the void at their spiritual center with profit, falsehoods, and flattery to those who would destroy us. Many have joined them. They live life as a purely singular atom, consuming in their darkened rooms — denouncing their race and nation, negating their gender, denying who they are and what they could become. The unending stream of history and world events has tested their mettle, and they have been found wanting.

This is the biggest problem facing us. It is not a question of material conditions or demographics, but of answering the living and constantly renewed question: What is the European soul? While our leaders and their acolytes recoil in the face of this existential riddle, there are those who have taken up the broken shards of the mirror that once reflected who we are back at us, and seek to repair it.

As our craven comrades flee the field, there are still some willing to fight for our future.

This fight begins by re-rooting ourselves in world history. It begins by accepting that we are outnumbered and beleaguered, that everything is against us, except for the fact that we are the inheritors of the greatest treasure that one can possess. We are the custodians of thousands of years the European spirit, passed from generation to generation and bequeathed to us at this inauspicious hour. The question of the European soul can only be answered with the simple assertion that its purpose is to be continued, that we cannot let that great flame be extinguished.

While others dim their fires, hoping for their light not to be noticed by those who would extinguish it, the differentiated man, the true European, burns like the Black Sun. We dedicate ourselves to living in the style of our forebears — we turn our lives into a heroic epic, we live in tune with the land and commune with our Gods. Once we understand that physical death is a mere trifle compared to the death of the soul, we will once again take up our destiny as the engine of world history. We cannot shrink from what is demanded of us in this crucial hour, we cannot be cowed by the shadow of our own mortality.

We must accept privations with glee. We must look upon the challenges of the world and acknowledge that the greater the depth of crisis, the greater the share of glory for overcoming it. We must learn to revile those who plead for us to retreat, and instead soar upwards like that star bound rocket. This is the European soul, the world-defining essence that has reappeared again and again in our darkest hours. Our primary struggle now is not external, but internal. Only by transcending our lesser selves and by becoming stronger, wiser, more spiritually-attuned, and more versed in those who came before us can we develop the mental fortitude required to win the struggle.

We are the pivot generation. We are Europeans. Stoke the internal fire of your own Black Sun, shine out as an example that will rally others to your cause. Lock gaze with the Reaper and dispel his power, embrace Dasein and accept your mortality willingly. Transcend by seeking a place in eternity by transforming yourself into a hero in the unending saga of European history; a history fused into our very soul. To those who waver in this age of tumult, only oblivion and ignominy await. To those who embrace the European soul as their shield in the coming battles, whether in this life or the next, we will have our victory.

» Meditations on the Mysticism of Yomawari: Night Alone