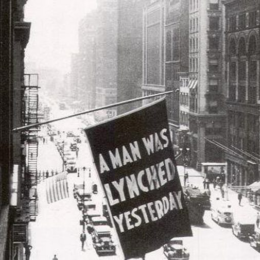 Six black people have been found dead, hanging from trees, during the month of June so far. They were all ruled as suicides by local police. Black people refuse to believe that’s true, of course. The circumstances of these deaths too closely resemble the lynchings of yesteryear, right down to the surrounding social turmoil and the highly public spectacle of the corpses.

Strange fruit is never pleasant to behold, but lynching has been mythologized into a form of martyrdom in the phony religion of black innocence and white guilt which exploded into mass chaos following the death of Saint Floyd.

Of course, black Americans no longer live in fear of lynching. They are far more likely to lynch themselves than to be lynched by white people. But lynching is a lightning rod for fantasies of revenge and cited as evidence for the Saxon beginning to hate again. It would be politically inconvenient for incidents like these six deaths to be exposed as suicides, which have been inflated by the press and black activists into fraudulent metapolitical stunts, for that would suggest there is no present danger to the black community beyond their own activism and normal misbehavior, and a tacit admission that black politics is near-exclusively reliant on milking white guilt or fear.

Of course, we know that these things are true, but a great many people do not; the fact that these unfortunate deaths were immediately linked to lynching, with the Washington Post even suggesting the behavior of the coroner’s office resembles the Jim Crow era, shows that echoes of the last century are still enough to haunt the nation’s collective psyche.

Politicizing death in the United States was formerly taboo, a reflection of the nation’s founding polite, Anglo, bourgeois society. This taboo has steadily been eroded, however, with the obvious example being BLM canonizations of dead black people for their aims. At this point, the people dying don’t even have to be related to current social unrest for their corpses to be turned into a soapbox; a 19-year-old economics and history double major at Cal Berkeley was shot and killed in the middle of the night, and Berkeley’s official statement on his death included a consolation clause affirming the “stress, grief, and anxiety related to the coronavirus pandemic and the recent murders of George Floyd, Riah Milton, and other Black Americans.”

I wish I could say such a thing is an unprecedented attack on the sanctity of life itself, but it’s not unprecedented. Really, this state of affairs was inevitable, and such a thing should be obvious to anyone who (correctly) views politics in a multicultural society as war by other means. When mortality is invoked politics — and the deaths of black s is the entire basis of Black Lives Matter — then all death is fair game for grandstanding. The next logical step is for people to actually start killing each other, which they’re already doing.

If all death is political, whether due to viruses, lack of healthcare services because of a virus, police officers, street thugs, or any other laundry list of societal hot buttons, then it won’t take long for people to politicize their own deaths before they pass on. It also won’t take long for people to manipulate others’ deaths for political ends when the details of their passing don’t quite fit a narrative. The cynic in me itches to suggest either that these hung blacks took their own lives in such a spectacular way because they knew what their impact on the news cycle would be, or that third parties saw an opportunity to take advantage of a dead black and staged their corpses. I’ll refrain from arguing that either of these things is true; nobody has all the facts, and even if we did, my major was in languages, not forensics.

Of course, those that make the news don’t need to prove their qualifications before making a statement, so long as what they say or do is either sufficiently mainstream or strategically controversial. Knowing a dash of history is enough to make a tenuous connection to past events for the purpose of stirring up resentment, and claiming to be disadvantaged is enough to claim a spot on the podium, regardless of whether or not this so-called “lived experience” merely instills biases in a person as opposed to an informed position.

This, of course, is only so many words for “we are the only ones who care about the truth.” What, then, is the course of action to take? These narratives are out of our hands. We can debate, debunk, and disagree all day, and such pursuits do bolster the intellectual backbone of our spheres. We know that we have credibility. In the eyes of wider society, however, we do not.

This does not mean that we give up. Rather, it means we disengage, we mock, and we refuse to participate in the game. To furtively attempt to battle the claims of those who wish to destroy us is to play by a different set of rules of engagement than the ones they use against us, which is a mere recipe for disaster. Instead, reject the enemy’s premises on their face. Name their assumptions for what they are; absurdities, falsehoods, and tepid moral relativism. Be rude. Be offensive. The gloves have come off, and to pretend the public is looking for civility is to ignore the fact that the BLM movement has found their moment through a brazen display of force. Those that we wish to bring to our side are those that have some capacity for detecting falsehoods in the first place. If we project this attitude of irreverence in the face of those who demand we kneel, we project strength in the face of power. That is far more attractive to the general public than politically almost impotent displays of facts and logic. Once we catch people’s attention, they can look to our intellectual fortitude themselves, which is the real value of the Right’s vibrant discourse.

Nobody is convinced by Twitter owns or opinion editorials. They’re convinced by men taking proper action, and then observing that they know what they’re doing upon closer inspection. This site alone contains entire tomes of rhetoric that demonstrate we’ve done our intellectual homework. Rather than trot our arguments out in front of those who don’t care, let’s allow those who will care to find it themselves.

The one way you’ll never convince people is when you tell them what they ought to be convinced of.

« How Plessy v. Ferguson Came About