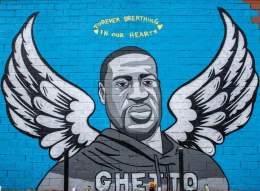 Nearly every church is mourning a drug-addicted, deadbeat dad who pointed a gun at a pregnant woman’s stomach. You would almost think George Floyd is on his way to beatification based on the reaction from Christian groups worldwide.

Everyone, from the Pope to fire-and-brimstone Evangelicals, believes Floyd’s death is a call for Christians to fight racism. The worst sin in the world is racism, and all Christians must atone for it. No denomination seemed to disagree with this sentiment.

The message contrasts sharply with President Trump. Trump famously cleared the park in front of the White House so he could take a picture in front of St. John’s Episcopal Church. The church had been burned by rioters the night before, so Trump thought it would be a good idea to stand out in front and hold a Bible. He would show the world he protects churches from far-left mobs. The photo did not have its intended effect among Christian leaders, drawing far greater condemnation than the rioters’ looting and vandalism of churches.

Trump didn’t realize that, outside of loyal evangelicals, Christian institutions stand opposed to him and back Black Lives Matter.

Mainline Protestant denominations are out front in demanding racial justice.

“Our long-term commitment to racial justice and reconciliation is embedded in our identity as baptized followers of Jesus. We will still be doing it when the news cameras are long gone,” said presiding Episcopal Church Bishop Michael Curry.

“I do want us, particularly those of us who are the beneficiaries of white privilege, to understand that our African-American sisters and brothers are gasping for breath,” declared Methodist Bishop Bruce Ough. “For 400 years, through slavery, lynching, apartheid (Jim Crow), the civil rights movement, institutionalized racism, and long-delayed police reform, the African American community has been crying out, ‘I can’t breathe.’ And yet, the knee of oppression, white supremacy, and inaction remains. If we see only riots and protests, we are not looking close enough.”

“The racism, white supremacy, and anti-Blackness so prevalent within our country must end!” exhorted the Capitol Hill Ministry of the Presbyterian Church. The ministry demanded Trump “proclaim a national day of ‘Mourning Against Racial Injustice’ on June 19, the traditional day of celebration for African-Americans over the end of slavery, where flags will be flown at half-mast.” The church also wants legislation that categorizes police racism as a hate crime.

The more conservative Missouri Synod Lutheran Church issued a worse statement. “Discriminatory treatment of human beings on the basis of race is irrational evil and results in evil,” read the Church’s statement. “America’s original sin of legal racism, the denial of human rights based on race, has reaped the whirlwind.” The statement added that “God’s word rejects racism” and the conservative church had zero tolerance for racial feeling.

Many conservative evangelicals were on the same page, with several megachurch pastors saying they proudly support Black Lives Matter.

The message remains the same across the Tiber.

Pope Francis delivered a public message expressing his profound sorrow over George Floyd’s demise and made it clear that racism is a major sin to the Catholic Church: “Today I join the Church in Saint Paul and Minneapolis, and in the entire United States, in praying for the repose of the soul of George Floyd and of all those others who have lost their lives as a result of the sin of racism. . . We cannot close our eyes to any form of racism or exclusion, while pretending to defend the sacredness of every human life.”

It would be interesting to know what makes Floyd “just” in the eyes of the Vatican.

The black archbishop of the nation’s capital, Wilton Gregory, even condemned Trump for visiting the John Paul II shrine at the Basilica of the National Shrine of the Immaculate Conception.

The Greek Orthodox Church in America was the same as everyone else.

“The unjust slaying of George Floyd cannot be where America stands,” said Archbishop Elpidophoros, the head of the Greek Orthodox Archdiocese of America. “Violence only breeds violence, but when such violence is perpetrated by those in authority, we must all stand up and say: ‘Not on our watch!’ We must stand against racism and stand for equality for all.”

It’s a unique occasion for this diverse array of Christian groups to all speak with one voice. The many differences between denominations were shunted aside to mourn for St. George Floyd and cry “Black Lives Matter.”

A few prominent Christians compared Floyd to Jesus Christ. “After being brutalized and humiliated by civic authorities, and being pushed to the ground as a crowd watched, this innocent man was killed ultimately by asphyxiation, not by a loss of blood, and in his final moments, he cried out for a drink of water and spoke to his mother,” Father James Martin, an influential Jesuit, tweeted.

After being brutalized and humiliated by civic authorities, and being pushed to the ground as a crowd watched, this innocent man was killed ultimately by asphyxiation, not by a loss of blood, and in his final moments, he cried out for a drink of water and spoke to his mother. pic.twitter.com/3BT2s3xg5B

Many Christians on the Dissident Right will dismiss these statements and opinions as of “modernism” or “heresy.” But the Gospel calls upon its followers to sympathize with the downtrodden and outcasts. The Black Lives Matter propaganda is coming from conservative and liberal Christians alike. To the bishops, priests, and pastors, Floyd was not just a leper Christians are called to serve — he was a martyr for the faith. Even though Floyd appeared to make no professions in his last moment, the popular narrative can imagine him as a profoundly Christian figure. Christians all must suffer and groan against the injustice of “white supremacy.” This is the new crusade for the faithful.

Even Christianity must bow before our new, dark-skinned gods.

Most right-thinking Christians find this baffling and a mockery of the faith. But regardless of their own feelings, this is what institutional Christianity is. It is another corrupt vestige supporting white dispossession. The language and values of Christianity, albeit bastardized, are effective in advancing non-white grievances and white guilt. The new faith demands white sinners pay their penance and literally wash the feet of POC.

It is critical we develop a moral framework that counters this insidious mindset. Too many good whites will know deep down that their churches are wrong on this, but they have no way of articulating why. The Dissident Right must be there to offer them the language to resist the malarkey from institutional Christianity.

« When the Dust Settles