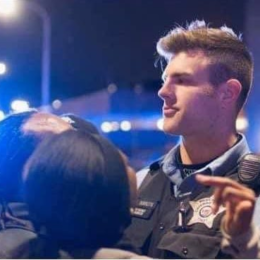 Perhaps many of you will remember this.

On April 1st, 2007, two white police officers were executed by a black thug named Demeatrius Antonio Montgomery. Officers Sean Clark and Jeffrey Shelton were responding to a disturbance call at an apartment complex when Montgomery snuck up behind them and shot each in the back of the head. Both men were married, and Clark had a three-year-old son. His wife was expecting their second child at the time of his death.

Here is a photograph of the perp. 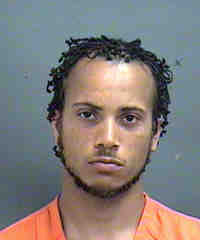 And here are his victims. 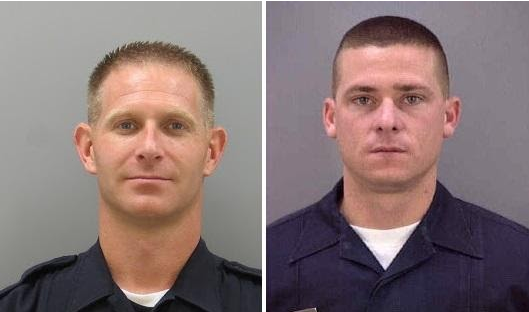 As outrageous as this event was at the time, it has pretty much disappeared down the memory hole in the years since. And as we all know, incidents such as these occur all the time, with blacks committing a disproportionate number of the murders in question. [1] Blacks, in fact, make policing a much more difficult and dangerous job — especially for white police officers, who make up a distressingly and disproportionately high percentage of officers feloniously killed on duty. [2] Yet, in protecting the public from the substantial black criminal element, police officers are largely responsible for keeping crime down in black-dominated areas. This translates to saving lives. The shrinking murder rate in Rudy Giuliani’s New York City during the 1990s demonstrates this quite well. So does the skyrocketing murder rate in post-Floyd America where police are bowing to political pressure and not policing blacks as much as they should be.

So, as an American citizen who benefits from the law and order that police maintain, I’d like to say thank you. I appreciate what you do.

But now, in the wake of the killing of black felon George Floyd on May 25th in Minneapolis, whom do black Americans blame? Is it Floyd himself for taking meth, passing counterfeit bills, and resisting arrest? Is it bad luck, given that Floyd had had medical conditions (such as coronary artery disease, hypertension, and COVID-19) which may have prevented him from surviving such a stressful situation? Is it themselves for producing an obscene number of violent criminals every generation? Or is it the very people who have been protecting and serving them for decades? Sadly, it’s this last group that gets the blame: the most blameless of all.

Doesn’t this bother you? Doesn’t it bother you even a little that had the perp been white or the Minneapolis officers black, no one would have made a fuss about this, just like they didn’t make a fuss over how Officer Mohamed Noor murdered Justine Damond in cold blood in 2017? And now with every major business, corporation, university, social network, media outlet, and tech giant siding with Black Lives Matter rather than the police, don’t you feel betrayed?

The news is impossible to ignore.

America — and, sadly, not just black America — is calling for police reform, even the dismantling of police. Their message could not be more clear: They are painting you all as the bad guys. Meanwhile, they ignore all the dangers and sacrifice you endure. For example, since Floyd’s death, black thugs have murdered three white police officers, Stephen Williams, Cody Holte, and James Blair.

And it is not merely officers being killed. They are suffering horrific, life-changing injuries as well. Here’s a link to a list of police officers who have been injured or killed in the rioting. It is a long list. I am most struck by these three incidents:

The rioters say nothing. Oh, wait. No. They chant “Black Lives Matter!” while spray painting “ACAB” (All Cops Are Bastards) or “FTP” (Fuck The Police) on police cars just before they torch them.

As an added insult, not only are your lives forfeit in the mind of the public, so are your jobs. If a black perp resists arrest to the extent that you begin to fear for your life or the life of another officer, and then you shoot him as you are trained to do, you could lose your job. Not only that, but you could also lose your career, which, most likely, you built from nothing. Look at how Atlanta officer Garrett Rolfe was summarily fired after the June 12th shooting death of Rayshard Brooks. Video shows that officers were being respectful of Brooks, who violently resisted arrest and aimed a taser at the officers. Rolfe was within his rights to shoot him, yet he lost his job anyway.

“Protesters” then burned down the Wendy’s where this incident took place, chanting “Black Lives Matter” and “No Justice, No Peace!” And, of course, the NAACP is calling for even more of these “protests.”

This, frankly, is an outrage.

I certainly don’t blame police officers, especially the white ones, if they choose to resign from serving a hostile public and ungrateful, traitorous employers. It’s looking like fourteen Minneapolis officers are resigning. Good for them. Ten members of a Florida SWAT team are also resigning due to the “disdain” that local officials have for their unit. This seems like the right response. In Buffalo, fifty-seven members of the city’s riot response team have resigned as well. This was in protest to the suspensions that two officers received after pushing an elderly troublemaker to the ground. But as justified as these resignations were, the victory they achieve can only be hollow.

Sadly, this can only be a lose-lose situation for white cops. Black or non-white ones in general can escape the racism charge if they shoot and kill a dangerous black. But not a white officer. For doing his duty in the most drastic of circumstances and surviving — unlike Officers Clark and Shelton above — a white officer could, at best, lose his career. At worst, he could be incarcerated among the very criminals he took an oath to protect the public against. And if he doesn’t survive, well, let’s not pretend that American public white or black will care much about that. Not like they care about violent felons such as George Floyd, whose life, it seems, is far more valuable than yours.

So, what should you do?

In the short term, I imagine that you can hunker down and keep doing your duty. You can hope that the next black thug doesn’t come your way. Because if he does, you’re facing a real dilemma. If you apprehend him, and you’re risking your life, your freedom, your career, and your reputation — your entire future, that is — just for doing what you are supposed to do. And if you don’t apprehend him, then you will be allowing criminals to break the laws you once swore to uphold. And this, undoubtedly, will result in more dead white people that no one will remember. People such as these, all of whom perished in May at the hands of black thugs:

Who’s going to be marching in the streets over them?

As for the long term, we all know that this situation cannot last. Without police, this multiracial society we live in will descend into chaos. It will become a prison nation, divided mostly on racial lines. There will be no law and there will be no peace. Because what you do is crucial for a functioning society, we must regard those who wish to hobble you on the job and ruin you afterward — that is, your employers, our leftist elites, most of black America, and a shamefully large chunk of white America — as not only your enemies, but ours too.

I say this because this is a racial thing. Unlike in America, blacks are indeed oppressed in black-run countries in Africa, yet they never protest and riot like this over there. Only here. Why? Because it galls them that they have to be policed by whites. It’s racism, straight up. They would rather live in a chaotic black environment of high crime, poverty, and unemployment, than in a well-functioning white society that occasionally kills black thugs who resist arrest or attack police officers.

So, this is why I am asking all white police officers to consider white nationalism as a way out of this bind. We all want our well-functioning society back, and forming an ethnocentric, near-homogeneous white society is the best way to achieve that. Please share this article far and wide, and make it part of your discussions of this difficult topic, even if only to be critical of it. I believe, however, that with enough thought and research, you will conclude that white nationalism is the only antidote to this multiracial nonsense that our Leftist elites are currently inflicting upon us. I am hoping you can feel this too. When whites were over eighty percent of the American population, before 1965, we didn’t have these problems. Sure, there were flare-ups, but not like this — not to the point of American leadership and its media and monied class cheerleading for the criminals and warlords who are now leading armed insurrections in many of our cities.

So please consider coming back to your own. It will require only an attitude adjustment — a realization that racial diversity, especially when blacks are involved, will inevitably lead to conflict and war. Once whites can re-establish connections with each other and overcome the insidious taboos that keep us apart, we will be better able to see this threat for what it is: a vicious, unprovoked attack on white America by people who wish ultimately to destroy it and the people who created it.

If you join us, we will not betray you.

[1] The FBI keeps what’s known as LEOKA data, or Law Enforcement Officers Killed in Action. From this data, I compiled a table of officers feloniously killed in the line of duty by decade and race of assailant:

Note how blacks, who make up thirteen percent of the US population, are overrepresented on average by a factor of three among those who murder police officers.

Keep in mind that the FBI didn’t start differentiating Hispanics from Non-Hispanics until 2017. In the latest data, the FBI reported that seventy-seven offenders from 2011-2019 were Hispanic or Latino. While it is true that someone in this category could be considered fully white, this is most often not the case. So, if we subtract seventy-seven from the 271 “white” assailants from 2011-2019, we get 194. This means that whites may well have been responsible for only forty-two percent of the officer feloniously killed during this time. This is about one-third less than the proportion of whites in the general population, which is currently hovering above sixty percent.

[2] The FBI also keeps tabs on the race of the victim officer. Here is that information from the same time period:

Note not only how whites are grossly overrepresented among the victim officers but how their proportion of this tragic group is increasing. The same caveat applies with Hispanic officers here, with the FBI reporting that sixty-two Hispanic officers were feloniously killed from 2011-2019. Subtract this from 395 gives us 333, or seventy-three percent, still a disproportionate number of white officers killed when compared to their proportion of the general population.

« Google is a Dirty Word

» Saint Louis: From an Anti-White Point of View