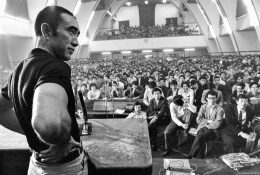 Yukio Mishima, one of the Right’s most celebrated authors, took part in a debate at the University of Tokyo in 1969 with members of the radical Left-wing student group Zenkyoto. The debate was filmed, though the tapes were thought to be lost for over 50 years. Upon discovering the archived footage, the debate was remastered and subtitled in English, making Yukio Mishima’s final public debate available for viewing for the very first time since it took place. In addition to the debate footage itself, the documentary features commentary from leading scholars, historians, and firsthand witnesses. You can watch the trailer for this historical documentary here. It’s a good year to be a Mishima scholar; between this film, and Riki Rei’s translations of several historical Mishima texts, the author’s message has never been so easily accessible and understandable. For our articles on Yukio Mishima, including Riki Rei’s original translations, click here.