Mask of the Red Chinese Death! 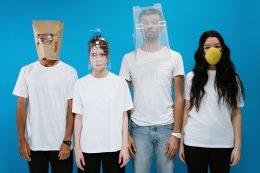 Three weeks ago, soon after the first “shelter in place” orders were being handed down by governors throughout the nation, I made a decision to start wearing some kind of “mask” when in public or around others. My job is considered “essential” because the industry I work in is tied to national infrastructure. Therefore, I also decided to wear a mask at work.

Initially, I resorted to a handkerchief. I have a half dozen of them, so it was no inconvenience at all to keep them laundered and fresh. I even toyed with a variety of improvisational mask ideas, until a few days later when a nice lady acquaintance gave me a full box of surgical masks. I have used them conservatively the last 3 weeks, spraying the 5-6 that I have thus far used with disinfectant and getting a few days of use out of them before discarding.  I’m sure this isn’t what the manufacturer or medical industry would recommend, but I do not want to run through my supply too quickly.

As readers will note, up until a few days ago, our government and its media lackeys were covering up the shortage of masks that a lack of foresight (and outsourcing to China) had caused. In their haste to CYA the issue, they warned the public that wearing masks did “little to protect” the wearer from the virus. Some even suggested that masks could exacerbate the situation and increase your chances of becoming infected. Some media outlets were a little more honest about it and tied the problem to preventing widespread panic and hoarding, causing an even greater shortage for medical personnel.

Of course, the threat of panic was a valid concern. But the media threw the baby out with the bathwater and didn’t entertain suggestions of improvised masks. Instead, they doubled down on the notion that the masks would not be adequate protection for the user from exposure to the virus. Inexplicably, only a few days ago the government, media, and medical establishment began to backtrack and “rethink” the wisdom of wearing masks.

I’m not writing this essay in an attempt to argue the pros, cons, or technical aspects of wearing masks during this pandemic. Instead, I want to examine the social phenomenon that has been exposed by the debate around masks. As I’ve gone about my business, I’ve endured snide comments, chiding condescension, snickers, even some finger-pointing and laughter in the early days of the lockdown by an African American woman at a grocery store. There is a telling psychology behind this behavior that I believe embodies the absolute worst of modern Western culture.

Notice that the thrust of the debate around masks, and the justification for not wearing them, has been that a mask will be inadequate to protect you. Yes, you, Mr Individual, Mr. Center of the Universe. You shouldn’t be bothered with a mask, because you won’t be saved by one. Never mind the absurdity of telling people that there is no personal benefit at all in covering your nose and mouth. Even a nominal 5-10% level of protection is better than no protection at all, and even I, a non-medical novice, realize that some percentage of pathogens get spread through atomized moisture particles that can be stopped by a mask.

But hey, I get it! For some people, the inconvenience (and embarrassment) of wearing a mask and looking like a paranoid germaphobe is far too much to ask when the personal benefit is so small. Notice, again, that this line of reasoning centers around our own personal convenience and feelings. It completely neglects to account for the potential of preventing infection of others. It doesn’t even lend weight to the idea that preventing the spread of other contagions, like the common cold or flu, at such a critical time, might be good for all of our communities.

People are selfish, and neoliberalism is the absolute manifestation of human selfishness. Be it the act of wearing a mask to protect your neighbor, or giving up unhealthy habits like heavy drinking and illicit drug addiction, or promoting modesty by simply not hosting a dildo-infused gay pride parade in a local community, or not having “transgender story hour” in order to help shield innocent children from hyper-sexualization, the modern Westerner will fight tooth and nail to protect his right to indulge in decadence while watching everything crumble all around him.

This inane selfishness isn’t limited to mask-wearing. Just today, I saw a tweet from RamzPaul flouting the mandate to maintain social distancing by suggesting he would livestream a public outing with some friends. Libertarians often stretch incredulity to such limits that they lose all credibility for the valid beliefs they hold. This nonsense is rooted in the same ill-conceived selfish individualism as the mask issue.

Thinking of sitting down in a restaurant and having food and drinks with friends this week.

Maybe I will livestream it. Would you guys hiding under your beds while wearing masks like to watch?

This divide between selfishness and selflessness represents the chasm that exists between neoliberal conservatives and many of us in the Dissident Right. Modern conservatism is defined by libertarianism taken to the extreme, where every event is a hoax that threatens individual liberty and every participant a crisis actor engaged in a plot to subvert the Constitution. It wouldn’t shock me at all to hear someone claim that masks are being laced with viral contamination in order to get us all sick. The current madness is one of the many reasons why Right-wing political ideas are mired in a muck of our own creation.