The Last Day of Christmas 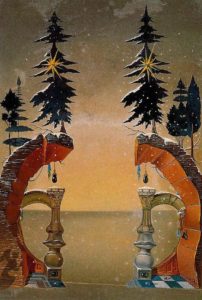 A few years ago I took my four-year-old son to a Santa Claus event being held at a local supermarket. They were offering snacks and goodies and craft activities as well as the opportunity to sit on the bearded man’s lap and tell him what you want to find under the tree that year. Of course, my son loved every moment of it. But he started to love it even more when one of his best friends from daycare showed up. This was a little Indian kid with whom he was inseparable at the time. And with him was his father who was all smiles and wanting to make chitchat with me.

Since gravitating to the Dissident Right, I’ve been trying to limit my interactions with non-whites as much as possible. Why be friendly with a person whom you would just as soon deport? It is a mask I would simply prefer not to put on. But I can still remember a time when I wasn’t like this. I’ve always felt kind of like an outsider among white people and so, even as late as ten years ago, I would go out of my way to find things in common with foreigners, and that included non-whites. Of course, very few of these relationships ever lasted, but that never deterred me. So when the boy’s father shook my hand and seemed eager to talk, I was tempted to ask him if he was Christian. Why else would an Indian father take his little son to see Santa Claus?

But I didn’t. Fortunately, I was sitting at a table with my laptop, working on an article for Counter-Currents, and he took the hint that I didn’t wish to be disturbed. But later on as I watched the two boys play and run around, I couldn’t help but notice all the non-Christian non-whites who were milling about the store that morning. Women in hijabs, mostly. These were a mix of North African and Middle Eastern Muslims who, along with their children, were ignoring the red, white, and green playfest going on with Santa in the supermarket. Of course, they didn’t care.

This made me consider that, with enough of these people, there would be no Santa playfests at all. Attitudes towards Christmas among these people range from indifferent to outright hostile. Why would they tolerate outsider holiday celebrations? When have they ever done that? Has Santa and his reindeer ever made a stop at Mecca or Medina? Furthermore, how are we going to explain to our credulous children why their friends Muhammad or Abdul do not believe in Santa?

(A similar experience happened during Halloween over a decade ago when a Muslim family in our neighborhood put up a sign on their door which read, “Closed for business.” I guess shelling out thirty bucks for candy and playing along with a perfectly innocent children’s holiday was just too much for these people to bear. Not only that, they had to make this rebuff explicit in writing. They could have simply kept their lights off and no one would have bothered them. But no. And when I voiced my displeasure at this, as well as a lingering grudge over 9-11 and the various Jihadist terrorist attacks which had occurred since, my mostly-white neighbors tried to shush me as if I were the bad guy—a perfect example of how racial diversity encourages whites to select for weakness rather than strength.)

And it’s not just about losing Christmas and Halloween. It’s also about accepting Islam as the new normal. Around the same time, when I went to a Hallmark store in a strip mall, I was shocked to hear Islamic prayer emanating through the walls from the adjacent Middle Eastern restaurant. It was ten o’clock in the morning on a weekday. It was loud, it was amplified, and it was annoying. I didn’t bother bringing this up to the nice young white women working at the Hallmark store since they seemed determined to smile through it all. They’d rather piously declare that Muslim farts smell like roses than ever violate the ‘diversity is our strength’ mantra on which they were raised. After our transaction, I smiled self-consciously at the cashier and rolled my eyes in the in the direction of the prayer, intimating that she could talk about the noise pollution if she wanted to. She didn’t. She told me to have a nice day instead. What I wanted to tell her was that diversity is not our strength. Diversity is their strength. But I didn’t.

Looking back, I wish I had.

As I reflected on how I snubbed that nice Indian man, I wondered if he knew that his very presence in America was threatening the Christmas he was celebrating with his son. He himself may wear red-and-green sweaters and trim a tree in his living room every December, but the waves and waves on non-whites that enter our country along with him do not and will not. Is taking in a tiny subset of foreigners who respect Western traditions enough to adopt them themselves worth ultimately losing these traditions entirely? This is the kind of question that white people should be asking themselves right now.

I understand the many on the Dissident Right are ambivalent about Christmas. Perhaps it’s too commercial or materialistic. Perhaps it’s too Christian or religious. Perhaps. But the fact remains for me that Christmas has produced some of the happiest and most lasting memories from my childhood. I cherish these memories. And it’s not just about receiving gifts under the tree, but also about giving gifts and eating great food and spending time with family and relatives I saw so infrequently. I was—and still am—a sap for all it. Christmas is so ingrained in me and my family that I suspect that European whites would have been celebrating it in a similar way regardless of whether Christianity ever came to Europe.

This is why I get defensive when non-Christians (Jews and Muslims, mostly) attack Christmas or defile it. It’s a part of me, and they wish ultimately to destroy it. They would prefer to live in a world in which jingle bells and ho-ho-ho’s and all the wonderful things about Christmas no longer exist . . . or become drowned out by amplified Islamic prayer emanating through walls.

» The Sexes:
Complementary, Not “Equal”