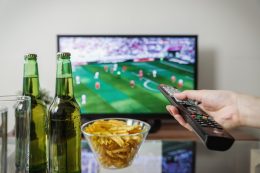 Why do so many whites accept political correctness? Because their lives are too good and they’re too afraid to fight back. If it doesn’t directly affect them, why should they care? These American cattle are grazing the strip mall pastures, mooing at their favorite sports teams.

The epitome of these complacent bovines is Carson King. The 24-year-old Iowa man gained fame for holding up a sign requesting beer money on ESPN’s College Gameday, a popular sports show hosted at the week’s biggest college football game. The anchors were seated outside as dozens of excited young fans stood behind them and held funny signs. King’s sign was a direct beg for money, with a Venmo link prominently displayed, to help him buy Busch Light, a very cheap domestic beer.

King raised quite a bit of money with his sign: one million dollars. He decided to give his money to a children’s hospital, a much better cause than a lifetime supply of Busch Light.

Anheuser-Busch agreed to give him a year’s supply of his favorite beer with his face on each can, along with a sizable donation to the children’s hospital. King’s story was set to be one of those hokey, yet uplifting, stories that ESPN’s audience loves.

Enter cancel culture into the story.

A Des Moines Register reporter found “racist” tweets from King, which were posted when he was only 16 years old. The tweets weren’t even his own creation; they were quotes from the Comedy Central show Tosh.0. King nevertheless claimed the tweets made him “sick” and he issued a groveling apology at a press conference. “I am so embarrassed and stunned to reflect on what I thought was funny when I was 16 years old. I want to sincerely apologize,” he said in his confession.

King said he’s become a better person and his racial views are expressed by this 2016 tweet: “Until we as a people learn that racism and hate are learned behaviors, we won’t get rid of it. Tolerance towards others is the first step.”

King thanked the Des Moines Register for finding his old tweets, and insisted the paper has only been kind to him.

The apology did him no favors with Anheuser-Busch, as the beer giant cut off his year’s supply of Busch Light. But the apology did win him the admiration of conservatives and liberals alike and sparked outrage against the Des Moines Register. Conservatives dug up the Register’s reporter’s old tweets and publicly shamed him. They said this was cancel culture at its worst; King just wanted beer money and helped a kids’ hospital, for God’s sake!

It worked: The Register fired the reporter in order to quell the outrage.

Regardless, Iowa’s Republican Governor announced a Carson King Day on the same day that the controversy broke. The Governor signaled that Iowa wouldn’t cancel one of their own.

Liberals who defended King took a different tack from conservatives. They said his groveling meant he had changed and canceling him would set too tough of a precedent:

If Carson King had been defiant about the two tweets from when he was 16 or doubled down, I would get why the Register would mention them but according the paper, he was deeply remorseful. I fail to see how it was newsworthy, especially given the good work he’s been doing

King even earned the support of the odious Tim Wise:

1/ For anyone curious about my thoughts re: Carson King. I think he said some stupid racist stuff when he was 16. It seems he has no history of that in 7 years since. His apology seems sincere (unlike Shane Gillis’s whose racism is recent). I think he’s probably a good guy…

However, Wise made sure to make an anti-white point about the story:

3/ And honestly (this is to all the right wingers defending him solely bc it allows them to lash out at antiracism more broadly), if the guy w/ the ‘Venmo me some beer money’ sign had been black, how many people ya think would have sent it to him? And how many of YOU would have?

Liberals’ defense of King should dissuade Right-wingers from making him a martyr. King kneeled before them, said he’s very sorry, and thanked his persecutors. Some of the money he raised will probably now go to the Southern Poverty Law Center and the Anti-Defamation League. What better way to show he hates racism?

The Left knows he’s a compliant honky and will do what they say. They need to defend him to uphold the power of cancel culture and its ability to take down those who truly deserve it.

Vox writer Dylan Matthews made this same argument earlier this month. An establishment conservative was (briefly) fired from his administration job for satirizing anti-Semitism. The Left thought it was unwarranted because the conservative demonstrated the proper views and his punishment demonstrated that cancel culture is unjust. Matthews argued this situation needed rectification in order to preserve cancel culture’s power.

Societal norms against explicit bigotry – anti-Semitism, sexism, racism, homophobia, transphobia, and so forth – are important, and indeed the primary means through which marginalized groups obtain a higher status and more equal treatment. Government policy can help, but fundamentally what (insufficient) progress we’ve had against anti-black racism and homophobia in the past 50 years has been driven by the attitudes of individual people in response to societal pressure and changing norms.

But precisely because accusations that a person violated those norms cannot be adjudicated in a court, the only way to provide some kind of protection against false claims is for those of us in the “discourse” to police ourselves, and call out allegations when they go too far.

Sure enough, that cuckservative got his job back.

King’s story and the subsequent backlash strengthens cancel culture rather than weakens it. The people who control cancel culture – liberal journalists – policed the situation and ruled him undeserving of punishment. It shows cancel culture to be tough, but fair – a power that normies can accept and trust. It’s only the real racists who get cancelled; that’s why you should accept the rulings of journalists. You didn’t see this outrage over a Texas teacher losing her job for asking President Trump to enforce his immigration policy. That person deserved to be cancelled, and so does anyone who utters similar views. Only those who apologize and submit to the Left’s rule have a shot at redemption.

Cancel culture and Left-wing cultural dominance persist because of whites like Carson King. King is a nice, normal American. He’s not a criminal or a bad guy, and he was generous enough to raise a million dollars for a children’s hospital. You may even say he’s a model citizen. But he’s also cattle.

This is a grown man who woke up early on a Saturday to hold up a sign requesting beer money on an ESPN show. Most of that audience is supposed to be in college; King is out of college. This was his highest aspiration and something he would’ve cherished for the rest of his life, even if it didn’t become a national story. King’s sad state is expressed by his flabby physique and shabby facial hair. He may have once been an athletic stud, but those days are over. The normie life takes its toll.

King is likely apolitical, but he still posted cringe takes on racism on social media. “Until we as a people learn that racism and hate are learned behaviors, we won’t get rid of it. Tolerance towards others is the first step” is the perfect distillation of Hollywood brainwashing. Only cattle would believe such a thing. Sadly, too many whites think like this. It’s not their fault; every movie they watch and every song they hear tells them the same thing. Racism is bad, man. Let’s just love everybody!

They also know the consequences of heresy. They don’t want to end up unemployed and branded a “racist.” Only the stigma of pedophilia is worse in our society.

We shouldn’t have expected Mr. King to defy the media and declare, “It’s okay to be white!” That would have been too much for a normie, and his tweets were probably vulgar and not easily defended. But his apology and promise to be more anti-racist was too much. His gratitude toward his oppressors was a new low for Midwestern whites. It was similar, but not as bad as the actions of Mollie Tibbetts’ family. The Iowa family forgave their daughter’s illegal immigrant killer and doubled down on their support for mass immigration and anti-racism.

King didn’t demonstrate ethnomasochism, he demonstrated submission – and that’s all the globalists need. They want normal Middle Americans to submit and know they can’t think or say anything too controversial. They should just focus on drinking beer and watching college football like good cattle.

Not all men are called to be heroes, and white societies need people like Carson King to flourish. But he is no model for anyone. He’s a flabby, sad version of what a white man should be. There’s more to life than Busch Light and Iowa State football. Men who aspire for nothing more don’t deserve days in their honor.

But in 2019 America, the weak rather than the strong receive them. American cattle need reassurance that the pasture is all they should dream of.

The Karl Muck Scandal:
A Study in Ethnocentrism »