The Farce of Banned Books Week 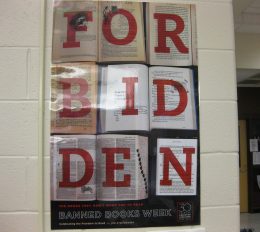 Today is the first day of Banned Books Week, an annual event that purports to celebrate intellectual freedom and First Amendment rights by drawing attention to books that have been banned or challenged. Its organizers claim to be staunch opponents of censorship of all kinds. The American Library Association, for example, claims to promote “the freedom to express one’s opinions even if that opinion might be considered unorthodox or unpopular.” The event has gained lots of traction in secondary schools and colleges across the United States.

This must mean that students all across the country are being encouraged to read Greg Johnson’s White Nationalist Manifesto, right? Alas, this is not the case. In reality, “Banned Books Week” is a misnomer, as virtually all of the books held up as examples of censored literature were merely “challenged,” meaning that a concerned individual (often a parent) requested a local library or school to remove the book in question in order to shield young people from its influence. Books are generally challenged on account of containing profanity, graphic imagery, or mature themes such as sexuality, drugs, and abuse. In 2018, about a third of the initiators of challenges were parents (another third were “patrons,” and thirteen percent fell under the category of “administration”). In the vast majority of cases, these challenges are swiftly swatted away, and nothing happens.

Among the most frequently challenged books of 2018 were Sherman Alexie’s The Absolutely True Diary of a Part-Time Indian, which contains profanity, violence, and references to gambling and underage drinking; Alex Gino’s George, which is about a boy who thinks he is a girl and wants to take estrogen; and Jay Asher’s Thirteen Reasons Why, which deals with teen suicide.

The list of frequently challenged books is fairly representative of the state of modern literature for young people. Most fall under the category of young adult fiction. One notices a shift away from the adventure-loving spirit of classic children’s books like Treasure Island or The Swiss Family Robinson and toward a suffocating sense of interiority and a withdrawal into the self, best represented by the faddish first-person, present-tense style of narration. (The genre of young adult fiction is a recent phenomenon; perhaps its neurotic preoccupations can be attributed to its origins in the modern tendency to prolong childhood.) The plots of such novels generally center around some sort of domestic or personal drama in which the protagonist is somehow victimized, often because of his or her “marginalized” status. Many writers of young adult fiction today believe they have a moral obligation to educate young people on social issues, which results in novels that are heavily politicized or aggressively sexual.

Young adult novels have pride of place in most schools and many public libraries, and the people who challenge them tend to be conservative. So Banned Books Week’s exclusive focus on books stocked in libraries and schools enables liberals to LARP (albeit rather unconvincingly) as oppressed victims and turn a blind eye to the censorship directed against their opponents. They may dominate the establishment and maintain an iron grip over academia, but they are fond of pretending that they are constantly being persecuted by evil fascists and Nazis.

Of course, this could not be further from the truth. There is a world of difference between challenging books and actual censorship. The majority of those who challenge books are parents or other concerned individuals seeking to protect children in their communities from potentially harmful influences. Young people lack the maturity needed to understand what is actually good for them. In an age in which public education has deteriorated to the point that students barely learn anything and are provided with very little intellectual or moral guidance, parents must take on a greater responsibility for their children’s education. This involves supplying them with a diet of literature that inspires and ennobles them, while restricting their access to literature that does the opposite. In healthy communities, people will care about the well-being of the community’s children at large (not just their own), prompting them to demonstrate greater concern regarding the material offered at local schools and libraries.

Some of the challenges are undoubtedly silly. The furor over the picture book about gay penguins is hard to take seriously. Some evangelical Christians have argued that the Harry Potter books promote occultism and devil-worship, which is ironic considering the books’ grounding in Christian morality and biblical themes. (It would be nice if the Harry Potter books were banned, though, because then maybe people would stop talking about them.) But this is all beside the point, which is that one cannot fault parents (and related parties) for taking matters into their own hands given the derelict state of the school system and the degeneracy that prevails in mainstream culture.

Challenging a book is not an attack on free speech itself; no one is attempting to prevent books from actually being published or sold. Liberals oppose the practice not because they are high-minded defenders of free speech, but because such challenges pose a threat – however minor –  to their hegemony. To riff off H. L. Mencken’s famous line about Puritans, they are haunted by the prospect that someone, somewhere out in Kansas might be entertaining a transphobic thought.

The real purpose of Banned Books Week is not to oppose censorship and defend the First Amendment. Would it not be hypocritical for someone to proudly support all forms of freedom and oppose centralized control while simultaneously seeking to dictate the actions of small-town communities? The capacity of communities to manifest their values on a local scale is itself a form of freedom of expression and freedom of association.

Instead, the underlying aim of the campaign is to expose children to degeneracy and to block attempts to prevent this. Indeed, on the front page of the Banned Books Week Website, there is an article promoting storytelling sessions hosted by drag queens: “What better way to celebrate the freedom to read than with drag queens and kids [sic] books?”

This is further underscored by the campaign’s total silence regarding the draconian suppression of Rightist viewpoints. As liberals are fond of saying, silence is complicity.

In the past year alone, Amazon erased seventeen Counter-Currents titles from its Website. Amazon has also banned Jared Taylor’s books and Kevin MacDonald’s Culture of Critique. These are clear-cut cases of censorship: Amazon has actively sought to curtail intellectual freedom and suppress dissenting voices. Its censorship of Rightist authors is a far cry from parents’ efforts (unsuccessful efforts, at that) to remove a particular book from a small-town elementary school or local library. Amazon is the largest bookseller in the world. Where is the outrage over the persecution of Greg Johnson, F. Roger Devlin, James O’Meara, Jared Taylor, Kevin MacDonald, and other Rightist authors deplatformed by Amazon? Why are the organizers of Banned Books Week not demanding that Amazon restock Counter-Currents titles?

YouTube, Facebook, and related sites have banned countless accounts associated with the Dissident Right. PayPal and Patreon have deplatformed several White Nationalist figures. There are very few remaining sites where dissidents can speak their minds freely.

The founder of Banned Books Week, Judith Krug, was a Jewish free speech activist who opposed the Communications Decency Act of 1996 on the grounds that all forms of Internet censorship violated the First Amendment. Few people back then could have predicted that the Internet would become the Dissident Right’s greatest asset in the twenty-first century. Today, Krug’s extreme opposition to censorship would be regarded with some amount of suspicion. Now that Leftists’ views have become hegemonic, defending free speech without reservation no longer benefits them.

Pointing out the hypocrisy of Banned Books Week goes a long way. Ideally, though, people would not have to find themselves challenging books on behalf of young people in the first place. This would entail retaking control over public education and challenging Leftist cultural dominance – in short, metapolitics.

Celebrate Banned Books Week by buying one of Counter-Currents‘ titles banned by Amazon.com: