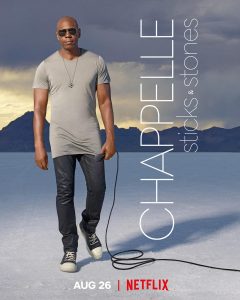 Chappelle’s Show (2003-2006) is a favorite of many Right-wingers for its politically incorrect humor and, in particular, its irreverent attitude towards race. (It is right up there with Curb Your Enthusiasm in the estimation of many of my friends.) Only thirteen years have passed since the demise of Chappelle’s Show, but the world has changed a lot since then. The pole up the butt of the Left has now expanded to Giant Redwood dimensions. The list of things that cannot be said now runs into several volumes. Not much is funny anymore, least of all comedy.

Yes, the world has changed – but not Dave Chappelle, whose most recent Netflix special, released on August 26, is essentially a giant “FUCK YOU!” to political correctness. (Townhall accurately described Chappelle as “The Middle Finger America Needs.”) It’s a 65-minute standup routine in which Chappelle impales one sacred cow after another, leaving a forest of rotting carcasses that would earn the admiration of Vlad Țepeș. It is obvious that the man is disgusted at what has become of the country and, especially, of the entertainment industry. He delights in the destruction he brings. Chappelle aggressively refuses to be PC, to spare anyone or anything from his wit. He also challenges his audience to grow the hell up. The very title of the special implies this: Sticks and Stones, as in “Sticks and stones may break my bones, but names can never hurt me.” Stop getting your knickers in a twist over words, you sniveling brats!

At one point Chappelle announces that he is going to do an impression, asking the audience to guess who it is. He then adopts a vapid look and a dumb and dumber voice:

Uh, duh. Hey! Durr! If you do anything wrong in your life, duh, and I find out about it, I’m gonna try to take everything away from you, and I don’t care when I find out. Could be today, tomorrow, fifteen, twenty years from now. If I find out, you’re fucking-duh-finished.

When the audience fails to guess who Chappelle is imitating, he announces “That’s you! That’s what the audience sounds like to me. That’s why I don’t be coming out doing comedy all the time, ’cause y’all niggas is the worst motherfuckers I’ve ever tried to entertain in my fucking life.”

Having now skewered (apparently) the “#metoo movement” and “doxing” of all sorts, Chappelle goes on to proudly identify as what he calls a “victim blamer.” He explains this with the following examples: “If somebody come up to me like, ‘Dave, Dave, Chris Brown just beat up Rihanna!’ I’ll be like, ‘Well, what did she do?’ ‘Dave, Michael Jackson was molesting children!’ I’ll be like, ‘Well, what were those kids wearing at the time?’” An entire segment of the special, in fact, is devoted to saying the unsayable concerning pedophilia. (It’s the most irreverent thing I’ve seen since the Brass Eye “Paedogeddon” special from 2001.)

I know more than half the people in this room have been molested in their lives. But it wasn’t no goddamn Michael Jackson, was it? This kid got his dick sucked by the King of Pop. All we get is awkward Thanksgivings for the rest of our lives. You know how good it must’ve felt to go to school the next day after that shit? “Hey, Billy, how was your weekend?” “How was my weekend!? Michael Jackson sucked my dick! And that was my first sexual experience. If I’m starting here, then the sky’s the limit!”

Now, I was laughing my head off at this, but that’s not because I think pedophilia is morally permissible. And Dave Chappelle doesn’t think it is, either. It is just such a pleasure to hear a comedian being wicked again. Comedians are supposed to be irreverent. They are supposed to have little or no respect for boundaries. A comedian who bows before the altar of political correctness is like a philosopher who refuses to question church doctrine: a pathetic sight, a castrato. Come to think of it, in fact, comedy really is a bit like philosophy. Just as philosophy can have no boundaries – philosophers must be free to question literally everything – so a comedian must be free to ridicule literally everything.

And, like philosophy, comedy reveals truth. So, while we can agree that Michael Jackson’s pedophilia cannot be condoned, it’s also true that meeting Michael Jackson really wasn’t the worst thing that ever happened to those kids. Chappelle dares to say this. And he dares to say much else. A good deal of his humor is directed at the LBGTQ crowd (did I forget any letters?) – who he refers to as “the alphabet people.” But I’m not going to get into that, just because I don’t want to spoil the show for those who haven’t watched it yet. (I’ve already revealed too much.) This show is a goldmine of un-PC humor. And half the fun is thinking about all the butthurt it has caused in all the right people.

Indeed, the response has been absolutely predictable. The discrepancy between the audience response and the response of professional critics has already been the subject of news coverage. On Rotten Tomatoes a whopping 99% of audience members (i.e, non-critics) rated it positively. Initially, 0% (yes, you read that right – zero percent) of critics gave Chappelle a favorable review. This figure eventually creaked up to 17% and has now peaked at a measly 27%. Fifteen critics are included in this survey, whereas more than 34,000 non-critics weighed in.

Writing for The Atlantic, someone named Hannah Giorgis says, “Sticks and Stones registers as a temper tantrum, the product of a man who wants it all – money, fame, influence – without much having to answer to anyone.” (Hannah is a woman of color with Roseanne Roseannadanna hair who looks like she just turned 21, and whose qualifications as a film critic are, shall we say, dubious.) “Sticks & Stones exists as a defiant design to intentionally offend large swaths of the audience Chappelle deems too thin-skinned and easily outraged, while serving up simple, low-bar yucks to anyone yearning for validation of their anti-P.C. stance.” This breathless mouthful comes from Melanie McFarland of Salon. Both Hannah and Melanie, by the way, have managed to achieve the status of “top critics” at Rotten Tomatoes.

“Author” and “transgender activist” Ian Thomas Malone opines, “Lacking empathy can certainly be amusing, but Sticks & Stones is a tired routine by a man who forgot to layer jokes into his act, too often sounding like a pundit on Fox News.” Allison Herman of The Ringer warns, “It’s a symbiotic cycle with no end in sight.” Right. Whatever the fuck that means. A few critics and media figures have been more positive. Probably the best tweet so far has come from American Psycho author Brett Easton Ellis: “Did I just watch Dave Chappelle save America from itself in 65 minutes on Netflix?” And a number of Chappelle’s fellow comedians have come to his defense.

The contrast between the comments of critics and those of ordinary folks could not be more striking. Here’s a sampling of what the ordinary folks posted:

Funny stuff from Dave Chappelle. I think the critics don’t know the meaning of sticks and stones.

Hilarious and brilliant. Don’t pay attention to the critics’ reviews.

Quite possibly the Best Stand Up of the last 25 years. What real comedy looks like and should be.

HILARIOUS! Anti PC for people that don’t know what “comedy” means. Something the culture needed.

Absolutely amazing! Perfect timing for what has slowly but surely become a clown world. Chappelle is dropping truth bombs left and right, and the critical score shows that, truly, the critics do not even understand the title of “Sticks & Stones.” Everyone needs to not only watch this but understand it. Dave, we love you!

All great comics through history have been subversive. They are at the front line of speaking truth to power. The mainstream progressives have become the censorious church lady of the past. They are religiously possessed by political correctness.

It’s hard to imagine a better illustration of how out of touch professional, PC critics are with audiences. And it’s also hard to imagine how one could need any more proof that such “writers” are given a platform precisely because they have passed a political litmus test, and precisely in order to push a political agenda. It’s a desiccated, humorless, tired agenda of which ordinary people have clearly had enough. And they are more and more willing to stand up and say so. They are also voting with their feet: tuning out and turning off TV shows and channels heavy with PC bias.

Dave Chappelle’s Sticks and Stones is one of the most heartening hours of television I’ve seen in a long time. Watch it (without delay) and you’ll see what I mean. I would like to appoint Dave Chappelle as Counter-Currents’ Honorary White Man of 2019, or any year.