So screamed MDC on their 1982 song, “Corporate Deathburger.” The hardcore punk band aimed its vitriol at McDonald’s, yelling that the multinational corporation starves third world children and delivers crappy food.

The lyrics typified the leftism espoused by MDC (which stood for Millions of Dead Cops on the first album) and other “anti-fascists.” The band also called John Wayne a Nazi and, naturally, supported killing cops. The anti-corporate stance fit well with the whole package.

The tweet invited Scottish leftists to throw Burger King milkshakes on Nigel Farage and other Brexit supporters. Milkshaking right-wingers has become a fad in the U.K.; both Tommy Robinson and Sargon of Akkad have experienced the dairy dousal. Farage was in Scotland for the weekend and one local McDonald’s was advised by police to not sell milkshakes during his trip.

Burger King took the opposite approach.

The corporate giant’s account tried to play off the tweet as a benign advertisement of milkshakes and said it would never endorse political violence. However, the account’s own likes indicated it was an endorsement of violence against Farage and other Brexiters.

Sure enough, Farage was hit with a milkshake on Monday. It occurred in England rather than Scotland, but the press cheered it on just the same. The Independent said it wasn’t “funny, it’s absolutely hilarious.” The New Statesman insisted milkshaking is not violence but hate speech is. Other publications also made light of the assault and covered it as a justified act.

The bizarre celebration of antifa tactics from a multinational corporation is typical of our age. No longer can MDC’s message be rebellious when it’s endorsed by the establishment. Burger King and other corporate giants don’t see antifa as a threat to their interests. They know the anarchism espoused by the black bloc isn’t serious. Antifa will never gain serious power, and they primarily serve as rottweilers against genuine threats to the establishment.

Antifa continue to receive glowing coverage from corporate media. Multiple reporters work closely with antifascists and some even pay them for information.

Leftists are fine with their corporate endorsement. One left-wing Twitter user tweeted this image without any hint of self-awareness: 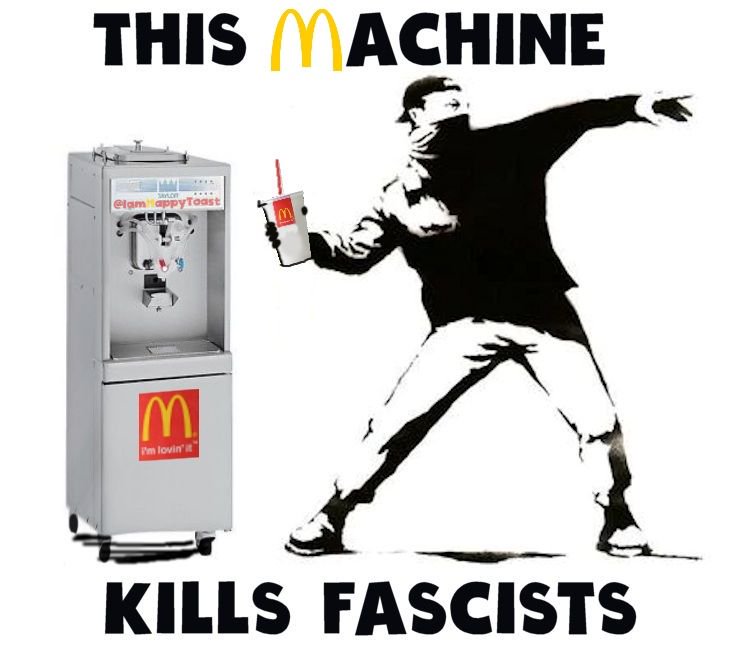 That tweet earned hundreds of retweets and likes. Antifa violence, brought to you by multinational corporations!

The far Left is not a dangerous movement to the established order. You will not lose your job over membership in the Democratic Socialists of America (DSA). You may get to run a corporation’s social media for thanks to that association. You can regularly call for violence, even offer terrorist training manuals, and still remain on Facebook so long as you’re Left-wing.

There have been times in the past when radical Leftists posed some threat to the establishment. The 1999 WTO protests in Seattle is one such example. Left-wingers, some of whom would count as antifa, staged violent demonstrations against globalism and drew a vicious police response. The protests were serious, dangerous, and presented a grand Left-wing coalition against corporate power. Labor unions marched with crust punks against globalism. It was not some freak show to demand free gender reassignment surgeries. This was a massive demonstration against the establishment and its economic system.

Fast forward 20 years. Now globalism is an “anti-Semitic” dog whistle. Left-wing demonstrations against corporations hardly ever happen in the Anglosphere. Union members are seen as racist, misogynistic Trump supporters by the black bloc. The DSA is composed entirely of creative class professionals from privileged backgrounds. They are hardly the union toughs who supported socialism in the past.

Most Left-wing activism is dedicated to exposing and attacking “racists” — not mega corporations. The far Left has made it clear who it considers the real enemy. It ain’t globalism.

This focus makes Leftists useful pawns to global capital. Antifa is dedicated solely to the destruction of another radical political group. It does not advance its own political objectives when it doxes an Applebee’s assistant manager or tries to shut down an American Renaissance conference. Capitalism remains unaffected, and the establishment thanks the anarchists for their service.

The gig economy and the massive power of tech giants should all matter more than random shitposters. Yet, the Left is helpless when faced with corporate dominance.

Corporations themselves do as much to push woke agenda items. They celebrate pride month, put interracial couples in their ads, issue anti-Trump and pro-immigrant statements, and always insist on their commitment to diversity and inclusion. Celebrating violence against the Right has now been added to the list.

The only woke items they won’t support is radical redistribution of wealth and government intervention into the economy. Fortunately for corporations, Left-wing activists are too busy doxing Right-wingers to effectively fight for those causes.

Antifa and DSA members can claim they fight the power all they want. At the end of the day, they’re merely foot soldiers for Big Business. If they were truly a threat, they would be just as censored and ostracized as the Dissident Right. Instead, they advise tech giants on who should be persecuted next.

It’s just a matter of time until the next Burger King ad blasts Corporate Deathburger.

« The Modern Prophecy in the Final Episode of Game of Thrones