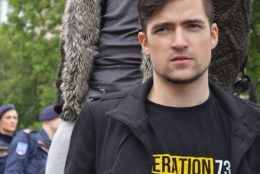 Both governments are seen by many Identitarians as models for nationalist governance, Poland in particular. Yet the recent actions of these governments cast doubt on that impression.

The German-speaking offshoot of Generation Identitaire, Identitarian Movement (IB), has recently become public enemy number one. After it was revealed IB had received a donation from the Christchurch shooter, the group was hit with a terrorism investigation, and leaders’ houses were raided. That investigation is led by Left-wing prosecutors in Graz, but conservatives in power are doing little to halt this miscarriage of justice.

Austrian Chancellor Sebastian Kurz has said the government may ban IB over this one donation. “Our position is very clear,” Kurz said last month. “No form of extremism must be allowed to have a place in our society, whether it be radical Islamists or rightwing fanatics.”

His opinion was echoed by his nationalist vice chancellor, Heinz-Christian Strache. “Any connection to the brutish murders in Christchurch has to be ruthlessly cleared up,” the Freedom Party leader stated. He added, “The Freedom party has nothing to do with the Identitarians.”

In 2016, Strache had defended identitarians as “young activists from a non-leftwing civil society.” Now he and his party want them excised from Austrian society. Strache blocked Identitarian leader Martin Sellner on Twitter and continues to condemn the patriotic movement. Sadly, most of his party has followed his lead.

The Upper Austrian state government voted to will bar anyone associated with IB from state employment. Both conservatives and nationalists voted in favor of the measure to punish anyone who may have ever liked an IB post.

FPO Transportation Minister Norbert Hofer, who nearly became president in 2017, says the Identitarians need to be isolated from polite society and declared he would never have a beer with Sellner.

It’s odd that a party which pursues and champions Identitarian policies would seek to ban actual Identitiarians from the government and society.

Austrian Interior Minister Herbert Kickl is a notable exception to FPO cucking. Kickl argued there is no direct link between the identitarians and the Christchurch shooter. He himself is currently fire for speaking at an Identitarian event in 2016, where he said they are “like-minded people.” That act prompted Kurz to strip Kickl of his oversight of Austria’s intelligence services. “Far-Right extremism has no place in any political party,” Kurz declared last week. “Any sort of involvement with the Identitarians must stop. Looking away is not an option.”

The FPO used to stand up for the Identitarians. When IB was prosecuted as a “criminal organization,” FPO leaders condemned the prosecution as ridiculous. “The activities of the Identitarians seem very similar to those of organizations like Greenpeace. If that standard is to be maintained, then most likely many organizations would have to be criminally charged, and democracy cannot endure that,” FPO justice spokesman Harald Stefan said last May.

But the one donation has seemingly changed the FPO’s stance. Identitarians are now dangerous extremists in the party’s eyes. This virtue signaling is done to placate Kurz and his party, which makes the FPO appear as the weaker party.

The conservatives and supposed nationalists of the FPO attack the Identitiarians to bolster their anti-extremism credentials. It’s similar to the ruling Law and Justice Party’s strategy in Based Poland.

American Renaissance founder Jared Taylor was banned from Europe at Poland’s request last month. This request may have been made over talks Mr. Taylor delivered in Poland earlier this year. He had spoken in Poland last September without incident, but his talks in February drew the scrutiny of Polish police. Authorities told the organizer of the February event that that the gentlemanly race realist spreads “a totalitarian ideology” and the organizer would be held responsible for Taylor’s scary speech.

The group had to change venues for both talks to avoid police harassment. Taylor left Poland without any problems. His return to Europe in late March–to speak at the Scandza Forum in Sweden–was blocked in Zurich. There he was informed he has a three-year ban from the Schengen area thanks to Poland and was deported back to America.

Right-wing Swedish activist Jonas Nilsson was banned from Poland in 2018. Richard Spencer was banned from the Schengen area by Poland in 2017. The Polish foreign ministry claimed Spencer’s views “pose a threat to all those who hold dear the values of human rights and democracy” and “are in conflict with the legal order” of Poland.

Conservative foreign minister Witold Waszczykowski stated that Spencer “should not appear publicly, and especially not in Poland.” Waszczykowski has fully supported Poland’s resistance against migrant acceptance and once said “no state has the duty to accept immigrants.”

His party, the Law and Justice Party (PiS), has a complicated relationship with its own nationalists. PiS appeals to the “far-Right” when it comes election time but always makes a point to condemn their extremism.

PiS’s relationship with the nationalists’ famed Independence Day rally illustrates this tension. International media whined that the 2017 rally featured signs that warned of white genocide and expressed racial pride. PiS leaders were quick to condemn these expressions while delivering qualified praise of the rally.

Yet, PiS still supports the nationalist-led Independence day rally. Last year, the party was instrumental in overturning Warsaw’s ban on the march. PiS parliamentary caucus deputy chief Tadeusz Cymanski explained to Reuters his party’s strategy on nationalists. According to Cymanski, the party wishes these Right-wing groups would not have representation in parliament and views them with contempt. However, the party realizes nationalists represent a vital constituency and they must be appealed to.

“It is in the interest of democracy, in the interest of our state that extreme groups, either left or right-wing, have no representation in parliament,” Cymanski told Reuters in 2018. “Any association [of nationalist groups with PiS] is painful and unpleasant, I reject it with shame, but I think it would be better even if I, or my faction, were associated with them rather than these forces were to gain in force.”

The National Radical Camp (ONR) has no parliamentary representation in spite of its large rallies and substantial influence. This is due largely to PiS’s tough stance on immigration and implicit defense of Polish homogeneity. ONR’s leaders admit the ruling party has copied their rhetoric and they seem pleased by it.

Unlike in Austria, Polish conservatives don’t want to ban or suppress their own nationalists. They merely want them out of power, contained and not expressing rhetoric that embarrasses Poland in the eyes of globalists. At the same time, PiS does not want foreign Identitarians and nationalists to visit and speak in their country.

Poland’s migration policy is commendable but its government is not the ideal some nationalists think it is. Poland is still heavily dependent on the European Union and America and maintains a careful balancing act to retain that support. This balancing act apparently requires condemnation of nationalist rhetoric and the banning of identitarians.

A more extreme example of the “suppress nationalists/adopt nationalist rhetoric” is seen in Vladimir Putin’s Russia. Putin has sent numerous nationalists to jail and banned multiple groups while proclaiming himself a nationalist. Nationalists have been imprisoned for such offenses as carrying banners that read, “Russian power in Russia.” That apparently counts as spreading “extremism” in Russia. In the 2000s, Putin suppressed the ethno-nationalist Rodina party because it incited “racial hatred.” The real reason for the suppression was Rodina’s threat to Putin’s United Russia Party.

While Putin’s government harasses nationalists and jails them, it still relies on them to support the regime. Nationalist groups were instrumental to the organization of rallies for Russia’s National Unity Day and provided many of the fighters for the war in Donbass. However, those groups that organized the National Unity Day–the Movement Against Illegal Immigration and Slavic Union–are both currently banned and their leaders in jail or in exile.

Putin has created or subverted several nationalist groups to act as controlled opposition and reaffirm his power. This includes the Liberal Democratic Party, which is the third largest party in Russia. Those that don’t fall in line suffer the fate of the Slavic Union.

Other Eastern European conservatives with power have a similar relationship with their Right-wing opponents. Hungarian Prime Minister Viktor Orban’s government has taken suppresionary actions against the nationalist Jobbik party while adopting many of its policies. In some ways, Orban’s Fidesz has moved to the Right of Jobbik. Ukraine’s conservative government faces mounting pressure to suppress their ultranationalists, even though these patriots have led the fight against Russian separatists.

Nationalists in Western Europe face ostracism from their center-Right countrymen. Conservative candidate Francois Fillon endorsed Emmanuel Macron in the 2017 French presidential election following his elimination. Even though he had copied much of the rhetoric and policies of Marine Le Pen, he could not endorse her. “The National Front, the party created by Jean-Marie Le Pen, has a history known for its violence, its intolerance. Its economic and social program would lead France to bankruptcy and, to that chaos, you would have to add the European chaos of exiting from the euro,” Fillon said. “I assure you: Extremism can bring only misery and division to France. So, there is no option but to vote against the extreme Right I will, therefore, vote for Emmanuel Macron.”

Popular nationalist parties like the Sweden Democrats, Alternative for Germany, and Vlaams Belang are explicitly kept out of center-Right coalitions. Besides the FPO, the only nationalist parties to join in government coalitions are the Danish People’s Party and Italy’s Lega. Lega’s coalition partners are not conservatives but the populist Five Star Movement. Arguably, the Italian nationalists have been the most successful in exploiting their situation and has implemented solid immigration and cultural policies. Lega has also not been forced to disavow or persecute fellow nationalists.

A few folks on the Dissident Right look to the Italian coalition as a model for other nationalists. Instead of the center-Right, they say we should ally with Left-wing populists. However, Italy is a unique situation that cannot be replicated in other countries. The Five Star Movement is amorphous and based primarily on outrage against corrupt elites. It isn’t really ideological, which allows it to work with national populists. The same can be said for the Yellow Vests in France. But all other westerns Leftists see nationalists as a greater enemy than the establishment and would never work with us.

Whether nationalists make coalitions with center-Right cucks or amorphous populists, they should see the Freedom Party as a warning. When you let yourself be dominated by your coalition partner, you end up sacrificing your own.

Austria and Poland are both advancing in a positive direction, but neither government is going to be the West’s savior. Identitarians still need to build our own institutions, advance our own ideas, and enact our own agenda. We cannot trust conservatives, no matter how sympathetic they may seem, to conserve our civilization.

« Lobster Man Bad:
A Reply to Jordan Peterson Regarding Nationalism

» Video of the Day
A Recently Rediscovered Speech by Jonathan Bowden!
The Essence of the Right