Afro-Saxon Britain: All is True 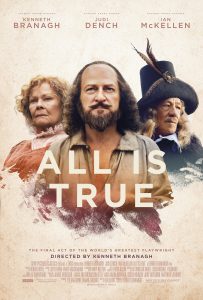 “To bait fish withal. If it will feed nothing else, it will feed my revenge. He hath disgraced me and hindered me half a million, laughed at my losses, mocked at my gains, scorned my nation, thwarted my bargains, cooled my friends, heated mine enemies – and what’s his reason? I am a Jew. Hath not a Jew eyes? Hath not a Jew hands, organs, dimensions, senses, affections, passions? Fed with the same food, hurt with the same weapons, subject to the same diseases, healed by the same means, warmed and cooled by the same winter and summer as a Christian is? If you prick us, do we not bleed? If you tickle us, do we not laugh? If you poison us, do we not die? And if you wrong us, shall we not revenge? If we are like you in the rest, we will resemble you in that. If a Jew wrong a Christian, what is his humility? Revenge. If a Christian wrong a Jew, what should his sufferance be by Christian example? Why, revenge. The villainy you teach me I will execute – and it shall go hard but I will better the instruction.”

And it was with those words – conjured by a man of unrivalled literary and insightful genius – resounding in my mind that I bought my ticket with a deep sense of trepidation and proceeded to enter the dark auditorium to watch this fictional biography of William Shakespeare’s latter years, All is True. The omens were, I must confess, bleak and ominous, for although Kenneth Branagh, the movie’s director and star, had made a fist of Henry V (1989), he had also been responsible for the multiracial propaganda that was his oversexualized Othello (1996), starring Laurence Fishburne as the only negro in the Venetian army, Love’s Labour’s Lost (1995), and As You Like It (2006). And to rub that extra tang of crusty sea-salt into the open wound in my poor, aching soul, he was once Emma Thompson’s partner, a compulsive virtue-signaller and anti-white male obsessive, whose every public utterance seems to be laced with incandescent fury over so-called white privilege and the addictive need to exalt the talents of melanin-imbued people over indigenous Europeans at every opportunity.

To this was added the writer, one (((Ben Elton))), a lapsed comedian who formerly traded in the easy humor of the anti-Thatcher variety who has now turned to serious screenplays. Then there is the rest of the cast: Ian McKellen, who played a memorable Gandalf in Peter Jackson’s Lord of the Rings trilogy and rendered a fantastic performance as an aging Sherlock Holmes in Mr. Holmes (2015), but who is a committed gay rights advocate and Stonewall activist, here playing Shakespeare’s bewigged homosexual love interest in the form of the Earl of Southampton; Dame Judi Dench, who, despite enjoying a number of career triumphs, sullied her thespian reputation in the vomit-inducing Victoria and Abdul (2017), in which we learned that Queen Victoria’s closest confidante was an Indian Muslim; and the power-girl duo of Lydia Wilson, a graduate of the Royal Academy of Dramatic Arts, and Katharine Wilder, (((Gene Wilder)))’s daughter, playing Shakespeare’s daughters, Susanna and Judith. Lydia Wilson made her name in the stage production Blasted, and Katharine Wilder in yet another remake of the Murder on the Orient Express (2017).

As I reclined into my velvet-cushioned seat in the vaulted canopy of the 4D cinema of a small provincial town, and the fire-red curtain swept aside before me like a Spanish flamenco dancer’s pleated skirt, my concerns were not eased by the usual adverts for sofa beds featuring biracial couples (invariably a black man and a white woman); the credit card sales pitch performed by a black rapper; the “We are not an island” monologue brought to us by HSBC bank; and the travesty of the British Airways centenary campaign starring the grovelling and unshaven Gary Oldman, still desperately trying to make amends for his “Jews control Hollywood” comments from a few years ago. The latter advert glorifies every kind of perversion and abomination of ethnic interbreeding, extolling the virtues of single parenthood, obesity, the gay lifestyle, transsexuality, and the saint-like Windrush Generation of West Indian immigrants – all of whom, unbeknownst to hardworking Brits and taxpayers like myself, have apparently made Britain a better place to live.

This was of course followed by the trailers for forthcoming releases like The Favourite, featuring negroes in periwigs dancing with countesses in Restoration balls; Mary Queen of Scots, starring a Trinidadian who advises the Queen on Tudor England’s constitutional law and a transvestite who shares the Queen’s bedchambers; Green Book, with the inevitable Magic Negro and gauche white sidekick; and invariably, any movie, TV series, or game show that can possibly propel black actor Idris Elba into the role of that suave, sophisticated lady-killer, James Bond.

Image after image, and story after story, made a mockery of actual history, and remade the past as those who now control the media would have us believe the world of our ancestors was really like. We are in a truly Orwellian situation, where The Truman Show happens every day, and where songwriters like (((Marc Shaiman))) disfigure the original lyrics of familiar tunes so beloved by the children of yesteryear to accommodate negroes as chimney sweeps and milkmen walking the c’or blimey cobbled streets of Ol’ London Town, as he did in Mary Poppins Returns (2018).

Finally, the main feature began, with the colossus of world literature, the Bard of Avon, standing before the apocalyptic vision of his beloved Globe Theatre in flames. This was no doubt a precursor to what we can anticipate seeing more of in the coming decades, as the proportion of non-white migrants funnelled into Ol’ Blighty brings open warfare onto the streets around Bow Bells. The destruction of a cultural symbol such as The Globe, so beloved of (((Sam Wanamaker))), who championed its reconstruction, was no doubt intended to be symbolic of the decline of male patriarchy, or, if one stretches the metaphor only slightly further, Western civilization as a whole. A broken man, who we discover is Shakespeare – old and balding, head bowed – is seen reminiscing about the difficulties of working with such famed players as Richard Burbage, Will Kempe, Henry Condell, and John Heminges. “Avonian Willie,” as the Drury Lane actor David Garrick called him, cuts a lonely and forlorn figure as he rides back to Stratford on a black horse.

Arriving home, naturally he is greeted by a clichéd, twenty-first century soap opera dysfunctional family, still bearing the scars of the tragic death of Hamnet, the only son of William and his illiterate wife, Anne Hathaway, at age 11. William is later to learn that Hamnet was not the author of the little rhymes and jests that he held so dear, and that he had in fact committed suicide rather than risk earning his father’s contempt. Judith, Hamnet’s fraternal twin sister and the real composer of the ditties, threatens to tell their father the truth during some sibling squabble with her sister Susanna.

There is also a subplot which strongly hints that Shakespeare, the creator of such rounded and positive female roles as Katherine in The Taming of the Shrew and Miranda in The Tempest, was a typical misogynist, talking about how Judith is pretty and needs to marry and have children. This further inflames the feisty wench against her father and stirs deep dispute between the playwright and his talented, but forever hamstrung, daughter, who by virtue of being a woman in Merrie England can never amount to very much. Likewise, Susanna is unhappily married, and through some convolutions of the narrative which weave a few historical facts into its mostly fictional plot, is accused of sexual misconduct with a local tradesman. This is a scandal that requires the intervention of the wise wordsmith, who by means of subterfuge manages to scare off Susanna’s accuser, who thus loses the case by default. Shakespeare achieves this by warning the tradesman that the Bard has dangerous friends who wouldn’t take kindly to his name being brought into disrepute.

This is a turn that of events that allows (((Elton))) to inject the face of a particularly unattractive black man into the film – in a most dreadfully unflattering close-up – to read a passage about revenge from Titus Andronicus, which he does very poorly indeed:

I am Revenge: sent from the infernal kingdom,
To ease the gnawing vulture of thy mind,
By working wreakful vengeance on thy foes.
Come down, and welcome me to this world’s light;
Confer with me of murder and of death:

There’s not a hollow cave or lurking-place,
No vast obscurity or misty vale,
Where bloody murder or detested rape
Can couch for fear, but I will find them out;
And in their ears tell them my dreadful name,
Revenge, which makes the foul offender quake.

This scene is matched in its utter awfulness only by one featuring Ian McKellen, playing the Royalist Fop, the Earl of Southampton, who is held to have been the “fair youth” of some of Shakespeare’s sonnets by those who interpret them as unashamedly homoerotic. The Earl rides into town like some cavalier from the court of Charles I and disturbs the poet, who by now is seeking daily solace by planting a herb and knot garden under the watchful eye of his frigid farm wife and the neighbor’s playful dog.

A private meeting then follows, with the two sitting face-to-face before a shadow-festooned open fireplace. Their stilted conversation before the crackling flames is filled with innuendos of unrequited love and class differences. Shakespeare, probably the finest and most articulate man ever to have written in the English language, is here reduced to a babbling wreck, spouting dialogue containing quotations from his poems in an arch manner more suited to bawdy vaudeville than sixteenth-century Elizabethan England.

In this depiction, Africans walk the straw-filled streets of rustic provincial towns and flash their white-toothed smiles at weddings as honored guests. This is indeed how the crowd scenes are shot, with a melange of multicultural faces banging leather-skinned drums, playing spinets and lutes, and japing merrily in taverns across the length and breadth of the land. After all, Cheddar Man was dark-skinned, was he not? The Roman legions that invaded Britain under Julius Caesar and Claudius were largely composed of African troopers – or at least that was what I saw in the recent (((Zoe Wanamaker)))-influenced TV series Britannia, where there were whole armies of Afro-Saxons advising Alfred the Great on how to build Burh towns like Wareham in Dorset, Exeter in Devon, Winchester in Hampshire, and York in the north of the country, in order to fight off the marauding Viking invaders.

So why not a black James Bond? We already have a mulatto princess! And soon we will have our own half-blood prince, as predicted in the Harry Potter books and films. Which brings me back to Emma Thompson and the painful memories of watching a black man play Hamlet, realizing that there truly is “something rotten in the state of Denmark.”

Our revels now are ended. These our actors,
As I foretold you, were all spirits, and
Are melted into air, into thin air;
And, like the baseless fabric of this vision,
The cloud-capped towers, the gorgeous palaces,
The solemn temples, the great globe itself,
Yea, all which it inherit, shall dissolve;
And, like this insubstantial pageant faded,
Leave not a rack behind. We are such stuff
As dreams are made on, and our little life
Is rounded with a sleep.