The Perspective of the Helpless 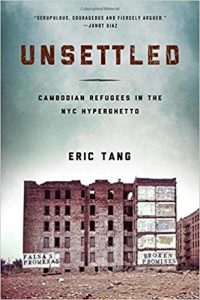 Eric Tang, the community organizer and professor who wrote this book, uses the buzzwords of the non-white/snowflake view of the world. American whites commit “violences” (sic) against “people of color,” and there is also “racialization and gendering” of the Cambodian refugees. There’s all the shibboleths that were used in President Obama’s weepy second-term town hall meetings.

In terms of religion, Cambodia is Theravada Buddhist. This sect of Buddhism “is intensely introspective. The goal is not to improve society or redeem one’s fellow men; it is self-cultivation, in the nihilistic sense of the demolition of the individual.”[1] This worldview lends itself to doing away with worldly possessions. The Khmer Rouge thus viewed and applied Communism through the lens of Theravada Buddhism. As a result, when they ordered the population of Phnom Penh – then roughly the size of Chicago – to move out of the city into a classless, cashless system of collective farms, the people left their houses and started walking into the jungle. Cambodian minds were pre-programmed to accept Theravada Buddhist-style policies.

Towards the end of the Vietnam War, the Americans bombed the eastern fringes of Cambodia, into which North Vietnam’s Ho Chi Minh Trail stretched. This helped to destabilize Cambodia to the point that the Khmer Rouge could take over. Some have thus blamed America for the Khmer Rouge disaster, which is unfair. In fact, Cambodian society was already quite brutal even before their takeover. “Every atrocity the Khmers Rouges ever committed,” Philip Short has written, “and many they did not, can be found depicted on the stone friezes of Angkor.” (Angkor Wat is nine hundred years old.) To further emphasize Cambodia’s brutality, he points out that when Pol Pot was still in France, it was common for boys to find severed heads in the rivers and waterways of Cambodia. With this in mind, the words of Cambodia’s gloomy national anthem during the Khmer Rouge period take on a dark, prophetic meaning:

Eric Tang‘s perspective in this book is so far outside the American mainstream that he views the Obama administration as having been heartless towards refugees, while many on the Right viewed that era as a deliberate policy of race replacement. Nevertheless, there is a great deal of truth in this book. Tang argues that housing the refugees in the New York City hyperghetto brought an end to the arson epidemic that followed the black insurrection. Properties in New York City’s Africanized places following the “civil rights” movement had become huge burdens for their owners. When the Cambodians arrived, the landlords began receiving rent payments directly from the government. The landlords didn’t fix anything, the Cambodians didn’t complain, and the properties became solvent. Indeed, Ron Unz has argued that immigration has been used to move blacks prone to crime out of valuable real estate areas. But unfortunately for white interests, it is merely taking one type of poison to flush out another.

» An Esoteric Commentary on the Volsung Saga, Part VII