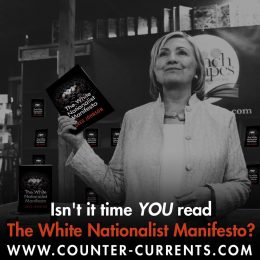 First a brief update on our 2018 Fundraiser, then our November Newsletter.

The grant was offered over this past weekend. Thus far, we are $2,650 toward meeting that grant. Which means that we have $2,350 to raise before the end of the year, at which point our matching donor will put us over the finish line.

November was another strong month for Counter-Currents. We added 65 pieces to our webzine and more than 30 pieces to our YouTube channel. I also appeared on three YouTube shows and gave two lectures, one in the Netherlands for Erkenbrand, the other at a private gathering somewhere in central Europe. But most of my attention was focused on promoting The White Nationalist Manifesto. Our top 20 articles and full stats are below.