Zwarte Piet:
The Face of National Resistance in The Netherlands 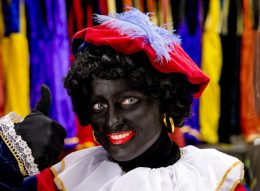 In The Netherlands we have an annual tradition called Sinterklaas, which is a colloquial expression that signifies the celebration of a Christmas-like holiday named after St. Nicholas, a Byzantine bishop and saint from Anatolia, famous for his charity to children. The actual roots of the holiday go farther back to pagan traditions celebrating Yule and the coming of winter. The fatherly, horse-riding saints and the bearded Father Christmas with his sleigh are, in the end, all Christianized versions of Odin. Nordic and Germanic countries generally all celebrate this Odin-like figure and his holiday, of which Christmas is one, Sinterklaas another, and Krampus a third. In the same vein, Sinterklaas is also connected to the Austrian Krampus celebration. Both Sinterklaas and Krampus feature a bearded bishop accompanied by servants who bring gifts to children. In Krampus’ case, the servants are demons who hunt the naughty children. At Sinterklaas, Zwarte Piet (“Black Pete”) performs the same role. He hands out punishment to the naughty children, and candy and presents to the well-behaved children.

Zwarte Piet, unlike the demon Krampus, is a caricature of a negro (note that neger, or negro in English, is still a commonly used term for blacks in The Netherlands). He is always played by white men or women in blackface, featuring thick red lips, large golden earrings, a curly wig, and a funny accent, dressing like a sixteenth-century page. It couldn’t be more obvious that he is a caricature of a black man. Civic nationalists steadfastly deny that this is so, however, and insist that it is just chimney soot and colonial garb, and that people shouldn’t complain so much about racism, anyway. Truth be told, it probably was just a modification of Krampus to suit the Dutch colonial epoch; but yes, it is a caricature of a black slave.

Obviously, in our Americanized public discourse, given that Europe today is a cultural slave to America, this became a problem. Black activists started complaining that Zwarte Piet was a racist caricature offensive to “Dutch people of African descent.” In 2013, the United Nations ruled that it was a problematic tradition and should be changed. And since 2013, a debate is ongoing about Zwarte Piet every year, lasting from November until mid-December, when Sinterklaas is celebrated.

Strangely, this issue of removing blackface from an ancient children’s holiday became a robust redoubt for the defense of nationalism. When polled, eighty percent of Dutch people said that Zwarte Piet should not change. Every even vaguely nationalist or patriotic politician, media personality, actor, and academic declared themselves to be against changing Zwarte Piet. Whether conservative, libertarian, or populist, the Right was united on this issue. The Dutch could swallow mass migration, the legalization of gay marriage, a mosque on every street, a million Muslims in their country, increased crime, and increased taxes to fund the expanded welfare state – but this is where the Dutch drew the line. We will keep our blackface, and no foreign institution, activist group, or lobbyist in the world will change our minds. If necessary, blackface will be defended with violence.

Last year during Sinterklaas, the ceremony marking Saint Nicholas’ entry into The Netherlands was to be held in Dokkum, a Frisian town in the north of the country. Traditionally, a different town is selected every year for Saint Nicholas’ “official” entry. It has to be a coastal town, because he arrives by steamboat. The anti-Zwarte Piet discussion had been ongoing for four years by that point, and several activist groups had emerged whose aim was banning Zwarte Piet: “Kick Out Zwarte Piet” (KOZP), “Graauwe Eeuw” (Grey/Grim Century, a play off of the Golden Century, the era when the Dutch were the preeminent European naval and colonial power), “Stop Blackface,” and “New Urban Collective.” These groups were all set up and led by blacks, most of whom were recent arrivals from Africa to boot. Of these groups, KOZP is the most prominent, and I will use their name to refer to all the anti-Zwarte Piet black activists generally.

KOZP announced that they would demonstrate in Dokkum against Zwarte Piet, and at the same time one of the leaders of Graauwe Eeuw made death threats against the actor playing Saint Nicholas. He said he wished to see “blood and bone splinters rain upon the children in attendance.” The local Frisians decided they weren’t about to let this happen, so on the day of the event, some fifty locals blocked the highway to Dokkum with their tractors and cars, preventing KOZP from entering the town and allowing the celebrations to carry on as usual. The media was scandalized, while the common man heralded them as heroes. 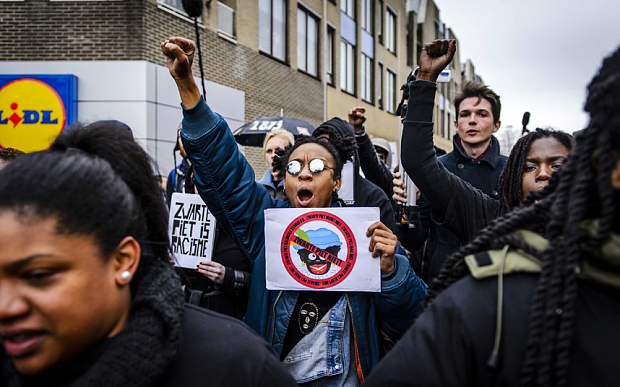 The locals involved were all charged with blocking a highway and endangering traffic. In a highly politicized trial, a dozen or so of the Frisians were tried and convicted, and given comparatively heavy sentences. These snelwegblokkeerders have become folk heroes. At their trial, several hundred people showed up to support them, including politicians of the PVV (Geert Wilders’ party) and some prominent Right-wing journalists. The instigator of the blockade, a local businesswoman, was given a month in jail and two hundred forty hours of community service. In comparison, a Polish drunk driver who killed two people at a zebra crossing last year got only one hundred ten hours of community service.

The trial was held less than two weeks before Sinterklaas 2018 and became a huge media spectacle. Tensions were high given that it coincided with the revival of the usual debate about Zwarte Piet during the 2018 holiday season. In the last few weeks, over three hundred thousand euros has been crowdfunded to support the convicted Frisian snelwegblokkeerders.

And then it was time for Sinterklaas 2018. Last Saturday, November 17, was the beginning of this year’s celebration. As usual, an actor dressed as Saint Nicholas with a host of Zwarte Piet helpers sailed into The Netherlands on a steamboat. This year, the town to receive the official Saint Nicholas was Zaanstad. Most towns and even small villages who host the event hold a parade for Saint Nicholas and his helpers. The KOZP announced that they would hold demonstrations against the event in eighteen towns and cities. The news spread like wildfire, and many nationalist groups announced counter-actions, mostly dressing up as Zwarte Piet to spite the Left and handing out candy and nationalist flyers to children. It was good optics.

But the bad optics started on the day itself. As I said, eighty percent of Dutch people support Zwarte Piet staying black. And this discussion has been ongoing for five years, with the common man on the side of Zwarte Piet, while the Left, the media, and minority activists oppose him. Anger has been growing on both sides. On the day, things escalated quickly. Loose coalitions of football hooligans, activists, and working-class men started fights with the KOZP demonstrators. I will list the most notable events of the day:

There were other altercations that didn’t turn violent and were limited to verbal abuse in Den Helder, Tilburg, Amstelveen, and Hoorn. In total, sixty-two people were arrested and over a dozen hospitalized. Everywhere KOZP went, they were either forced to retreat or to rely on a strong police presence to remain. Thousands of ordinary Dutchmen mobilized throughout the country in a manifestation of spontaneous rage against the minority grievance industry that is spoiling their culture, traditions, and their children’s parties. The line had been drawn in the sand, and this is where the Dutch literally fought to keep their way of life.

For us Dutch etnonationalists, however, it is an odd spectacle. We of course aren’t opposed to Zwarte Piet. We support Zwarte Piet if only so that we can annoy the Left and the grievance industry. And we acknowledge that Zwarte Piet is in fact a caricature of a black man. On the other hand, we also don’t care that some are offended. They can go and be offended somewhere that isn’t in The Netherlands. But why is it this event that sparked blind fury among the common Dutchmen? Why not one of the myriad other problems caused by multiculturalism? We have been abused, dispossessed, burdened with taxes, beaten, robbed, and assaulted by all the joys of multicultural society for decades now – and this is the breaking point? Blackface on an actor performing for children?

My personal theory is that this was such a blatant case of anti-white activism, and combined so many facets of the anti-white crusade in it, that for the common man who intuitively senses that something is wrong – who doesn’t like multiculturalism, but can’t yet articulate the cause – now sees the culmination of several decades of his dispossession embodied in a single cause: the anti-Zwarte Piet movement.

Suddenly, it has all been revealed to him. The anti-white hatred. The enmity that his own institutions have for him. All the dimensions of white dispossession are present: the Leftist media siding with an aggrieved minority against the general populace, despite eighty percent opposing the change; an activist group of recent immigrants who openly hate whites and who are ungrateful for everything Dutch society offers them; a legal system that punishes the natives disproportionately while letting minorities off the hook; a very weak excuse to pass unpopular measures (“we need to make Zwarte Piet inclusive of children from all backgrounds”); and elitist Left-wing politicians denouncing the prevailing racism among the working class.

The native Dutchman sees this dishonesty and unfairness subverting his traditions, and he suddenly realizes, “Wait a minute, this is what they have been doing all along!” He grows furious; not even his child’s party is safe from them. Not even his own childhood memories. So there is the line in the sand. No more, they say. They pushed too far.

I therefore encourage the Left to continue to try and ban Zwarte Piet, and to take even harsher repressive measures against those who rioted on Saturday (which the Minister for Justice, Grapperhaus, has already announced). Those who defended Dokkum last year were put through a political show trial. In response, this year thousands of men stood up and decided to fight – in some cases physically – when it was necessary. Let the Left keep escalating. The Dutch are angry. If they want to make Zwarte Piet an icon of nationalist resistance against globalism and multiculturalism, then blackface will become an act of defiance in our country.