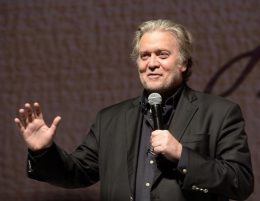 The following note was published by Ferenc Almássy, the Editor-in-Chief of the Visegrád Post, a site specializing in news from Central Europe from a Rightist perspective, today in response to Steve Bannon’s lecture at “The Future of Europe” conference in Budapest yesterday.

I had the opportunity to attend the speech held by Steve Bannon in Budapest on May 23, 2018. This event was part of a two-day symposium organized by the Hungarian government and featuring various personalities and organizations close to the ruling national-conservative Fidesz party, and with the blessings of the latter. The conference was called “The Future of Europe.”

He even seemed rather confused regarding the regional situation, to tell the truth. Twice, he spoke about the “Three Ocean Initiative,” but then immediately reassured the audience that “we follow events in Central Europe closely.”

All we got were things that are nothing new for anyone who is following his work or who followed the last American presidential campaign. Of course, Steve Bannon is smart, speaks clearly and in well-formulated English, and is most definitely a pleasant orator to listen to. But at such an event, far more was expected from him, especially given the context, such as the Central European revolt against the Brussels elites; the ongoing tensions between the US and Russia, with Europe between them; Trump’s pledging of support to the Three Seas Initiative last July; and of course the recent reelection of Viktor Orbán, “who was Trump before Trump,” according to Bannon’s own words.

Well, I was disappointed, but not really surprised. The former “Eastern bloc” is neglected in the West, for some understandable reasons. This has in part to do with its continuing inferiority complex in relation to the West, which causes its intellectual elites to applaud anything Bannon might say, even if it is against Central European interests. It might be a strategic mistake for them to feel this way, but that’s the reality of the situation.

But this is my main issue with Bannon’s speech. Being disappointed in a talk is not a problem that would warrant an article. But at the end of his speech, while answering some questions from the moderator, Bannon stated, essentially, that “China, Persia, and Turkey are a danger,” and that they are “in a phase like the 1930s in Europe,” and that “we must be strong and tough in order to avoid living through an imminent 1940s.”

It was at this point that I lost all vestige of interest in what Bannon was saying. For some reason, he is pushing this militaristic agenda for the interests of the United States. Let’s be clear: I do not blame him, he is an American patriot, and is working quite obviously for American interests. Good. The problem was that this conference was about “the future of Europe,” and as a Central European, I strongly believe that our interest is in not following any warmongering foreign policy.

Steve Bannon appeared to me to be unprepared for this conference, or at least unable to bring something new or interesting for Central Europeans, and last but not least, he was pushing a warmongering, US-centered agenda. It was a disappointment, but also for me, it inspired a need for defiance.