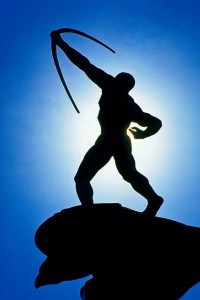 I had a while before the first speech to talk with other attendees, and during this time I grabbed a couple of notepads and a pen. I met familiar faces, including a few friends, and was impressed as usual by the quality of the Swedish nationalists. I also met attendees from Norway, Finland, Germany, France, the UK, Ireland, the US, and Canada. When after a short while we sat down and were asked how many of us came from outside of Sweden, it looked to me like nearly half of the audience raised its hands.

We heard speeches from Marcus Follin (“The Golden One”) and F. Roger Devlin. Those familiar with The Golden One are aware of his emphasis on personal improvement, eliminating one’s vices, and becoming the best possible version of oneself. He put forth a few challenges to the audience, including having a sense of style in how you dress, being well-spoken, abstaining from drunkenness, and taking care of your body. To paraphrase: You must create the best possible environment for your mind to thrive. His most crucial point was to never to allow others to frame you as the transgressor for your views. “Instead of asking yourself how many friends I’ve lost for my views,” he said, ask yourself: “How many friends have lost me due to their insanity?”

Like many people, my familiarity with Devlin is mostly based on his book Sexual Utopia in Power, along with some of his essays and podcasts. Two of his statements that stuck with me were:

He continued on the theme of proper framing. Even for those of us who have followed his ideas for several years, his blunt way of stating things is a refreshing antidote to the noise outside. After all, we who tell the truth about what is happening to Europe and the West are the adults.

Millennial Woes spoke next to provide us with “a cautionary tale,” in which he discussed a recent bit of Alt-Right drama that might have kept potential supporters from coming to our side. He emphasized that it must be our goal to attract “the everyman,” and that we will need allies—even those who currently consider themselves leftists. He warned against “self-ghettoization,” a point which has particular relevance in this post-Trump campaign, post-Charlottesville moment. He warned of the “counterfeit executive” who feeds off of deception.

The most notable parts of his speech for me were these:

Everything that we believe is correct […] regardless of our reasons for believing it. But we should be aware of those reasons that we have for believing certain things. Because otherwise, if we’re not aware of those reasons, they might well trip us up. They will cause us to say things, believe things, and do things that are detrimental to ourselves and to our movement.

Next was Greg Johnson, who amusingly conducted a brief survey to find out how many of us were ‘cat people.’

“Well, I think cats are decadent,” he responded, and declared that all cat people must be purged from the movement.

Next on the chopping block were ‘tea people,’ and those who tolerate tattoos. This was of course to illustrate how foolish it is to try to exclude people based on irrelevant qualities. It reminded me of a short essay by Matt Parrot a few years ago, called “The Island of Misfit Goys.”

Another key point was that in order to get legitimacy, we will have to be treated as acceptable by at least some people who do not share our views. Another was quite similar to something he said at the Scandza Forum last July in Oslo: that our goal is not to pull the mainstream entirely toward a single position on every political issue. Rather, we have to make white survival a sacrosanct and unquestioned presupposition for a society which tolerates debate on other issues.

The final speaker was Jared Taylor, who apparently had been encouraged to share more personal details about his life. Interestingly, he recalled a time when he was a student and missed a crucial opportunity to become redpilled on race.

Something he emphasized was that we should not impute evil motives to our opponents. Even the leftists of today are potential allies. He gave the example of Angela Merkel, who despite participating in the destruction of Germany, probably does not do so out of actual hatred for Germans.

He ended on quite a positive note; saying that he believed our eventual victory is certain.

After this was the Q&A, which I felt was a bigger portion of this conference than the previous two. Patrick Casey of Identity Evropa also participated in this segment, adding his thoughts on activism and outreach to an American context. Each speaker had a few opportunities to respond to questions. In a couple of cases, attendees had points of disagreement with the speakers.

After that we had another break. We split into various parts of the room to talk. There was a guy selling drinks at the back, who in all likelihood was already formulating the shocking story he planned to tell his liberal friends about all these despicable, well-dressed, and polite people.

Finally, we gathered one last time to experience a live reading of Beowulf accompanied by music. In that moment all the questions about strategy and politics dissipated for me, and I was absorbed by sound into an attitude that doesn’t need to beg for any kind of legitimacy. This was part of a story I had read in school more than once; the story about a great, boastful Nordic man—a European man, who defeats a monster that frightens everyone else away. For someone who has admired the pagan style from afar for quite a while, it was satisfying to see and hear that style emerge in something so fundamentally English. I thought that in this moment, nationalism was especially normalized.

Later in the evening people gathered at a nearby bar/restaurant. I got to talk to a few Swedish acquaintances from conferences past, and made a few new Norwegian ones. My notes were predictably lost in the end. Note-taking is often more about inscribing ideas and facts into one’s head than anything else, anyway. I have tried replaying in my head what I wrote down; Marcus’ words of wisdom, a few email addresses, a question I considered asking, ideas for things to write, among other things.

Perhaps the simplest and most sincere sentence was something I scribbled down during the Q&A. Christoffer Dulny of the Nordic Alt-Right stood up, and before asking his question stated:

“Swedes are white, and Sweden is ours.”