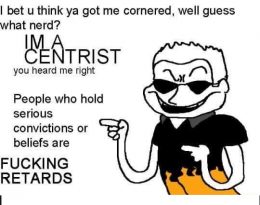 As of late, the New Right has been butting heads with the so-called “skeptic” community; with notable names such as Kraut and Tea, Sargon of Akkad, Thunderfoot, and so on. The so-called “skeptic” community prides itself on a supposed platform of pure rationality backed by evidence, plausibility, and emotionless logical deduction. Putting aside the necessary discussion over whether or not these criteria, alleged to be utilized by the “skeptics,” are in fact the best ones by which to judge socio-cultural norms and philosophies, it must be pointed out that these alleged criteria are, in fact, a simple pretense.

Anyone with an open mind paying close attention to these so-called “skeptics” will notice a peculiar phenomenon. They are, in fact, not “skeptics” at all. This isn’t merely true in the philosophical sense, but in layman’s terms as well. The honest thinker may find it strange that when a “skeptic” confronts a feminist, he will eagerly and smugly cite the latest data relevant to sexual dimorphism and sociological behavioral patterns, and yet at the same time, he will pretend to “skepticism” when confronting the solid data of Bowling Alone, J. Philippe Rushton, or Charles Murray.

This selective “skepticism” is not skepticism, but reluctance and fear. First, understand that the “skeptic” community surrounds specific figures who are little more than egotistical jesters entertaining prideful and spiteful laymen. Their personas entirely consist of smugly showcasing the latest in nutty and irrelevant individuals confined to whatever ideological community they are involved with to the popcorn-readied audience of men and children alike. The funnier the insults and critiques they assault the insane ideologue with, the higher the subscriber count and YouTube views.

This comfort-driven egoism is at the heart of the so-called “skeptic” community. It is no mystery why these individuals take up the most comfortable and safe positions imaginable, and eagerly defend them tooth and nail for the satisfaction of the audience. The audience laughs, they click a “good job” button, and the ego of the “skeptic” inflates a bit more, prompting more of the same.

So what exactly dictates the behavior of the “skeptic” community? It is a smug centrist mob mentality. In other words, where the Overton window lies, is where the contemporary “skeptics” of the now exist. While feminism is certainly promoted by the elites of the world, for average people it is to the ‘left’ of the Overton window. Race realism is loathed by the elites of the world and currently considered undesirable by individuals at large, and is therefore ‘right’ of the Overton window. While one is ideological in its entirety and the other is entirely based in reality, how is the “skeptic” justified in equally dismissing both?

The “skeptics” are the opposite of what they claim to be. They are self-centered, egoistical, safe-thinking simpletons with the coordinated will of the mob directing their beliefs. They couldn’t be less “free thinking” if they tried. If Sargon of Akkad lived in 1930s Soviet Russia, he would publish a newspaper article titled “Yes, the bourgeoisie must be dealt with, but must we use so much violence?”

» Warning! All Military Careers are Swiftboatable