Why the Holocaust Happened, & Why it Won’t Happen Again As a non-Jew, there are many countries in which I am not free to question the facts of the holocaust or even to offer a definition of what it was. Fortunately, for the purposes of creating white homelands, I don’t have to.

I’m not a historian at all, much less a historical revisionist (although I support the freedom of revisionists). I’m a philosopher by training, and my focus is New Right metapolitics, which means establishing the intellectual and cultural preconditions of White Nationalist politics. And, as I have argued in my essay “Dealing with the Holocaust,” whatever happened to Jews in World War II does not impede the case for white ethnonationalism in the least. Indeed, as I shall argue here:

It is implied, of course, that a holocaust could befall anyone who is “different.” For instance, the meme above is now being inserted into discussions about excluding Muslims from white countries. And it is true that any people can be a victim of genocide. For instance, as I have argued elsewhere,[2] whites today are the targets of slow, systematic genocide.

Jewish holocaust propaganda emphasizes the universality of the threat of genocide to build a coalition of people who are against “another holocaust.” But the only holocaust such campaigns actively work to prevent is another holocaust against Jews. For if every people can fall victim to genocide, then every people should have the right to protect itself: to differentiate and defend itself from others who might destroy it.

But the threat of “another holocaust” is deployed precisely to prevent non-Jews from erecting intellectual and political barriers to genocide. It is deployed precisely to reinforce multiculturalism and globalization, which dismantle all intellectual and political barriers preventing Europeans from being demographically swamped by fast-breeding aliens.

The only people who are free to erect barriers against “another holocaust” are Jews.

Jews are a small nation with a tendency toward low fertility and high parental investment (the K-strategy). All such populations are vulnerable to demographic swamping by more fertile, less civilized peoples. But Jews have erected the intellectual and political boundaries necessary for their long-term survival.

Yet Jews routinely claim that they face “another holocaust” whenever whites say “no” to the Jewish state or whenever anti-Semitism shows a tiny uptick. This is utterly ludicrous, because of all low-population, high-K strategy peoples today, Jews are the least threatened by “another holocaust.” It is also morally obscene when Jews, who are in no danger of genocide, use the specter of “another holocaust” against whites, who are currently the victims of slow genocide. 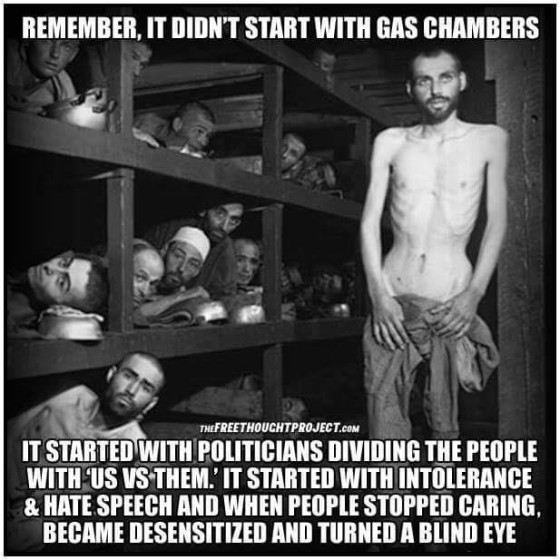 In short, the “lesson of the holocaust” promoted by Jews is pure self-serving hypocrisy, another “live and let die” double standard: ethnocentrism for Jews but not for us, walls for Israel but open borders for us. The people who are most threatened by genocide need to embrace multiculturalism and open borders, while the people least threatened by genocide can live and travel and make enemies wherever they please, secure in the knowledge that they have an ethnostate with a nuclear arsenal as their protector and refuge. It’s a disgusting moral and political swindle, nothing more.

What, then, is the real lesson of the holocaust? To answer this, we first have to know why the holocaust happened.

The answer is simple: The holocaust happened because Jews lived among other peoples rather than in their own homeland. When different ethnic groups live in the same society, ethnic conflict is inevitable. And when ethnic conflicts explode into violence, stateless peoples are much more vulnerable to extermination than those who have sovereign homelands.

However, there will never be another Jewish holocaust. Why? Because the state of Israel now exists, with its vast illicit arsenal of weapons of mass destruction. Adolf Hitler’s clone could be elected German Chancellor, and there would not be another holocaust because Jews have nukes and Germans don’t.

Thus whenever Jews evoke the possibility of “another holocaust” to extract another pound of flesh from our dying race, the most polite response is to tell them that we have our own holocaust to worry about.

Jews have invested a great deal in promoting the idea that no crime is worse than genocide. Since whites are actually the target of genocide, White Nationalists can use this propaganda to our advantage. The lessons Jews draw from the holocaust—stigmatizing ethnocentrism and nationalism for whites while promoting it for Jews—is morally indefensible. The true lesson of the holocaust is that multiculturalism is bad for everyone, and ethnonationalism is good for everyone. Jews already have their homeland. Whites need to start reclaiming our homelands and sending non-whites to resettle in theirs. That is what White Nationalism is all about.

Ethnonationalism for all nations won’t create a world without conflict, but it will create a world without holocausts. By replacing multicultural nations with homogeneous homelands for all peoples, ethnonationalism will eliminate ethnic conflicts within states and make it impossible for stateless minorities to fall victim to genocide. As whites approach minority status in our own former homelands, this is a lesson of the holocaust we can all take to heart.

« The Left’s Psychological Warfare Against Europeans