A Runestone Raised for a Fallen Ukrainian Asatruar 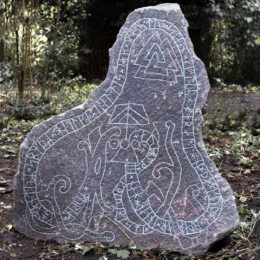 In Old Norse, written in the Younger Futhark: “Moria, Komandor, Spámaðr, Helga, Valdis, and Ing raised this stone in memory of Harald, valiant man and husband of Inna. He fell in the east.”

The story of an Asatruar fighter who fell in Ukraine and is being honored with a runestone was told to the author.

Like many Westerners, Harald rediscovered himself at the age of 30 when he got serious about sports, achieving a high level for a non-professional. He started with trail running, but, like Harald’s approach to his life, he grew ever more ambitious, entering a triathlon and eventually adding swimming and cycling to his schedule. His passions led him to travel abroad to attend European competitions, though this was never a substitute for the Ukrainian outdoors in Dnipro that he held close to his heart. 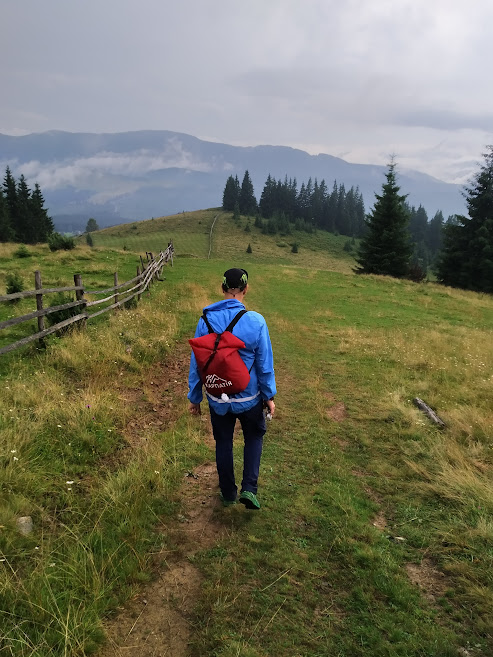 Asatru is a religion that is being rebuilt in the modern world from the ground up in order to express the Aryan European spirit as Carl Jung described it. While Harald never described his faith in paganism in depth, he felt a calling from the gods who reside in the forests, fields, and mountains of our homeland.

When not alone with his thoughts and the gods, he lived a successful folkish lifestyle, surrounded by many friends, family, and many other acquaintances who would come to know his name. This never seemed to tire him, as his dedication gave him energy which always catapulted him toward the next soul that he would reach out and touch. He always retained a young spirit, searching for adventure. And adventure was indeed soon to come . . .

Graduating from the Kyiv National University of Technologies and Design’s Military Department, specializing in optical devices, calamity found Harald as Ukraine roared into the Maidan revolution, in which he participated. Though he was not a soldier by nature, being better suited to intellectual pursuits, it gave him a taste of what was to come for Ukraine.

You can buy Collin Cleary’sWhat is a Rune? here

After eight years of proxy fights, the real invasion finally came in February of 2022. Harald joined the Territorial Defense Forces and was assigned the rank of Lieutenant, as is often the case for university students who volunteer during times of conscription. Now at the helm of the Sixth Company’s second platoon, A-40-81, war came calling for them in July in the Kharkiv region.

During a deadly game of cat-and-mouse maneuver warfare, Harald’s platoon was discovered by Russian spotters and soon pinned down by artillery fire. The men scrambled for what little cover there was and dug holes in the ground as the nerve-wracking sound of incoming shells howled above. Trying to escape was sure to get them killed, so A-40-81 had to sit the barrage out for four hours. Only 40% of the men survived the ordeal to be able to share the last moments of Harald’s life. He was struck down as he was helping his comrades to dig protective ditches.

Kharkiv was liberated in September. Harald and those of his men who joined him in death thus spent two months under the Sun until his country could claim him in the fields where his gods lived, where he returned to the sky and gave back to nature what the Russians had taken.

Once they had received the terrible news, Harald’s friends and relatives immediately set out to bring greater glory to his memory by erecting a runestone in his memory. They approached an experienced stone-carver from among the fallen warrior’s acquaintances who was deeply moved by Harald’s gesture. Finding a suitable stone, the group consulted with experts and locals on how a proper runestone should look. The text was written in the old style, and the proper runic forms were used.

After the carving was completed at the workshop, the stone is now being temporarily kept at a house where it is being painted. The house is a place where Harald’s birthdays and the summer and winter solstices had been celebrated around the fire. Harald’s friends hope that they can continue to maintain the house as a place for get-togethers. When the painting is finished, the stone will be placed in a national park near Kyiv alongside others. An explanatory plaque will be added as well.

Harald was a man who was one-of-a-kind. His Elvish motto was: “Don’t be careless; remember that you live forever!”