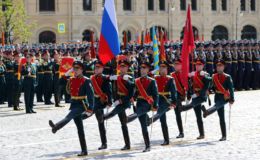 Marko Marjanović, editor of Anti-Empire, was host Nick Jeelvy‘s guest on the latest broadcast of The Writers’ Bloc, where they discussed the Russia’s announced mobilization, and it is now available for download and online listening.

00:06:30 Who is Marko Marjanović? Follow Marko at Anti-Empire and Substack. Check out his important podcast “Deep Thoughts about Ukraine” on The Worst of All Worlds
00:09:30 The Russo-Ukrainian War is the largest land, air, and naval war in Europe since the Second World War
00:10:00 People are systematically misinformed about the Russo-Ukrainian War
00:11:00 The Russian military has lacked the personnel to wage the war since the beginning
00:14:30 The Russian infantry shortage, and conscription against hardened Ukrainian troops
00:16:30 Putin, mobilization, and the number of 300,000
00:18:00 A shortage of Russian officers and lack of organizational structure
00:20:00 At the outbreak of war, Russians had a higher level of readiness, but was smaller, plus its weaknesses
00:21:00 A carbon copy of 1968’s Operation Danube in Czechoslovakia
00:23:00 Why did the Kremlin assume that Ukraine would put up no struggle?
00:27:00 Russians wearing Ukrainian uniforms in cloak-and-dagger fashion
00:28:00 “The Kremlin Way,” minimum escalation, and doing less than what is necessary
00:29:00 Russian losses in northern Ukraine are the worst
00:30:00 Viktor Medvedchuk, the Security Service of Ukraine (SBU), and arresting every Russian agent in Ukraine
00:31:00 The Russian leadership can’t conceive of Ukrainians as a separate people, and Putin is still living in the 1980s with Soviet nostalgia
00:33:00 Russia lacks the diplomatic tools to handle Ukraine
00:35:00 The Balkan saying, “There is no country or state without the war.” Carl Schmitt and the essence of the political and political legitimacy.
00:36:30 Bullshit is the first casualty of war, and true loyalties are revealed
00:38:30 The political space narrows with war and the middle ground disappears
00:41:00 Sunni versus Shi’a, Saudi Arabia, and good security
00:42:30 Biological survival, erring on the side of caution, and war’s impact on friendship and commerce
00:44:00 The true nature of man is deeply Hobbesian; killing each other and being red in tooth and claw
00:45:00 30 years after the Yugoslav War, Serbs are slowly returning as tourists to Croatia
00:47:00 Ethnicities change over time, and the development of new ethnicities
00:48:30 Belonging by blood to a certain place, time, and tribe
00:51:00 Tribalism versus nationalism
00:52:00 The Russian order to mobilize, 300,000 men, and the impact of this surge of manpower on the war
00:56:30 Russian versus Ukrainian progress in the current state of the war
00:57:30 Igor Girkin and the book 80 Days in Kramatorsk
01:00:00 Nick Jeelvy’s theory of Igor Girkin, the Cossack ethos versus the Tsarist ethos, and Orthodox monasteries
01:03:00 There is little genetic difference between east-bank Ukrainians and southern Russians
01:04:00 Russia can’t deploy all their forces at once, deploying piecemeal, logistical constraints, and training programs
01:08:00 A possible repeat of Donbass; the slaughter of poorly-trained fighters
01:09:00 The Soviet military of the 1930s and ’40s
01:11:30 Trotsky and the Soviet Red Army
01:13:30 Creating logistics and fighting over a very large area like Ukraine
01:14:30 What do we know about the Ukrainian army?
01:18:00 Border guards and territorial defense
01:20:00 Inflated figures of soldiers
01:21:00 Partying in Odessa and Kiev during a war and Ukrainian escalation
01:22:00 The modern Lend-Lease Act in the West and having more metal versus manpower, or more manpower versus metal
01:24:00 A Carl von Clausewitz maxim: War power is determined by the will and the means to fight
01:25:00 When did relations between the West and Russia break down?
01:27:30 Russia is a Western nation and their problems are Western
01:29:30 The role of Russia is to be the whipping boy of the West, and its a frontier nation like America
01:32:00 Russia is also an agent of Westernization
01:33:00 Russians are losing civilizational confidence like the rest of the West
01:34:00 George W. Bush, Vladimir Putin, and “the unbreakable Russian will”
01:36:00 An estimate of Russia’s will to wage a war
01:39:30 Crimea, referendums, and Russia declaring territorial claims
01:43:00 America owns the world, makes the rules, and then breaks them
01:44:00 Not accepting the promises of someone who is stronger than you, and justifying the invasion of Ukraine
01:45:00 Appeasement with Russia may be Ukraine’s best move
01:46:30 The Geneva Convention is an imperialist tool, nuclear weapons, and independent sovereignty
01:48:30 The naïveté of small escalations, separatism in Donbass, and the annexation of Crimea
01:49:30 Putin created an anti-Russia on its border
01:51:30 Will Russia resort to barrier troops and the FSB shooting retreating troops as in the Second World War?
01:53:30 Why Stalin’s Soldiers Fought by Roger R. Reese
01:54:00 Denazification, Azov, and what is the Russians’ public message?
01:57:00 When Putin says “denazification,” he means eliminating the unnaturalness of Ukrainian national identity caused by the brainwashing of the West’s evil magic
01:59:00 Taras Shevchenko, the National Poet of Ukraine, “deukrainization,” and cultural genocide
02:01:30 Denazification in post-war Germany and the Frankfurt School
02:03:00 Putin intends to implement deukrainization like the Americans implemented denazification
02:05:30 Closing remarks

« In Defense of Superstition