An Uncomfortable Conversation about Race 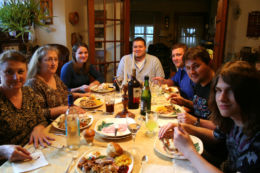 Jeremy and Chet are two brothers who live in the Midwest in the suburb of Whitown, USA. Chet is a few years older than Jeremy and graduated from college a few years before, while Jeremy is in his junior year at a college on the East Coast. Their parents are conservative, though only in a surface-level fashion, and have half-heartedly attempted to instill these values in their two sons. Unbeknownst to them, their two children have abandoned their FOX News upbringing, with Chet going down the libertarian-to-Dissident Right pipeline and Jeremy falling down the apolitical-to-“current thing” tree.

It is Thanksgiving and the family are together for the holiday. Jeremy has been given an assignment for the break by his Race and Ethnicities professor on having an “honest conversation about race,” probably with the intention of hurting the white solidarity within his students’ families (only white students were assigned this project, while the other students were given an automatic score of 100%).

As the evening is winding down and Jeremy sees that his family is about to leave the dinner table, he pipes up.

Jeremy: Guys, I think it’s time we had an honest and uncomfortable conversation about race in this family. We live so far away from people of color in this state that we never get to intimately see the repression that continues in this country. The racism is endemic in the system, and just sitting idly by is allowing this oppressive and exploitative system to perpetuate. What are your thoughts?

Father: I don’t think that’s right, son. While blacks may have had a hard time in the past, things have changed since I was a kid. Sure, blacks might be poorer than us, but it’s up to them to pull themselves up by the bootstraps.

Jeremy rolls his eyes and looks at Chet, who is chuckling.

Jeremy: Ugh, you are both part of the problem. You can’t see it because you’re steeped in whiteness and your white privilege. Just because you can’t see the oppression doesn’t mean it doesn’t exist. And you have the nerve to laugh at such an important issue.

Chet: What are you even talking about with all this talk of oppression and white privilege and all this nonsense? How are white people like us oppressing anybody?

Jeremy: Black people are poorer and are always killed by the police. And there are way more black prisoners than there should be. How is that not oppression?

Chet: Well, I can’t prove a negative. You need to explain how that is oppression. Have you ruled out any other possible reason there could be other than oppression?

Jeremy: Oh, my God. Don’t tell me you’re a racist.

Chet: I just asked a question and you immediately resort to name-calling. Is this what they teach you in school?

Jeremy: You’re implying that blacks are inferior than whites. You’re clearly being racist.

Chet: I didn’t imply anything. Maybe a Freudian slip on your part, little brother?

Jeremy: Okay, fine. According to you, what could cause these disparities?

Chet: Well, as for the prison thing, they commit way more crime. That’s just obvious. As for being poor, maybe it has something to do with their culture of consumerism and low IQ?

Jeremy: See, I knew it. You are a racist.

Chet: Are you seriously denying that blacks are less intelligent than whites?

Jeremy: Of course. I’m not a racist piece of shit like you, man!

Chet: So you deny every IQ study ever?

Chet: Then why do the Chinese score better than whites?

Chet: Why do the Chinese score better than whites?

Jeremy: Uh, well, the Chinese have a culture of studying and getting good grades, of course. Everyone knows that.

Jeremy, for the first time in a long time, was forced to think about his line of reasoning. He knew that the Chinese had an academic-centric culture. He’d heard all about the “Tiger Mom” and why Asians, along with whites, needed to step aside in the admissions process to make way for a more diverse student body. However, he also knew that claiming that blacks don’t have this culture would be a faux pas, even if it were true. He therefore chose not to retort, a defense mechanism against being “canceled” he learned early in his university career after witnessing a white friend of his being destroyed by a similar comment.

Chet: Let my spell it out, bro. Blacks have a lower IQ than whites on average. No serious person denies this. The only question is why this is the case.

Jeremy: Well, that doesn’t even matter, anyways. What even is IQ or intelligence? No one has a good definition for it, and I know plenty of smart black people.

Chet: We don’t know what intelligence is? Seriously? So, you think your hero Noam Chomsky would score low on an IQ test and you think a homeless drug addict could likely score high? Give me a break. Intelligence is the ability to reason and solve problems. Everyone knows that. IQ is one of the oldest, if not the oldest, psychological metric in the field. These studies have been around for over a hundred years. Anyways, wow, you know some smart black people at a frickin’ university. What a shocker, man! Apparently your poli-sci major doesn’t require stats anymore.

Jeremy: Dude, you think I don’t know my stuff, but I do. IQ tests are inaccurate because they use cultural and linguistic bias. Verbal IQ tests will use words like “regatta,” which blacks won’t know, as regatta is a rich white sport.

Chet: Well, if you knew your stuff, you’d know that modern IQ tests can now use only universal symbols, and these culturally neutral tests actually exacerbate the differences between races.

Jeremy: Whatever, man. All I know is you’re racist and you’re using racial pseudoscience to rationalize your white privilege in this oppressive system.

Chet: How am I oppressing anyone? Unlike you, I don’t really think about black people all day, let alone about oppressing them.

Jeremy: I already told you, they are arrested more, get killed by the police more, and have less money.

Jeremy: That’s probably not even true. It’s probably unconscious bias that makes us associate people of color with criminality.

Chet: So the FBI and Department of Justice are lying? And before you say yes, don’t forget to put on your clown shoes.

Jeremy: All right, well, maybe they do commit a bit more cri —

Chet: Which we already established was a result of lower IQ. Once you control for IQ, there is virtually no difference in income between races. Put that in your pipe and smoke it. And criminality controlled for income doesn’t go away, by the way. The poorest white communities in Appalachia are less violent than rich black communities.

Jeremy: I don’t believe that.

Chet: You don’t have to. It’s still the truth.

Chet: Which you can measure how?

Chet: Which, again, we have established to have other causes than just your “racist” copout. But let’s just say everything I said was a lie. How do you intend to erase these prejudices which are so subtle that even the supposed racists are unaware that they are themselves racist?

Once again, Jeremy had not thought too hard about the actual feasibility of policing the minds of every person in the country. It was always more of a “we’ll cross that bridge when we get there” sort of thing for him. He assumed that the experts and professors had that all sorted out, and he was content to simply be an “ally.”

Chet: Don’t you think it’s a little suspicious that all of your social issues coincidentally have no possibility of actually being implemented simply by virtue of human nature? Isn’t it curious that all of these lowlifes are benefitting from your increasingly ridiculous mental gymnastics, gaining important positions in society, and grifting money off these invincible golden goose issues? They invent impossible issues and then sell a solution which coincidentally always involves them getting more power.

Jeremy: Hmm… I guess. I mean, I can’t just trust you on these things.

Chet: Look, there’s all these issues where people who look like us are demonized. We’re responsible for slavery, for genociding the Indians, for colonialism, all of these things —

Jeremy: Which is all true!

Chet: Yes, technically that’s all true. But as I was saying, can you name some evil things that non-white groups are responsible for, for example?

Jeremy thought long and hard in good faith for a “sins of the father” that applied to a people of color group and honestly couldn’t think of a single one.

Chet: Genghis Khan killed 77 million people, the Native Americans tortured captives to death, the Aztecs practiced industrialized mass human sacrifice, the West Africans — who are the ancestors of African-Americans — genocided the majority of Africans of rival ethnic groups like the Pygmies, the Haitians exterminated every white person on their island after their revolution, and everyone participated in slavery until those accursed “straight white males” you harp on about banned it worldwide, like in Ethiopia and the Barbary pirate states. They didn’t teach you any of that, Mr. History Minor?

Chet then walked away to finish washing his dishes and set up Monopoly in the living room. Chet often had these types of conversations with individuals, usually with people he felt were savable, though he liked messing with the freak-show crowd from time to time, too. There were a few issues like gun control and tonight’s topic that were enjoyable because they were so objective and one-sided. He knew that Jeremy’s disagreement would only be heightened in the short term. He knew this well from personal experience, including how he himself had reacted to debating Leftists. It was for that reason that being gung-ho about debating pathological liberals was losing its appeal. He just hoped he had planted a seed in his kid brother’s mind that would break him out of his current pathological, self-hating state.

Jeremy left the conversation privately seething. He knew he had utterly “lost” the conversation, though he knew he shouldn’t see it is a competition. This was one of his least favorite feelings, one he rarely ever felt, as all his friends at university generally agreed with him. Yet he couldn’t deny that there were some questions that, left unanswered, didn’t sit right with him. The fact that he was uneducated about the brutality of Bantus in their expansion through Africa, and that he later learned of some African tribes’ propensity to mass-sacrifice their slaves, particularly disturbed him.

The following week he went to his professor’s office hours, an activity he wouldn’t miss for the world, and asked him about these issues his brother had raised which were bothering him. To his dismay, the African-American professor, a man who he once looked up to, lashed out at him simply for asking questions.

Before, his professors’ gobbledygook jargon had seemed intelligent and enlightening. Now that he was himself the object of derision, he could more clearly see it for what it was: pseudo-intellectuality.

» Counter-Currents Radio Podcast No. 468 Ask Me Anything with Greg Johnson & Beau Albrecht