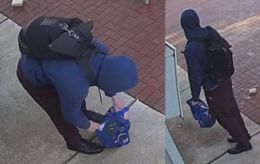 Michael Edgar Bivins allegedly photographed in the act of being as hateful as the Right-wingers he wrote about as an antifa-friendly journalist only a few years ago.

Everyone has a favorite hate crime hoax, right? Mine is the hilarious saga of Azalea Cooley, a cancer-stricken wheelchair-bound black lesbian from Portland. Talk about ticking off the oppression boxes! Once you combine the cancer and the wheelchair and the black and the lesbian, that’s what’s known as an Intersectional Quadfecta. Back in the early 1990s, Cooley notified police that someone had spray-painted mean things, such as a swastika and BURN NIGGER BURN, on her house. It escalated to where someone was burning crosses in this poor cancer-addled, non-ambulatory Sapphic Negress’ backyard.

But after detectives planted surveillance cameras in a nearby apartment, video revealed Cooley on the back porch, standing up from her wheelchair and lighting a wooden cross she’d stuck into a flower pot. It turns out that she didn’t have cancer or need the wheelchair, either.

I honestly thought hate crime hoaxes would never get any better than that.

I may have been wrong, though.

Leave it to an antifa-sympathetic Portland “street journalist” to come up with what — if my hunch proves correct — might possibly be the most ingenious hate crime hoax of all time.

It differs from the Azalea Cooley saga in several significant ways. First off, the alleged perp, Michael Edgar Bivins, is a white male. To my knowledge, despite his years of obsessive anti-racist activism and tireless Nazi-hunting, he has never claimed to be a member of an oppressed racial, sexual, or religious minority. He never claimed to be Jewish, as are so many people who commit anti-Semitic hate crimes. So by allegedly vandalizing and defacing a pair of synagogues and attempting to burn down a mosque that had people inside it, he clearly wasn’t attempting to gain sympathy as a victimized member of a purportedly oppressed minority.

Bivins is a longtime Portland resident who earned national attention a few years ago by filming the city’s chronic and operatically retarded political street violence from an antifa-sympathetic perspective. From 2017-2019, he also wrote an estimated 20 or so articles for the free local rag Willamette Week about things such as a Proud Boys vs. Antifa street fight and a scare story about a “a rise in racist and anti-Semitic hate incidents across the Portland area” that so impressed long-time Oregon Senator Ron Wyden that he mentioned the piece when endorsing some new anti-“hate” legislation.

I first became aware of Bivins’s existence in 2017 after Willamette Week published a cover story hit piece on me that more or less blamed me for creating the Proud Boys and bringing fresh new waves of political violence to Portland’s streets. The article noted that in 1997, right as my book The Redneck Manifesto was released, I made an in-store appearance at a local Portland independent bookstore called Reading Frenzy. The store was owned by Chloe Eudaly, who by the time the hit piece was written had gone on to become a member of the Portland City Council. Since this was Portland, Eudaly was immediately pelted with tomatoes by bloodthirsty purity-spiraling Leftists asking her why she’d even think of platforming such a racist terrorist. Amid the hubbub, rumors emerged that Eudaly had put money on my books while I was in jail.

That’s where Mike Bivins came in. He wanted to know if I was still in touch with Chloe. He wanted to know if she’d contributed to my jail canteen fund nearly 20 years prior. I told him I’d gladly discuss the entire matter if he came onto my podcast and faced me like a man, which he naturally refused to do. Snipe-and-run is the standard MO of the self-described “journalist.”

Mike, if you’re reading this — and I’m sure you will –, I would gladly donate money to your jail canteen fund. All I need are the details, brother.

What adds a completely different dimension to this situation is that at least over the past half-year or so, Bivins’ social media presence indicated that he’d taken a hard-right turn politically. He’d been complaining about Mexican immigrants, Kamala Harris, Joe Biden, and the media’s tendency to bury stories about non-white murderers and black violence against Asians. He referred to Bill Gates as “an Epstein-associated pedophile” and Elon Musk as “basically Jesus.” He is now posturing as anti-abortion and anti-masking.

The first question that springs to mind is, “Why did he change his political opinions so drastically?” The second question: “Did he actually change his opinions, or is this part of the plot?”

Commenters who claimed to have followed Bivins online or knew him personally say that he may have switched teams anywhere from two to four years ago.

Other tweets from Bivins indicate he’d just gotten out of what he called an “abusive marriage” and was spending some nights on the cold streets.

According to a police statement and charging documents, on April 30 Bivins broke a window at the Congregation Shir Tikvah in northeast Portland. On May 2, he allegedly spray-painted DIE JUDEN on Congregation Beth Israel. On May 3, he reportedly twice attempted to set the Muslim Community Center of Portland — whose attendees are said to be predominantly black — ablaze while a worship service was underway. The act was captured on video.

The next day — Wednesday, May 4 –, Bivins allegedly returned to Beth Israel and tossed a rock through a window.

The same day, apparently annoyed with the Portland Police Department’s inability to capture him, he went to a local TV station. According to an unnamed source at KPTV, he reportedly confessed to the crimes. Bivins showed the employee a hammer and icepick he claimed he used to smash windows. “I’m not going to stop,” the anonymous worker quoted him as saying: “He made a point to say, ‘When people find out it’s me committing these things, they’re going to be shocked.’” Bivins allegedly promised to return two days later after the station had done their due diligence about the case and had contacted the religious institutions.

When he returned on Friday, police arrested him. I imagine him saying, “What took you so long?”

He was arraigned on Monday and charged with ten crimes, including felony arson and five misdemeanor charges of bias crime. His jolly demeanor in the courtroom was as discomfiting as David “Son of Sam” Berkowitz’s odd smile when being dragged before paparazzi. After being ordered to stay at least 150 feet away from the mosque and two synagogues, Bivins was bailed out on a measly $45,000 bond (meaning he had to pony up $4,500) and is due back in court next Tuesday. Allegedly he’s staying with his mom for the time being.

The least complicated answer is that he’s just a garden-variety political fanatic who changes his views like most people change their underwear. He sincerely became a “Right-winger” — at least the cartoonish caricature of a “Right-winger” he’d been agitating against all those years — and decided he could garner some clout in his new scene by attacking some Muzzies and Jews.

The most intriguing answer, though, is that this is merely what he wanted everyone to believe. Perhaps he hasn’t changed a single view, and this was an incredibly elaborate attempt to fool people into thinking that he’d been “radicalized” by Right-wing memes — which, as every good Portlander knows, immediately leads one to throw rocks at synagogues and burn mosques to the ground. Maybe his “hard-right turn” was merely an extended Andy Kaufman-style performance piece intended to place his piddling acts of religious terrorism within a long-established Portland tradition that insists if you dare even think a non-Leftist thought, this is what inevitably happens.

If my suspicions prove correct, kudos to you, Mike Bivins, for putting a new twist on the tiresome sameness of hate crime hoaxes. And seriously — if you need me to put some money on your books, let me know, friend.