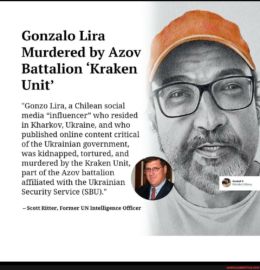 Author’s Note: On last Saturday’s Counter-Currents Radio livestream, a listener named Natalie sent in the question, “What are your thoughts on the Coach ‘Dead-Shill’ saga?” Hyacinth Bouquet transcribed my answer, and I have cleaned it up some. I want to thank Natalie for her question and Hyacinth for her transcription.

Well, from your question, I already can guess what your thoughts are on the Coach “Dead-Shill” saga. This is a reference to Coach Red Pill, who is not a dead shill, but he is a shill. He’s a Red Shill — a shill for Russia and the Red Army who are making war on Ukraine.

Coach Red Pill, AKA Gonzalo Lira, went missing for a while. He said that if he went quiet on social media, we could assume that the Ukrainians had assassinated him and gave a list of people who had allegedly been taken out the same way. Then he went silent.

The reaction to Gonzalo Lira’s disappearance is an interesting litmus test issue.  Some people were praying for him. Others — people like Morgoth, Thuletide, Nick Jeelvy, Jared Howe, Hapaperspective, and me — saw it differently.

Basically, the reaction was: Gonzalo Lira was a Chilean who did not appear entirely white. He was a vulgar manosphere vlogger with a strong grifter/attention whore vibe. He ended up in Ukraine basically as a sex tourist. Then, when the country was invaded, he had the bad taste to ally with the invaders and promote their propaganda while pretending to be an objective observer. Then he set up the idea that he might be disappeared. Then he disappeared.

Isn’t there an interesting moral here? Did Gonzalo Lira think this was just a game? What did he think was going to happen? Apparently, this isn’t just an online game for the people in Ukraine, whose country is getting bombed. It’s not just a way of scoring points online. It is not just “owning” your enemies online. It’s not just a way of getting clicks and likes online. It is somewhat more serious than, say, Lauren Southern sitting on a bed, showing cleavage, and slowly reading her 23 and Me results to thirsty orbiters. It is somewhat more serious than an unboxing video.

The Ukrainians might actually take a person encouraging their troops to desert in wartime — a capital offense — seriously enough to have a conversation with him, to take him aside for a moment of quiet prayer, even to make him disappear.

There’s a distinction between “justice justice” and “poetic justice,” and it would have been poetic justice if the reality of the war and death he was grifting off of came bursting into Lira’s online game, because none of this, ultimately, is a game. Halting white genocide is no game. But our movement is plagued by grifters and egomaniacs who treat it as just an online game.

That said, it would have been bad taste to actually hope that Lira was dead. I should note, however, that Lira wishes death on ethnonationalists. He’s not one of us. He’s not a friend. He’s an enemy. As our friend HapaPerspective has laid out, if Gonzalo Lira were dictator of America, he’d enforce the melting-pot. He’s an authoritarian multiracial civic nationalist. Sort of like Putin, for that matter. He’s an authoritarian civic nationalist who would make different peoples jump into the melting pot and come out uniform — 56% brown goo — and then give them little American flags to wave. One Volk, one Reich, through miscegenation. He’s opposed to ethnonationalism. He’s opposed to white identity politics, probably because his own identity is not fully white.

Politics is all about friends and enemies, and if you can’t tell that someone like Gonzalo Lira is an enemy of whites, you don’t have the judgment for politics. The same is true of Putin, for the same reasons.

I first encountered Lira a couple of years ago. A friend of mine sent me a link and said, “Here’s a guy giving advice to young men, like he wished he had gotten from his dad.” I clicked the link. The lesson was “Don’t fuck crazy.” Utterly vulgar manosphere stuff. I smelled a rat right there. After about five minutes, I turned it off and thought, “Okay, that’s five minutes of my life I’m never going to get back.” I hoped to never hear of him again.

Then he started leveraging his position in Ukraine for views, passing along Russian propaganda as if he were a neutral observer. I just rolled my eyes, because I knew this guy is our enemy. He’s not so terribly different, though, from Putin, so his position came as no surprise. Putin is a race-blind, authoritarian, civic nationalist who makes life for ethnonationalists like me absolute hell in his country.

The idea that we’d be better off under an authoritarian, Christian-branded, conservative-branded, multiracial civic nationalism is the dumbest take on the planet. But thousands of people on the broader Dissident Right are willing to buy this message because they put Christianity, conservatism, and indulging their own authoritarian personalities above the survival of the white race.

When Lira disappeared one of the most revealing reactions came from Scott Ritter, who in an earlier life actually did some good things. Now Scott Ritter is the guy offering here’s-how-Bernie-can-still-win mental gymnastics to spin Russia’s failed assault on Kiev as a tactically brilliant feint. This clown was also “praying” for “Gonzo,” as he calls him.

Ritter said “reports are emerging”  — I shudder to think from where — that Lira had been kidnapped, tortured, and executed by Ukrainians. Well, sorry to disappoint you, but Lira wasn’t kidnapped, tortured, or executed by Ukrainians. He’s back. He says he was detained and then released. Nothing that wouldn’t happen in any liberal democracy, frankly, if he were encouraging soldiers to desert in times of war and passing along enemy propaganda. But I don’t trust anything that comes out of Lira’s mouth. I’ll believe him when I see the Ukrainian arrest warrant.

I thought this really showed Ritter’s true colors. If he were a neutral commentator, he would have entertained various possibilities. Instead, he went right to the narrative that was maximally anti-Ukrainian. The Ukrainians are Nazis committing genocide! They have secret police who kidnap and torture people! The best explanation for why Ritter did this is that he’s just a contemptible shill. He might even like “Gonzo,” but that wasn’t going to stop him from exploiting his presumed death for maximum propaganda value. It is sad that Lira chose friends like this.

I hope that I won’t be hearing any more about Coach “Red Shill,” but, like herpes, he will probably never go away. The guy is an online narcissist. He’s an attention whore. As our friend Gaddius Maximus said, there is a strong Tawana Brawley vibe about this whole thing. This might just be an anti-Ukrainian hate crime hoax. Lira could have disappeared himself for attention — in which case, even saying this much about him is too much.