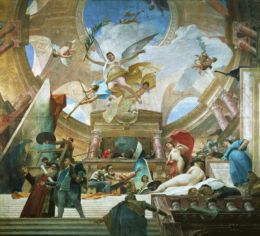 Apotheosis of the Renaissance by Mihály von Munkácsy

A specter is haunting the anti-culture: the specter of Western man digging for his own roots. For decades, the nefarious Leftist academics who have infested the educational system have had control over the Western canon, the classics, philosophy, literature, and high culture writ large. For all the things that the Left can do with all their power and influence over just about every institution, there is one thing they are still incapable of — a thing which seems so basic: to love the beautiful.

Due to this crippling Achilles’ heel of the Left, along with intellectual developments on the Dissident Right, it appears that we may be close to realizing a white world renaissance, similar to the Italian Renaissance, in which whites rediscover and solidify what “whiteness,” the West, and European culture truly mean, taking back the negative bourgeois connotations of the word which are used as a weapon by the enemies of Europe and her diaspora.

It is plain to see the current coastal elite’s complete ignorance of the Western canon in the way they spit their bile against Western culture generally. Increasingly, the elite is being staffed by mentally ill or simply hateful people who are in way over their heads. We have seen the rise of first the coastal Jew, but now, just as importantly, the skintellectual, in every facet of elite urban administration. Say what you will about Bill Clinton, but the man was probably a genius in terms of raw IQ. As for Kamala Harris, a woman second in line to the nuclear button, she is simply an actor. When she speaks, with all of her bluster and bullshitting, she sounds like someone who is playing the Vice President in an action movie. She sounds like she sounds like a politician, but she doesn’t sound like a politician. And don’t even get me started about resident Biden.

And if you think it’s that bad among a bunch of old geezers like Biden at the top, what do you think it’s like among the mediocre hordes of the future or recent inductees into elite institutions? The competence of these people is a whole separate discussion, but the cultural aspect is even grimmer, at least if you’re on the Left. Is anyone really under the impression that any of these people have read Shakespeare, Homer, or Livy at any time in the past ten years, or even their entire lives? They surely wouldn’t have been taught about it under the new educational jihad against the accursed “straight white males.” No, at best they perhaps brushed over Foucault’s SparkNotes once since graduating. They aren’t cultured, though they desperately want to be perceived as such.

But enough about these wretches; their fate is sealed. What of the Dissident Right? What is going on in that sphere, so as that we might be permitted some optimism in this world of black pills?

First, while the Right is not well known for its indulgence in the arts, the Left has completely dropped the ball in favor of deconstruction, and so the Right has picked up the slack as a result of its natural tendency for beauty. Articles such as MSNBC’s “Why the far-right is really into home fitness” showcase only a microcosm of this dichotomy. It is thus only natural that the potential for an inversion in this arena might present itself.

The Dissident Right in the West has transformed rapidly from a group largely composed of individualist anarcho-capitalist-centric people who show disdain for the arts and humanities — think Aaron Clarey – into a movement centered on these very things in an attempt to go get back to the roots they have lost or never known — from deracinated to “reracinated.” Seemingly out of nowhere, Dissident Right publishing houses such as Counter-Currents, Arktos, Imperium Press, Antelope Hill, and Mystery Grove are acting as Right-wing Gutenbergs, spreading a message long forgotten or scorned in an articulate way which it isn’t really possible to communicate through podcasts or videos. At the end of the day, for whatever reason, no one takes an ideology seriously if they can’t find well-written texts on the subject.

The Right-wing book industry is creating much opportunity for a vibrant culture that is reactionary yet also dynamic. On one hand, they repopularize forgotten and underrated works; this is Imperium Press’ primary focus, for example. On the other hand, they also publish new writers who wish to comment upon and add to the old, as well as formulate new ideas within the new modern context, much as Machiavelli did with Livy.

These publishing houses are acting as the catalyst for this renaissance of the Western arts and humanities. Recall that the Italian Renaissance was a result of the reintroduction of Roman texts and culture in Europe. Today we rediscover the classics, the works of the Counter-Enlightenment, and the German Conservative Revolutionaries. Recall that one of these scholars, Oswald Spengler, argued in Decline of the West that the Renaissance was a sort of counter-culture against Western society’s predominant culture. Is the Dissident Right not also a counter-culture at this point, now that the dominant culture is the anti-culture of drag queen story hour and Black Lives Matter? Many parallels therefore continue to support such a possibility.

With intellectual and literary backing, we may even see further developments in the physical world — what Nick Jeelvy has aptly dubbed a “dissident high culture” — through community building, the promotion of a wholly new style and aesthetic, and the arts. In the political sphere, the Dissident Right has gone from a ragtag group of disillusioned people reading Mein Kampf, and with little real-world organization outside biker gangs, into a movement consisting of some of the most intelligent political actors in the entire West, and they are rapidly approaching the ability to seriously organize politically. This has captured the minds of millions.

The hippies of the 1960s and the utopians of the nineteenth century may be seen as something not to only emulate, but to transcend. Achieving a similar consolidation within our own communities and its dissemination into the broader culture would certainly be a major achievement for the Dissident Right.

I imagine that every trailblazer in history was at one point in despair at their fate; and then they won. We must rejoice in the moment we are born in. What a calamitous time, indeed, but one still ripe with opportunity. I am optimistic for this “White World Renaissance,” so let us work diligently so as not to waste this historical moment.