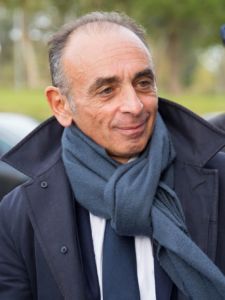 The French conservative journalist, pundit, and writer Éric Zemmour announced his candidacy for the presidency of France against current President Emmanuel Macron and National Rally’s Marine Le Pen in next year’s election, which will be held on April 10, in a video statement he released yesterday on YouTube. The following is a translation of his statement.

My dear Countrymen — For years, the same feeling has swept you along, oppressed you, shamed you: a strange and penetrating feeling of dispossession. You walk down the streets in your towns, and you don’t recognize them.

You look at your screens and they speak to you in a language that is strange, and in the end foreign. You turn your eyes and ears to advertisements, TV series, football matches, films, live performances, songs, and the schoolbooks of your children.

You take the subways and trains. You go to train stations and airports. You wait for your sons and your daughters outside their school. You take your mother to the emergency room.

You stand in line at the post office or the employment agency. You wait at a police station or a courthouse. And you have the impression that you are no longer in a country that you know.

This country — that you search for everywhere with dismay. No, your children are homesick, without even having known this country that you cherish. And it is disappearing.

You haven’t left, and yet you have the feeling of no longer being at home. You have not left your country. Your country left you. You smell foreigners in your own country. You are internal exiles.

And then you said it to your wife. To your husband. To your children. To your father. To your mother. To your friends. To your coworkers. To your neighbors. And then to strangers. And you understood that your feeling of dispossession was shared by everyone.

France is no longer France, and everyone sees it.

Of course, they despised you: the powerful, the élites, the conformists, the journalists, the politicians, the professors, the sociologists, the union bosses, the religious authorities.

They told you it’s all a ploy, it’s all fake, it’s all wrong. But you understood in time that it was they who were a ploy, they who had it all wrong, they who did you wrong.

It’s why we must preserve our architectural, cultural, and natural heritage. It’s why we must restore our republican education, its excellence and its belief in merit, and stop surrendering our children to the experiments of egalitarians and pedagogists and the Doctor Strangeloves of gender theory and Islamo-leftism.

It’s why we must take back our sovereignty, abandoned to European technocrats and judges, who rob the French people of the ability to control their destiny in the name of a fantasy — a Europe that will never be a nation.

Yes, we must give power to the people, take it back from the minority that unceasingly tyrannizes the majority and from judges who substitute their judicial rulings for government of the people, for the people, by the people.

For decades, our elected officials of the Right and the Left have led us down this dire path of decline and decadence. Right and Left have lied and concealed the gravity of our diminishment. They have hidden from you the reality of our replacement.

You have known me for many years. You know what I say, what I diagnose, what I proclaim. I have long been content with the role of journalist, writer, Cassandra, whistleblower. Back then, I believed that a politician would take up the flame that I had lit.

I saw that no politician had the courage to save our country from the tragic fate that awaits it. I saw that all these supposed professionals were, above all, impotent.

That President Macron, who had presented himself as an outsider, was in fact the synthesis of his two predecessors, or worse. That all the parties were contenting themselves with reforms, while time passes them by.

There is no more time to reform France — but there is time to save her. That is why I have decided to run for President.

I have decided to ask your votes to become your President of the Republic, so that our children and grandchildren do not know barbarism. So that our daughters are not veiled and our sons are not forced to submit.

So that we can bequeath to them the France we have known and that we received from our ancestors. So that we can still preserve our way of life, our traditions, our language, our conversations, our debates about history and fashion, our taste for literature and food.

We, the French, are a great nation. A great people. Our glorious past pleads for our future. Our soldiers have conquered Europe and the world.

Our writers and artists have aroused universal admiration. Our scientific discoveries and industrial production have stamped their epochs. The charm of our art de vivre excites longing and joy in all who taste it.

We have known great victories, and we have overcome cruel defeats. For a thousand years, we have been one of the powers who have written the
history of the world.

They will say the worst about me. But I will keep going amidst the jeers, and I don’t care if they spit on me. I will never bow my head. For we have a mission to accomplish.

The French people have been intimidated, crippled, indoctrinated, blamed — but they lift up their heads, they drop the masks, they clear the air of lies, they hunt down these evil perjuries.

Long live the Republic, and above all, long live France!

» Preparing for the Midterm Elections . . . & Worse to Come