“It Sounds Possible that the Revolution Has Started in Wisconsin” 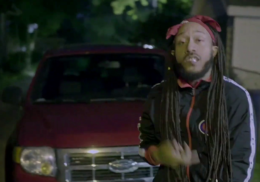 Darrell Brooks, Jr. in front of a red SUV in his rap video, “Half a Tikkit.” He performed under the name “MathBoi Fly.”

On Sunday afternoon, a Christmas parade in Waukesha, Wisconsin turned into a slaughter when the driver of a red SUV ran the marchers down. The Milwaukee Journal Sentinel gave a rundown on the victims:

Nearly 50 people were hurt in the attack, including members of a girls dance team, a Catholic priest, and a group of dancing grandmothers known as the Milwaukee Dancing Grannies.

Four of the grandmothers were among the five deaths in the incident. Also killed was a team member from Citizen Bank who was walking with a parade float and was struck, the business said in a statement.

Nearly 50 people were injured and five people died during the incident, according to police. The victims range in age from 52 to 81.

Officials at Children’s Wisconsin Hospital in Wauwatosa said Monday they are caring for 18 patients who were hurt in the incident. Eight children underwent surgery for their injuries since Sunday, the officials said.

Three sets of siblings were among the patients, hospital officials said.

The suspect is Darrell Brooks, Jr., according to the Washington Examiner. Three days prior to the massacre, quite similar to a “truck of peace” attack, he had bonded out of jail for $1,000. The article further states:

On a Facebook page belonging to Brooks, he wrote about the three-week, headline-grabbing Kyle Rittenhouse trial, which had taken place about an hour away from where he lived. Rittenhouse was found not guilty on Friday on five criminal charges after opening fire during a riot in Kenosha, Wisconsin, killing two people and injuring a third. His Facebook page was also filled with religious sayings.

It’s not specific about what Brooks had to say about the case, or what religious sayings this man of God had written.

Was the massacre in response to the Rittenhouse verdict? One BLM activist thinks it might be, according to another Washington Examiner article. He went to the scene of the crime to do a livestream — what impeccable taste he has! — and opined:

As for alternative explanations, I predict that it won’t be long before some Leftist bedwetter in the mainstream media tells us it’s because Brooks had a rough childhood.

Who is Darrell Brooks, Jr.?

The Milwaukee Journal Sentinel article didn’t provide a picture of the suspect, despite an extensive photo gallery. Neither did the above-referenced Washington Examiner article, despite decent reporting otherwise. However, the Daily Mail was kind enough to provide some, which were about what one might expect.

It also revealed that he was an aspiring rap star (see this video below) with a rap sheet going back to 1999. As for the domestic donnybrook that he’d bonded out for $1,000 a couple of days prior to the attack, an excerpt of the police report is shown in which it is described that he punched his former girlfriend and then ran her over with his SUV. There’s a lot more to the article than that. All told, he seems like a very community-conscious citizen.

If he indeed was the one who drove through the parade, then he’s an idiot who needs to be put away for the rest of his life. If he was motivated by the Rittenhouse verdict, then the biased Leftist presstitues of the mainstream media who lied to the public about the case are to blame as well. They ran it through their narrative filter and tried to make martyrs out of the serial child molester and the domestic batterer who brought a skateboard to a gunfight.

It wouldn’t be the first time their mischaracterizations have inspired violence in the easily misguided. The media lies, people die.