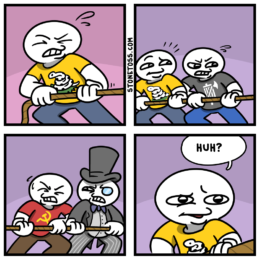 It is interesting that the Left considers the populist Right to be its ultimate enemy. While libertarians and bargain-bin conservatives are also seen as enemies, they are considered a secondary threat. If you believe the establishment narrative — as most Left-wingers do despite their claims to being unorthodox and outside the mainstream –, it should actually be the establishment conservatives who are their greatest threat. Unlike the Dissident Right, which wields little power by its very nature as a dissident movement, the neocons and normie-cons actually do have some institutional power, dwindling as it may be. They have billionaires funding their candidates; we don’t. Shouldn’t the far Left be focusing mainly on the mainstream Right’s elite? Here I will attempt to address this “socialist-nationalist paradox.”

It is well-known that today’s Left has allied itself with those they claimed to be the ultimate antagonists to their cause: Big Business. We saw this notably when the antifa Twitter account “Eyes on the Right” posted that they would never ally with the populist Right in taking down the hedge funds by inflating GameStop’s stock. Clearly, Goldman-Sachs is considered less of a threat to their status quo than anonymous far-Right Twitter accounts or Stormfront. Other than the Cathedral institutions, it is these fat cats who hold true power — and yet the far Left focuses on the Dissident Right sphere, despite the fact that ironically we agree with much of what the Left has to say on economic issues and the proletariat. I am of course referring to those of us who find ourselves fighting against two monstrosities: the leviathan of economic nationalism on the Right and the behemoth of social liberalism on the Left.

Many of us indeed find ourselves reading Karl Marx and largely agreeing with him — although mainly only with his critiques of capitalism. When one reads his private letters and other works, one may gain the impression that we on the Right are, in a way, closer to Marx than the “post-Marx Marxists” who, in a doublespeak dialectic which we are all familiar with, claim to be both Neo-Marxists and simultaneously that Neo-Marxism is a conspiracy theory. Consider how Italian Fascism itself stemmed from the Futurists and disenchanted socialists. Many upheld an ideology very reminiscent of the pre-Fascist Left even after the war. Fascism itself, an ideology that is difficult to define although not inaccurately described as “national corporatism,” is in large part a Rightist reinvention of the Left-wing ideology of syndicalism. I would certainly not claim that the far Left is in any way our brothers, or even our cousins. Rather, I am simply pointing out that we in large part agree with them on more things than we do compared with those in charge, whether they be the establishment Left or “Right.” This animosity seems to come from nowhere.

It is nothing less than incredible how these atheists can operate with such religious zeal. Even the far Right, where most of us are guided by some sort of divine or metaphysical creed or sacred code, would be more willing to work with these apostles of the Great Adversary than against them. Why? I believe the answer to this grand question essentially boils down to potentiality, not power. I am reminded of Peter Hitchens, who would often go on tirades — and rightly so — concerning the fact that all the major parties in the United Kingdom are essentially elected bureaucrats. They agree on “progress,” but simply differ on the way to get there in terms of a few preselected issues which are largely inconsequential. The fact that any “conservative” Tory could possibly claim that “the best is ahead of us” boggles the mind, but paints a picture as to the naiveté at best and cynicism at worst of our so-called “representatives.”

It is no different in the United States, where the neocons, Israeli sycophants, yokel Right, big business simps, police simps, and libertarians have formed a completely unthreatening coalition and are represented by the GOP. The false dichotomy of the Reds on one side and the Blues on the other is no different than in Hitchens’ United Kingdom, where both sides agree on the vast majority of issues, while only “disagreeing” on a few choice issues which are designed to get their voters out. Of course, even those few areas where they disagree are rarely ever addressed in any real sense, and even when they are, the social Left and economic Right always find a way to come out on top while the economic Left and social Right invariably and miserably fail to achieve anything.

The far Left has clearly made their peace with this process, while the grassroots Right has not. Woe be to the grassroots Right. The truth is that the Left cares more about legalizing child rape and exterminating whites than “workers of the world unite” or any other economic platitudes. Indeed, they are Neo-Marxists and not Marxists (like Slavoj Žižek, for example) for a reason. When it comes to our so-called representatives, they care more about Israel and cheap plastic crap from China than they do about healthy families and the welfare of the middle class. Why should the Left care about their impossible communist utopia anymore? With capitalism and simultaneous state support, not only do they get an excuse to riot and have fun, but they get first-day Amazon delivery on sex toys and Soylent products. “Post-scarcity has been accomplished, comrades!” — and yet it was through late-stage capitalism that it was achieved. Oh, the irony.

The establishment Right and Left have already determined who are to constitute the New World Order, which can only be described as the worst ideas of the Left and Right fused together into a sandwich put together by the kosher Right and Left. Thus, the only real dissent is coming from the nationalist Right and, to some extent, the “scumbag Left.” It is no surprise, then, that the scumbag Left is already undergoing liquidation after being subjected to scrutiny from their own side. Perhaps Trotsky will be their patron saint. As for the Dissident Right, we are for a mixed economic system — ironically similar to the economic program that the far Left claims to endorse –, but combined with Rightist social policies. Because of this, we are by default persona non grata in the political world.

I doubt that these quite frankly moronic characters would have come to this conclusion on their own. If it weren’t for an establishment who stoked the flames of division against us, they would probably still be camping out on Wall Street in tents, protesting against their — or rather our — real enemies. Was it not the “woke” anti-philosophy that sprouted up in the Occupy Wall Street movement? This can be no coincidence. What is truly disappointing is that the Left who were actually over the target in the aftermath of 2008 were so easily swayed and their energy directed against the proletariat they believed they were, or at least pretended to be, fighting for. Despite all the talk of the elites pitting the lower classes against each other and thus against our class interests, the far Left is a far greater example of this phenomenon.

This is the true reason for the Left’s hatred of those who are closer to them on the important issues. Unlike the kosher establishment Right, we are actually serious about what we say and have legitimate beefs with the uniparty, which poses an actual threat to a potential alliance between the dissident Left and Right. The establishment Right is only a front to push the interests of capitalism, only pretending to support social conservatism — and less and less so at that, while the Left is precisely the opposite: only a front for economic populism that will never benefit those besides the hoodrats and the billionaire class through subsidies. The elite capitalists will always be happy to fund their shock troops for a small tax while getting their Wall Street “pizza parties” legalized. Meanwhile, the chump Left will always be happy to allow for billionaires to get subsidies as long as they themselves get a shred of artificial status and their funko-pops arrive on time. They only needed a “friendly” establishment to guide their thoughts for them to realize that being a Janissary of the system is much more rewarding than being a dissident. This betrays their actual materialist motives more than anything else.

It is only the grassroots Right which poses any meaningful opposition to the universal decadence offered by the establishment Left and Right’s kosher sandwich.