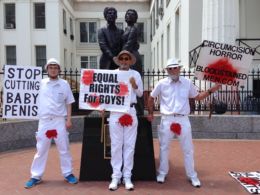 Moving en masse on city streets with their white button-down shirts and white pants, the men cut quite a figure. Clad head-to-toe in white and moving as if they’re on a vengeance mission, they are reminiscent of the futuristic British droogs in the Anthony Burgess novel and Stanley Kubrick film — until you notice that they’ve splattered their crotch areas with bright red paint.

Call it A Crotchwork Orange.

They call themselves Bloodstained Men, and they’ve taken to the streets to protest the routine genital mutilation of male American infants in the form of circumcision. Preaching the values of “Genital Integrity for All” and “Foreskin Positivity,” the loose consortium of self-proclaimed “intactivists” was founded in 2012 and travels to an estimated 60 American cities per year, startling passersby with their giant red crotch stains and placards that scream with slogans such as:

I WANT MY FORESKIN BACK

GENITALS SHOULD NOT HAVE SCARS

I REGRET CUTTING MY SON’S PENIS

IT’S NOT YOUR MOTHER’S PENIS

We wear all white with red paint on our crotch to represent the wound that was inflicted on us, without our consent, when we were children. We find that this is a very striking costume and it gets people’s attention, and it makes them realize that when you cut a baby’s penis you are forever damaging the penis of the man he will become. This is a permanent, unnecessary, harmful alteration to the genitals of a perfectly healthy child.

I was born in the early 1960s and went “under the knife,” as did 90% of American males at the time, but it wasn’t until I accidentally stubbed my toe on a story about Bloodstained Men while poring over the news that I pondered whether being forcibly subjected to painful genital mutilation at birth may have contributed toward my anger-management issues and propensity toward violence.

As a fan of, but never a participant in, hysterical political street theater as well as a lifelong admirer of rhetorical hyperbole, I’ve spent the last 24 hours amusing myself at the desperate passion of Bloodstained Men and similar groups such as Intaction and Saving Sons. It would be inaccurate to refer to such foreskin-defenders as “brothers in arms,” but I feel that describing them as “spiritual brothers dedicated to the preservation of the third leg” joins them all together under one giant stretched-out skin tent.

I’ve never been one to avoid videos titled “I feel maimed and I feel mutilated” or books that are titled Unspeakable Mutilations but then have the contradictory subtitle Circumcised Men Speak Out.

According to one source, the negative effects of f0rced postnatal circumcision include, but are not limited to:

Hold on — anti-Semitism? Upon sober reflection, I suppose it makes sense. Not only are Jews almost universally circumcised — it’s mandated in Chapter 17 of Genesis — but certain subsects of ultra-Orthodox Jewry practice metzitzah b’peh, which involves sucking the blood from a freshly-circumcised infant’s penis and, according to the venerable New York Post, has resulted in at least two dozen cases of infant herpes in New York City since the year 2000, as well as two deaths and two cases of brain damage. Metzitzah b’peh was allegedly first mentioned in the Babylonian Talmud, but Bloodstained Men’s David Atkinson dismisses the notion that intactivism leads to Jew-hatred as “a bunch of nonsense. . . . Circumcision is anti-Semitic itself because it harms Jews.” Proving that Jews can fall on either side of the Foreskin Question, there’s even a 98-minute video called “Jews Against Circumcision.”

Considering that circumcision is also mandatory throughout the Islamic world, one could also make a case that intactivism is Islamophobic.

And since female genital mutilation is now considered beyond the pale while male circumcision is largely deemed to be no big deal, taking pro-foreskin agitation to the streets may also appeal to the wounded egos and scarred pleasure centers of large swaths of the manosphere.

Anti-Semitism, Islamophobia, and misogyny all wrapped up tightly in the same skin tortilla — I’m tellin’ you kids, this has the potential to become the latest Dissident Right cause célèbre!

Feast, if you’re so inclined, on the deep emotional pain evinced in the testimonials of men who are told that they were born into a patriarchy but were instead birthed in a climate where part of their manhood was ripped screaming from their bodies the moment they sploshed out of their mother’s womb:

I [too] was raped and mutilated as a baby. Taken away to a dark corner of a hospital strapped down while knives and clamps were put to my most precious sacred body part. A good lesson taught to us at birth with sugar stuffed into our mouths [common infant pain relief] as we suffer the worst pain of our whole lives. With no coping mechanisms and no support from family or society we are left to stoop ourselves into drugs and alcohol with no understanding or escape from a sense of violation in the deepest parts of our psyche.

I didn’t ask for this . . . blades, sharp objects, can-opening devices are put to my most sacred body part. I’m just absolutely raped, abused, filleted open, as if I’m some kind of experiment.

I hate my parents! I can’t imagine what physical pain and psychological damage I’ve gone through when I was only one day old!! When it wasn’t necessary!! . . . A baby infant boy deserves to be cuddled just like a baby girl, not to be strapped down and have a sensitive part of his body which he owns by birthright chopped off. . . . I hate my parents and I hate that I hate them but I can’t help it!!

The intactivists even claim that the deep trauma of forced infantile circumcision has led to suicide.

Jonathon Conte helped launch Bloodstained Men with a red-crotched protest outside the 2012 American Academy of Pediatrics Convention in New Orleans. Four years later, he killed himself.

At the age of eight months, Canadian infant David Reimer underwent a botched circumcision with an electrocautery needle that burned his entire penis off his body. At the urging of a physician from Johns Hopkins, his family elected to transform David into a little girl named Brenda. But his male instincts eventually triumphed, and David spent much of his later years as a man with a surgically implanted penis whose longsuffering wife endured his volatile mood swings until the day David blew off his own head with a shotgun at age 38.

The Intaction website relates the story of a young man identified only as “Thad” who was said to have killed himself due to circumcision’s lingering trauma — although it doesn’t even attempt to explain why, at least not to my satisfaction, especially since Thaddeus is my middle name.

The modern defenders of infant penile mutilation — such as the American Academy of Pediatrics — argue that “the health benefits of newborn male circumcision outweigh the risks.” They list some of the risks of having an intact foreskin as “urinary tract infections, increased chances of STDs including HPV, HIV and . . . penile cancer.”

A remedy which is almost always successful in small boys is circumcision, the operation should be performed by a surgeon without administering an anesthetic, as the brief pain attending the operation will have a salutary effect upon the mind, especially if it be connected with the idea of punishment.

In 1894, Dr. Peter C. Remondino of the National Popular Review wrote that “the wholesale circumcision of the Negro race is an efficient remedy in preventing their predisposition to discriminate raping so inherent in that race.”

While modern opponents of circumcision don’t generally tend to be as dramatic and bombastic as groups such as Bloodstained Men, they claim that botched circumcisions cause hundreds of male infant deaths yearly that are sometimes hidden on death certificates with alibis such as shock, sepsis, hemorrhage, or seizure. They say that next to appendectomies, circumcision is the second-most common surgery in America and thus represents a billion-dollar industry that is almost entirely unnecessary. They point out that circumcised infant foreskins can fetch a pretty penny on the medical-research market, with none of that money going to the parents or the mutilated baby. They also allege that science has yet to come to grips with the lifelong toll of psychological pain and diminished sexual pleasure wrought upon the male half of the public as a result of what is largely an outdated and barbaric practice.

The day my son was born in July 2008, doctors asked me and his mother if we wanted him circumcised. Based merely on aesthetics — the pachydermal appearance of the uncut penis and rumors that smegma would be an olfactory nightmare for his eventual female partners — we assented to the procedure.

About an hour later, when they returned him to the hospital room fairly roaring in unhinged pain, we regretted the decision and have regretted it ever since.

I mean, he’s not even Jewish.

Nearly 20 years ago, I had an idea for a horror movie wherein the discarded foreskins in a dumpster behind a hospital magically congeal and resurrect themselves as an all-consuming pink monster that preys upon obstetricians who line their pockets by mutilating boys’ genitals.

I think it’s time I finally wrote that screenplay.